COLUMBUS — Nothing about managing three quarterbacks at Ohio State comes with a black-and-white blueprint.

The Buckeyes have confidence in all of them. They also know only one can play at a time.

The Buckeyes have to prepare a starter for the opener. They also want to develop the entire unit and have the next two guys ready to step in at a moment’s notice over the course of a long season.

The first-team reps eventually need to be focused on the guy leading the battle. Ohio State also doesn’t ever want the competition to stop in practice.

It’s a delicate balancing act for Buckeyes coach Ryan Day, both in the short term given the obvious importance of getting the decision right at the most critical position on the field for a national-title contender and into the future in this new age of college football with free transfers. So, there’s really no clear-cut answer for a situation that will have to be evaluated daily — and settled on the field. 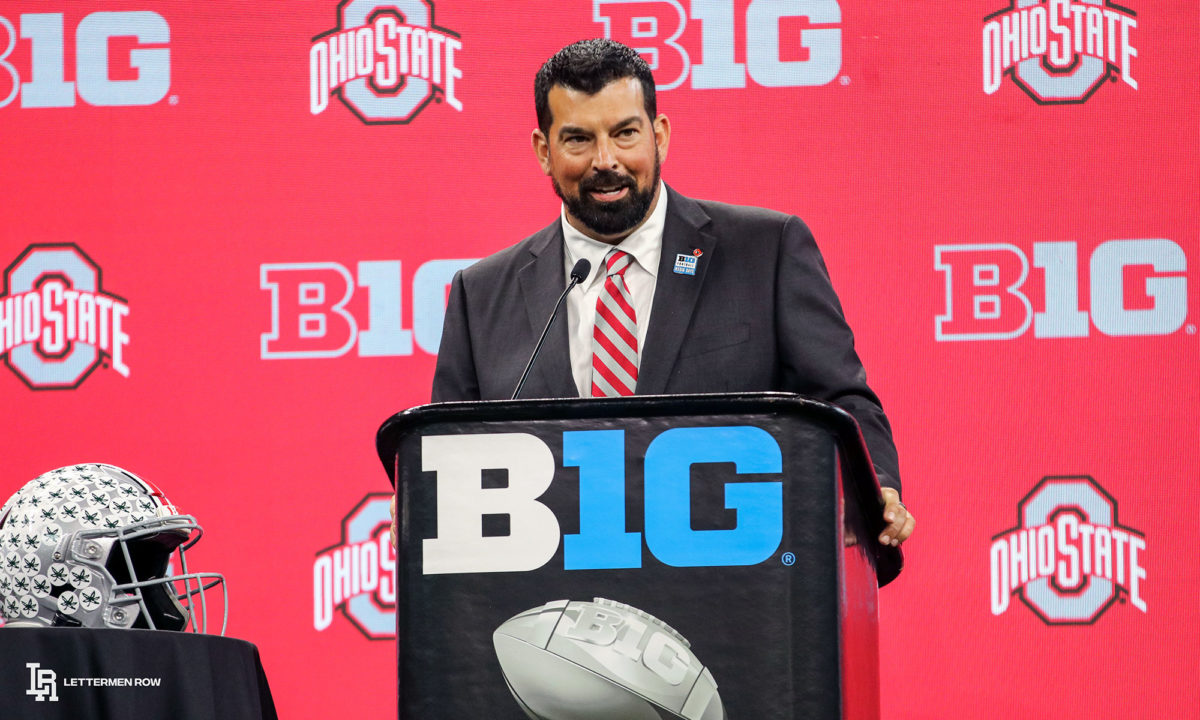 “I’m not going to put a date on it,” Day said on Friday at Big Ten Media Days. “But you’d like to have it [decided] by the first two weeks of the preseason in a perfect world, so that you can start to get the reps ready to play in that first game. But even still, we’re still going to spread the reps around. There are going to be three guys in this thing all the way to January or as long as we can play. But I guess if you’re looking for a kind of a ballpark, it probably be about two weeks in the camp.

“I mean, it’s even to me. We’ll see how these guys have changed over the last few months. I think they’ve all done a really good job. Their bodies look like they’ve changed, they’ve gotten stronger, they’ve gotten faster. So we’ll have a better idea once we get on the field and start practicing. But we kind of look at the spring as 15 practices. And then Practice No. 1 of preseason is like Practice No. 16 and a body of work. But I’m interested to see what they look like as they come out.”

The Buckeyes have been patient with the process so far, which is no surprise since Day has been through this before and didn’t rush even when it seemed obvious that Justin Fields would eventually win the job two years ago.

The same was true when Day was working with Dwayne Haskins and Joe Burrow before that, consistently avoiding any temptation to provide real-time updates or make snap judgments on small sample sizes. Day’s methodical approach gives him the maximum amount of information before making a seismic decision, but it also works in favor of the quarterbacks who don’t have to stress about losing the job thanks to one bad throw.

“Very close [competition],â€ Day said. “The thing Iâ€™ve been talking about and thinking about and want to make sure that they understand as we head back into the next couple weeks â€” and Iâ€™ll sit down and talk to them all about it â€” is that itâ€™s not just about winning the job and playing the first game. Itâ€™s a long way to December and January and everything else. Weâ€™re going to need all of them. I know in my heart weâ€™re going to, so they have to focus on development and getting better. When they have the opportunity to play, then let the rest of the chips fall where they may.

“Obviously as we get closer on this thing, weâ€™re going to have to prioritize some of the snaps. But weâ€™re going to try to spread them out as best as we can, at least for those first two weeks.”

The situation can still change from there, and Ohio State will obviously get new information to add to the decision-making process once the games actually begin. 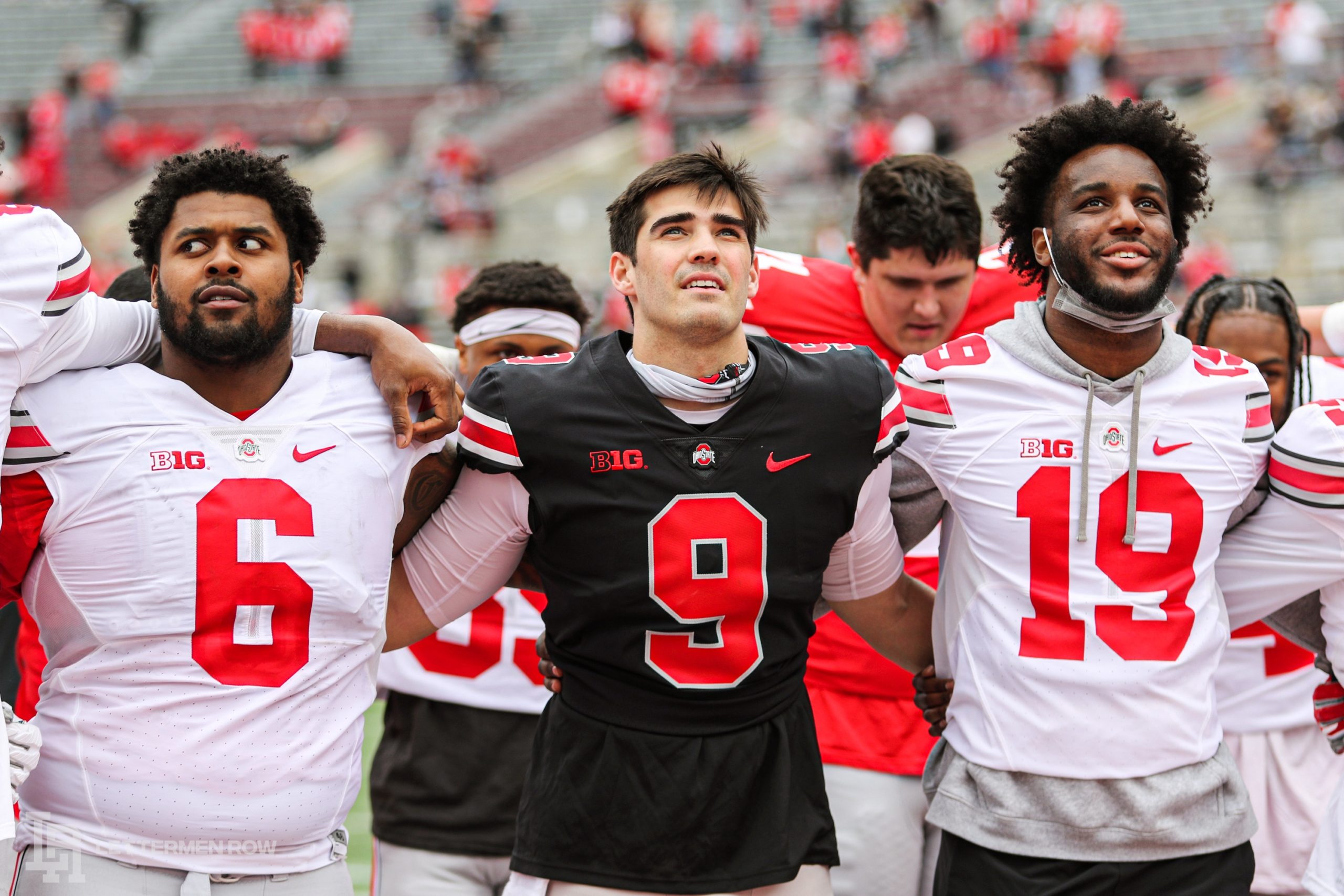 How long the leash will be with a first-time starter becomes a different question than preparing one in training camp, of course. That’s another incentive for the Buckeyes to rotate practice snaps as long as possible in case it needs to make a change for any reason — at any point of the season.

That decision will also come with implications for the future, and another five-star commit is waiting in the wings to come compete with those talented Buckeyes next year. But all that really matters for Day right now is what happens on Aug. 3 when camp opens, and the rest will just have to play itself out over time.

“I don’t know what this is going to look like moving forward,” Day said. “If I did, I would probably sleep a little better right now. But I do know that we want to have that room be be around for two to three to four years, so that we can have experience as we head into December in January. That’s one of the things we haven’t had. We’ve had really good quarterback play with Dwayne and Justin, but not a lot of experience where you know it’s a third-year starter. We had that with J.T. [Barrett] and that was great. But we’re trying to get that again.

“I mean, we’re going to play the best player. That’s what it’s going to come down to.”

The Buckeyes need to figure that out relatively quickly in August.

But even when they do, that doesn’t mean the quarterback competition is over.