COLUMBUS — Ohio State is steadily checking off the mile-markers on the road back to a normal camp.

There was no delay for the first practice, for starters. The Buckeyes have now made it to Week Two. They even got to head outside for a workout on Monday morning.

Up next: Putting the pads back on and really getting back to business.

Ohio State will have that opportunity on Wednesday. And that session will immediately put the Buckeyes ahead of schedule compared to last year’s COVID-shortened spring.

“Really for a great portion of our entire team, their first padded spring practice will be on Wednesday,” Ohio State coach Ryan Day said after the workout on Monday morning. “We didn’t get to pads last spring, so that’s exciting to see. It’s early on, we’re still installing.

“It’s very, very important. We actually got outside for team practice, which was nice. It feels like things are somewhat getting back to normal. … Now we’re really getting to the meat of it.”

The Buckeyes know better than to take anything for granted, particularly after having another brief pause in team activities just two weeks ago.

But everything remains on schedule at this point, and that alone is worth celebrating for Ohio State at this point — especially since the program will actually get to simulate real football in pads this week. As the Buckeyes get ready for Practice No. 3, here is what Lettermen Row learned from Ryan Day’s update on Monday. 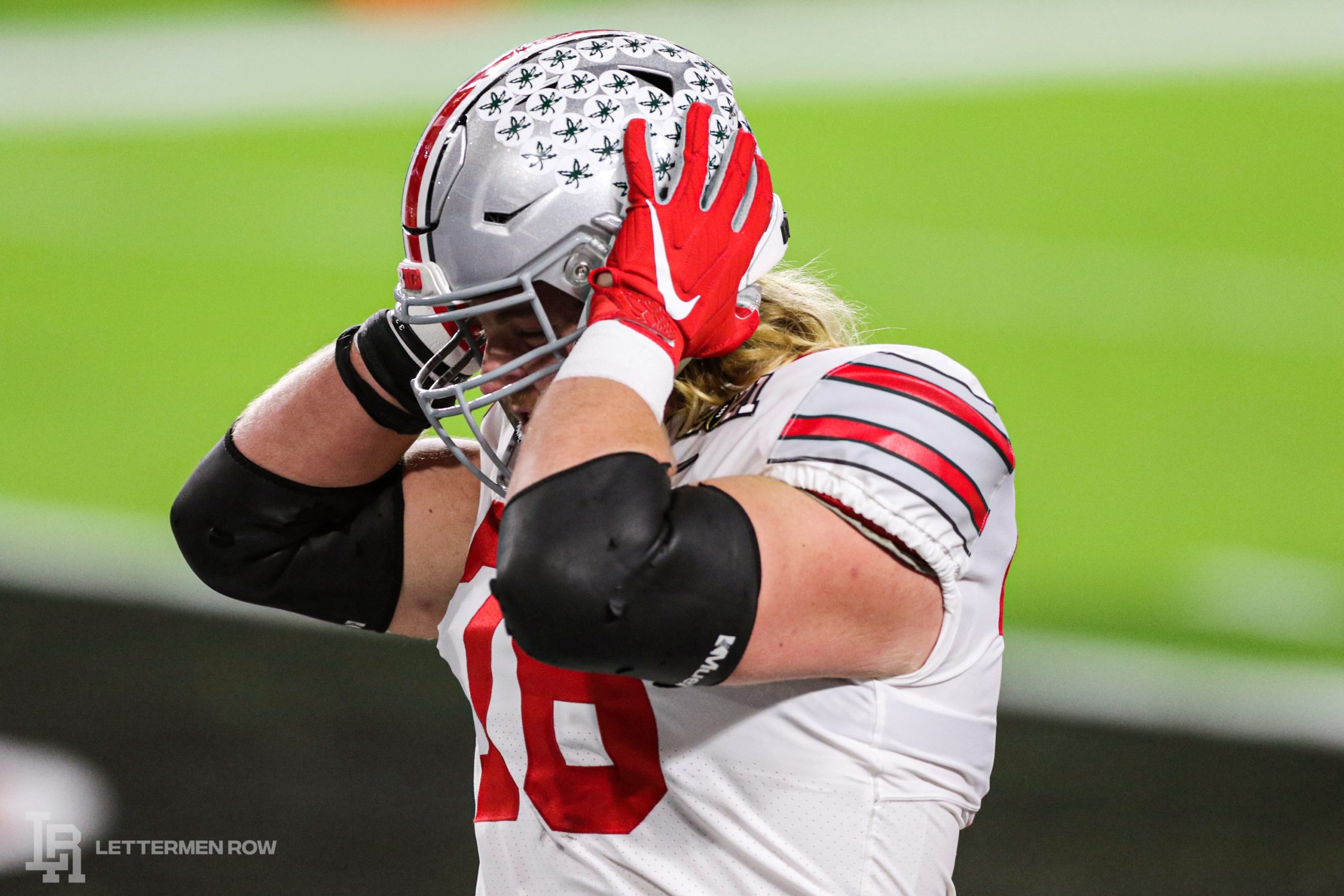 The projected starter at center is likely going to be limited until the end of camp. And while that obviously isn’t ideal for Harry Miller as he transitions to the middle, the Buckeyes can at least find a silver lining in their search for more positional versatility and flexibility.

Coming off his first year in the starting lineup at guard, Miller is still the odds-on favorite to be the first-team option to handle snapping duties. But what Lettermen Row sources described as a labrum issue throws a slight wrench into those plans and puts his development on hold for now, while also opening up reps for Luke Wypler or Matthew Jones in the competition to replace Josh Myers.

“Now how does that fit in terms of position specificity? That’s what it comes down to over the spring, but the more guys can do, the more value they have.”

There was no grand announcement about his future. Demario McCall just quietly went back to work, reported for practice on Friday and is now officially on the roster for as a Super Senior for Ohio State.

The mercurial wide receiver has taken advantage of the bonus year of eligibility the NCAA approved to all players last season, giving the Buckeyes another versatile athlete who could provide depth on offense or special teams. And it gives McCall one more final shot to make an impact with the program.

“I thought Demario’s attitude and work ethic had been really, really good this offseason,” Day said. “Off the charts. Very impressed with him. It hasn’t always gone the way Demario has wanted his career to go, and to try to find a role in the offseason, he’s tried some different things. We’ll continue to look to find that, but if he continues to work the way he does and keeps a great attitude, then good things are going to happen for him.” 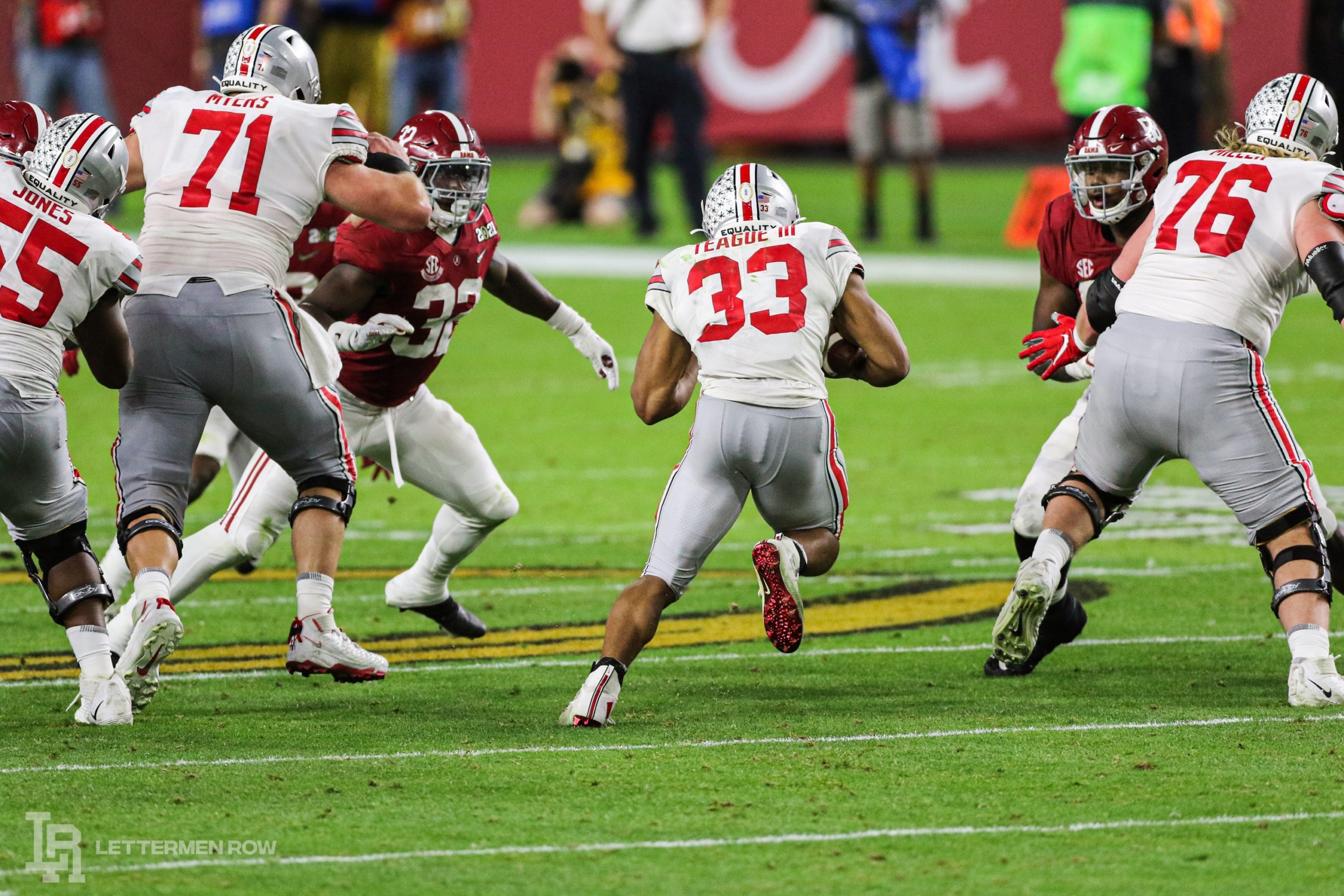 Master Teague has spring lead for Ohio State at tailback

The battle is only just beginning at tailback. But the slate wasn’t entirely wiped clean for Ohio State.

Thanks to the proven experience, leadership and a chance to build his body with a healthier offseason, Master Teague has earned the right to have the first shot at the starting tailback job in camp. That doesn’t guarantee anything thanks to the rise of Miyan Williams, the full-speed return of Marcus Crowley, a solid winter for Steele Chambers or the arrival of touted recruits TreVeyon Henderson and Evan Pryor. But it does give Teague at least some built-in advantage in the race for carries.

The acclimation period is now over for Ohio State as the pads go on this week.

So, what were the Buckeyes evaluating during the first two practices without them? The focus was on fundamentals and installation, and Day was primarily tracking the ability to learn quickly and the energy players brought to the field.

“It really just comes down to how much effort they’re giving,” Day said. “Then after you have the first practice, how well do you make the corrections on the field from the day before? If you’re making the same mistake twice, then something is not right. Really what it comes down to as you start to stack the practices, everybody can have energy on the first day of practice, but who can continue to bring it every day? How do you do that?

“You take care of yourself, you recover, you take care of your body, you get your sleep. That sounds like an easy thing, but for a lot of guys it’s not. It’s time management, it’s organizing the academics, it’s taking great notes so you can correct it on the field. When you start to put it all together, some guys kind of take off and some lose steam. That’s what is going to happen as we start to get into the meat of this spring practice.”