COLUMBUS — The talent in the Ohio State wide receivers room starts at the top.

Brian Hartline doesn’t catch passes for the Buckeyes anymore, of course. But in short order, the former standout with the program and at the NFL level has become a superstar in the coaching profession as well, setting the standard for a unit that is widely projected to be the best in America.

Hartline is maximizing production from the roster. He’s restocking it with recruiting classes that are breaking records on a yearly basis now. And he’s doing it all in a place that is home, which means there are no signs of his breakneck pace slowing down with the Buckeyes any time soon.

“I think my passion lies in this receiver room,” Hartline said last offseason. “I love coaching the wide receivers. There are a lot of coaches who say theyâ€™ll never leave, and never is a long time. But being honest, realistically I donâ€™t see a situation where hopefully Iâ€™m out of here any time soon. Hopefully Iâ€™m here for a long time and that Iâ€™ve earned it year in and year out.

“I have a strong passion for Ohio State. Iâ€™m from two hours from here, my wife is from Columbus, her family is here, my family is only two hours away, I have friends from high school who live here. Iâ€™m very passionate about Ohio State, and at this point, itâ€™s really early. I donâ€™t want to sound ignorant to the facts, but I donâ€™t know what would get me out of this city, frankly — unless Iâ€™m just not good.”

Turns out that isn’t a concern for Hartline or Ohio State. Heading into spring camp in two weeks, the Buckeyes have a group of receivers that is the envy of college football. How will the program manage it all? Lettermen Row is continuing the Spring Forecast with a closer look at the wideouts. 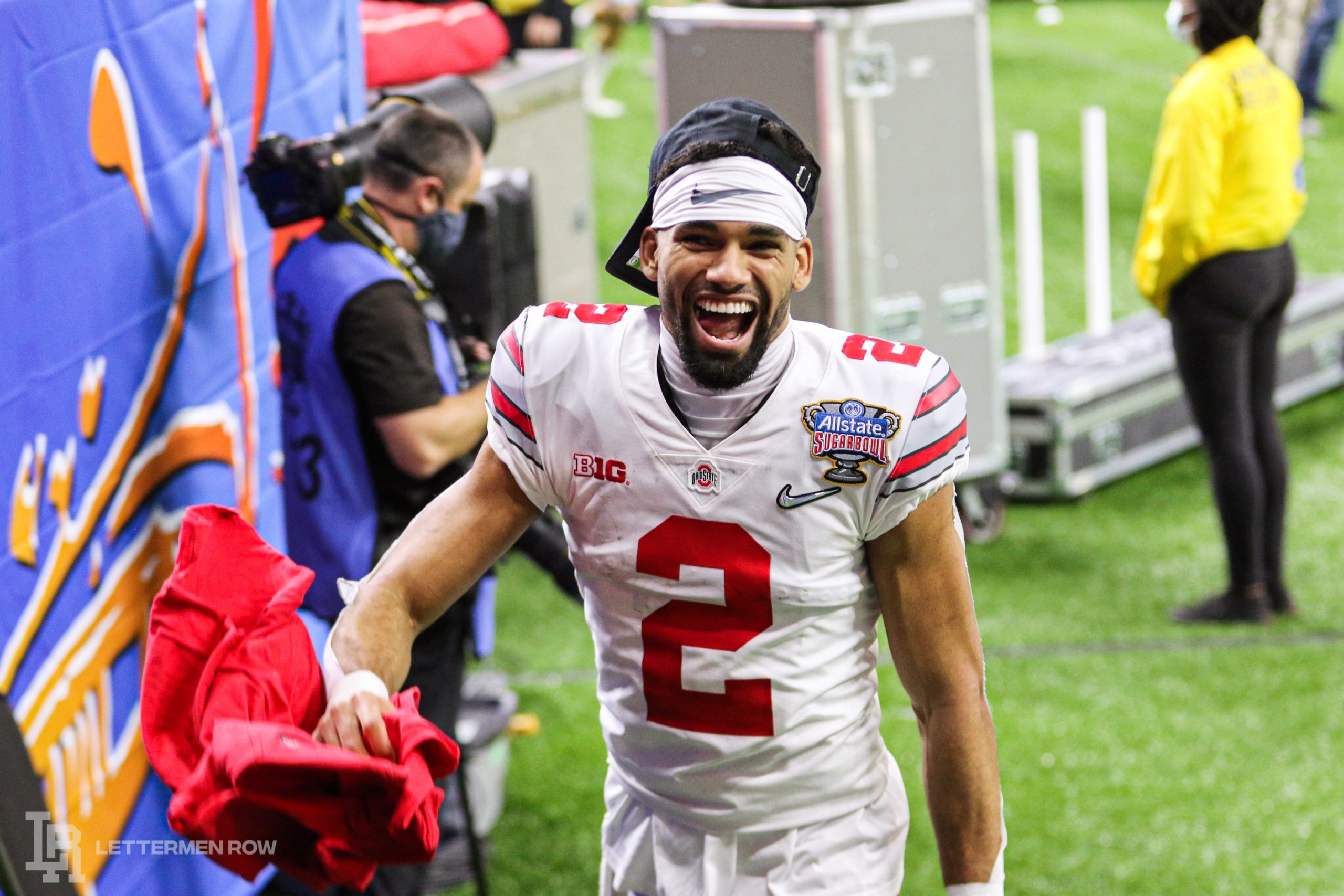 The Stakes: Buckeyes expected to be nation’s best unit

Ohio State was going to be loaded at wide receiver no matter what. But the return of Chris Olave raised the ceiling even higher for the Buckeyes this season, an unexpected bonus that will only make the passing game more dangerous regardless of who takes over at quarterback. The combination with Garrett Wilson gives Ohio State the best one-two punch in the country, and from there Brian Hartline can mix and match to supplement the rotation to attack defenses just about any way imaginable.

There is pressure that comes with living up to high expectations. But Olave has already shown how he responds to adversity with another breakout campaign on the heels of the misstep in the Fiesta Bowl the season before, while Garrett Wilson has thrived under the five-star spotlight with the Buckeyes. There are some relatively unproven second-year players who will have to take the same steps forward, but the blueprint is already in place.

There’s only one football, so there isn’t an unlimited amount of catches to pass around for the Buckeyes. Having a pair of superstars back means a healthy dose of footballs are coming the way of Chris Olave and Garrett Wilson, so at least a little more patience might be required for surging sophomores Julian Fleming, Jaxon Smith-Njigba and Gee Scott or deep-ball threat Jameson Williams. Barring a major breakthrough early, that goes double even for touted freshmen like Emeka Egbuka, Marvin Harrison and Jayden Ballard.

But the Buckeyes will still find ways to use all of those guys as they get back to the preferred six-man rotation that keeps everybody fresh and involved. The competition for the last spot or two is going to be intense since everybody in the mix was at least a four-star recruit, but that iron-sharpens-iron approach has been key to elevating that unit to the nation’s best over the last few years.

No bold prediction is required for Garrett Wilson or Chris Olave: Those are proven stars who are going to torture opposing secondaries again this season. Truthfully, there’s really not much about the Ohio State wideouts that would qualify as surprising considering how elite the recruiting at the position has been recently.

But the next wave is going to prominently feature Jaxon Smith-Njigba and Julian Fleming, and both showed during limited opportunities a year ago how special they could become. Their freshman campaigns weren’t what they envisioned, but Smith-Njigba has already delivered a jaw-dropping touchdown that will be on highlight reels forever and Fleming stepped up in a pressure-packed situation in the Big Ten title game when Olave was out with COVID. With another year of working with Brian Hartline under their belts, look out for the next step in their developments.