COLUMBUS — In Ryan Day’s mind, there is no separation between spring practice and training camp for Ohio State.

The collective journey includes both, with one simply serving as the starting blocks and the other as the finish line.

So, the Buckeyes won’t look at the first six workouts as being nearly halfway done with the process of building a depth chart, even though there is obviously a lengthy layoff in pads between the final scrimmage in the Horseshoe in mid-April and the first day in pads in August. And it also means there won’t be any sneak peeks at any kind of official depth chart for Ohio State with so much time left for it to change.

“We’re rolling right now,” Day said. “We’re kind of just rolling guys at different positions. We do kind of some different drills, half-line things, seven-on-seven — and then even in the team work, we’re kind of rolling a bunch of guys. We typically have two teams, and then the threes and twos kind of get mixed in as we go.

“So we just want to get our guys a bunch of reps. It isn’t so much about the team. We talk really about how the spring is about getting guys better individually, and then as we head in towards the beginning of the summer and then towards the preseason, that’s when we want to start bringing the units together and the team together and get some chemistry that way. But right now it’s really about individuals getting better.”

Obviously some of those Buckeyes will make more of their opportunities than others, and even a relatively small six-practice sample is enough for a few of them to make strong impressions.

Who is turning heads as Ohio State nears the midway point of camp? Lettermen Row is keeping its ear to the ground, and these five names have been coming up frequently for the Buckeyes so far in spring. 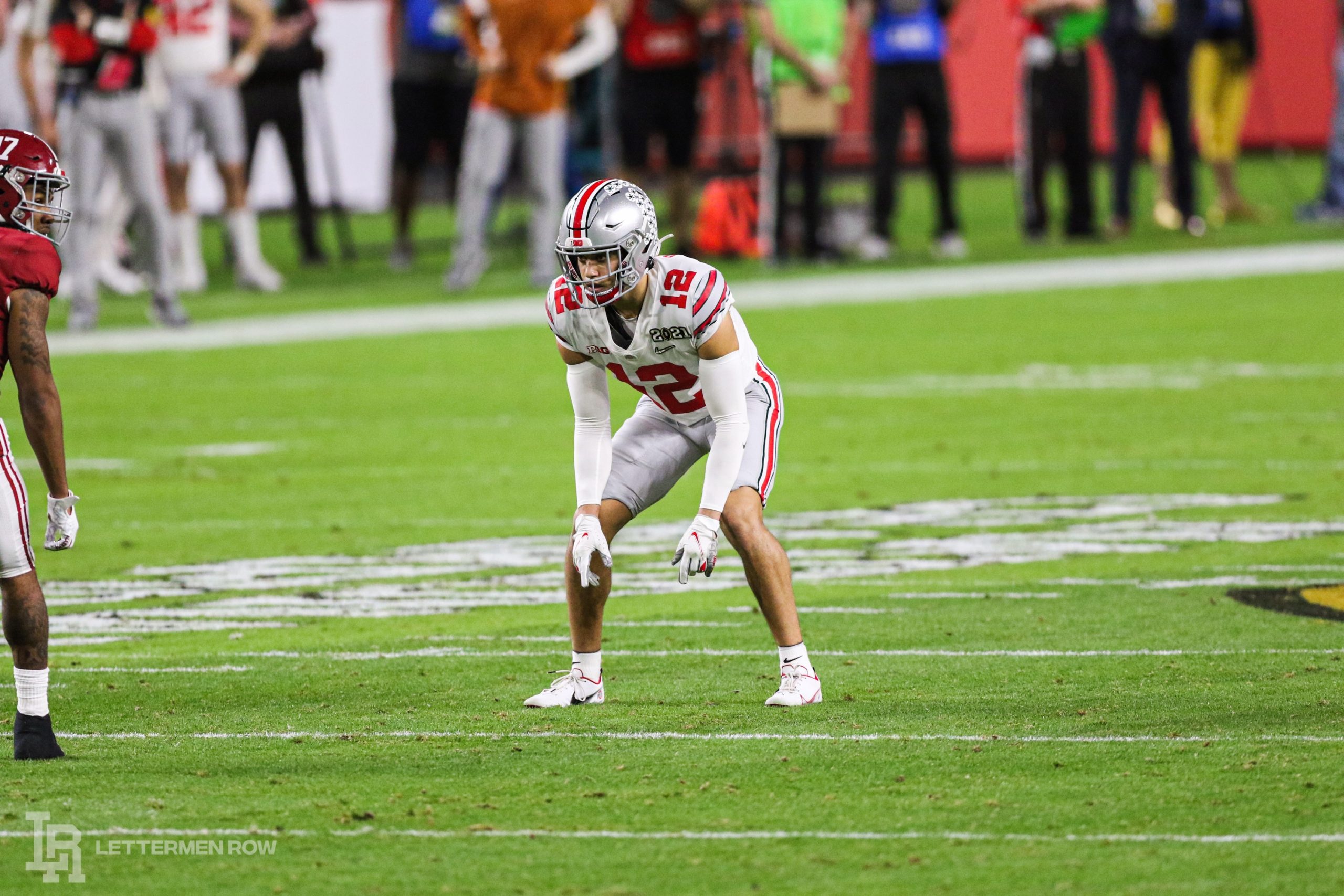 Ohio State defensive back Lathan Ransom has a chance to thrive for the Buckeyes. (Birm/Lettermen Row)

Even without being around for spring in any capacity and then going through a freshman season that left little time for development, Lathan Ransom still showed up in key moments late in the year for the Ohio State secondary. If that’s what he can do without the benefit of a normal year, imagine what the second-year safety can do for the Buckeyes now that he’s getting winter workouts, spring practices and a training camp. Ransom is looking like the top option as the cover safety in the system Kerry Coombs is fine-tuning in is second season, and the future seems incredibly bright.

The Buckeyes aren’t at full strength with the projected first-team unit on the offensive line, and position coach Greg Studrawa prefers to rotate his blockers around in the spring to get cross training and a clear idea of who fits best in every spot. So, Josh Fryar getting some looks with the starters at guard doesn’t guarantee anything at this point — but it’s certainly an encouraging sign for his growth and a reminder that he shouldn’t be overlooked in the heated competition for the interior spots. The battle will only get tougher in August, but Fryar’s early work in the spring ensures he’s going to be part of that mix.

The starting lineup requires a complete rebuild after the Buckeyes lost four seniors in the offseason. And while there is enough talent on hand to turn the project into a reload, the work got a bit more complicated with projected middle linebacker Dallas Gant out for spring with a foot injury. That opened the door just a bit wider for Tommy Eichenberg to make his move, and he’s shown quickly that he has the physical and mental tools to be a significant factor for the Buckeyes. There’s a long way to go for Ohio State at linebacker, and there’s a good chance the competition could even add another contender through the transfer portal this summer. But Eichenberg is making his presence felt so far in camp. 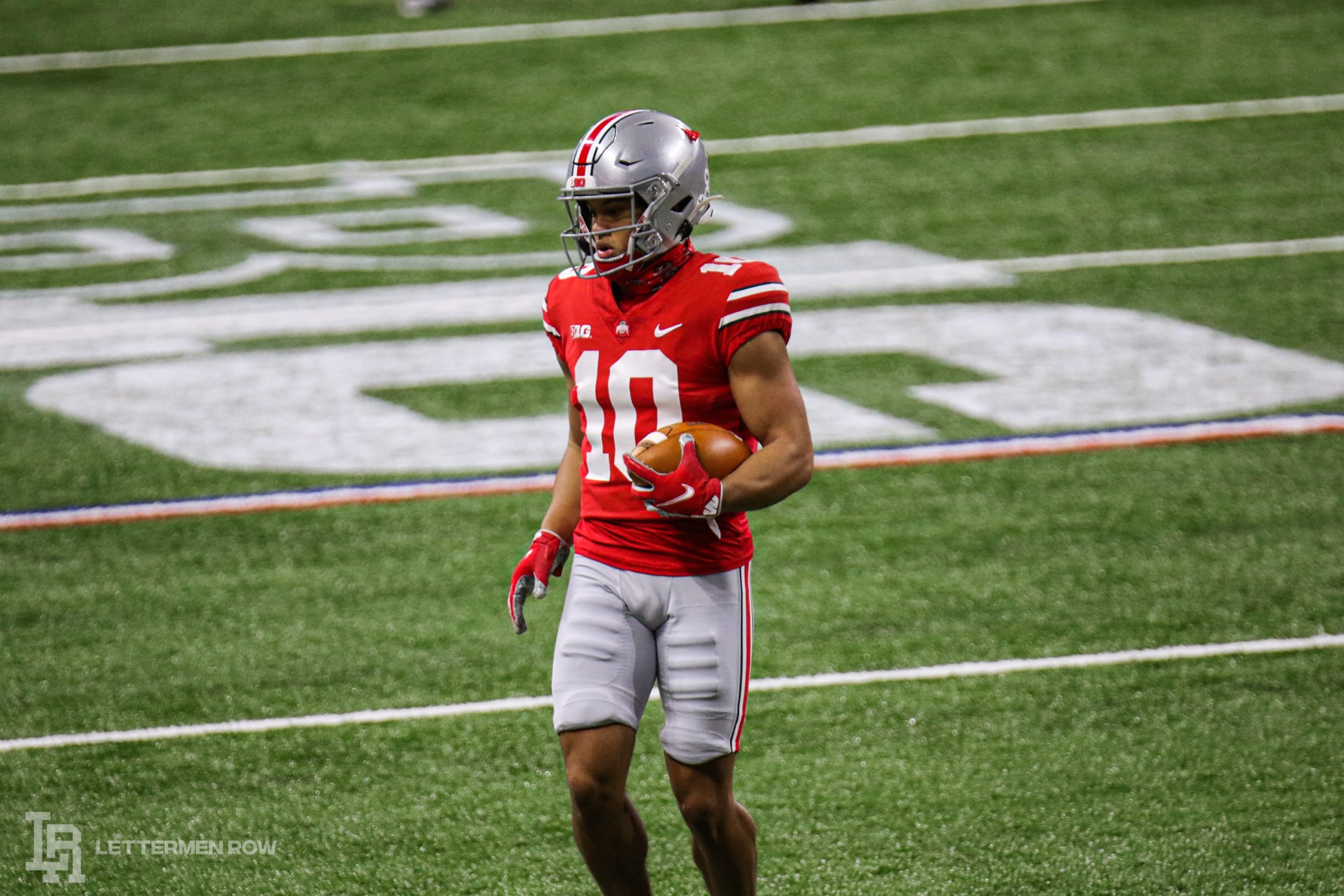 The intelligence has never been questioned, and there was ample evidence that Cameron Martinez had the athleticism to play at a championship level with Ohio State. But merging the two with more film study in his second season is helping speed up his progress so far in spring, making him a tantalizing, versatile option to help boost the secondary as it tries to recover from last season’s struggles. There was always going to be some patience required since Martinez was primarily an offensive threat in high school, and his transition was only more complicated thanks to all the schedule disruptions during his first year on campus. But Martinez seems to be zipping through the learning curve now and trying to push his way into the rotation.

Somewhat overlooked in the running-back conversation after his lengthy injury layoff, a healthy Marcus Crowley is offering reminders of why there was so much excitement about his future during a breakout freshman campaign two years ago before hurting his knee. With the way Miyan Williams was rolling late last year and the buzz around touted early enrollees TreVeyon Henderson and Evan Pryor, there is only so much spotlight to go around for Ohio State. But Crowley is going to be a factor in the race if he keeps building momentum in his comeback, and if nothing else the Buckeyes have plenty of depth at tailback.