COLUMBUS — There is a delicate balancing act for any Ohio State spring game, let alone one coming on the heels of a pandemic.

The coaching staff wants competitive situations and hates wasting workouts. The program also just had a live scrimmage last weekend and probably has almost all of the relevant information it could squeeze out of March and April.

The not-so-secret truth is that the closing exhibition in the Horseshoe isn’t the most important data point for the Buckeyes, and it often winds up simply being a celebration for the end of the camp grind. That doesn’t mean it doesn’t matter, particularly since Ryan Day is still trying to make up for lost time a year ago. But it is a reminder that most of the heavy lifting will already be done by noon on Saturday, so the Buckeyes aren’t likely to push their luck with another full-bore scrimmage.

“Iâ€™ll just leave it at this: I think a lot of guys are getting better because weâ€™re practicing,” Day said. “The one thing thatâ€™s been great is when you get to this part of spring — and we really havenâ€™t gotten to this part. What I mean by that is, weâ€™ve had some newness, weâ€™ve had some practices. But this stretch that weâ€™ve had is where you get better. Itâ€™s not the Spring Game, itâ€™s not the beginning of camp. Itâ€™s hard. Weâ€™re working through it.

“Some guys are bumped and bruised, but this is where you get better. So guys are getting better across the board.”

That progress has been evident for Ohio State, which already got what it really wanted out of camp just by seeing it through to the finish line. And even if the spring game has to be taken with a heavy dose of salt, there are still going to be Buckeyes who want to make a strong impression with fans back in attendance, a broadcast audience watching and a chance to take a bit more momentum into the offseason.

Lettermen Row will have full coverage of the event as always. And as kickoff creeps closer, here are five Buckeyes who might just wind up stealing the show. 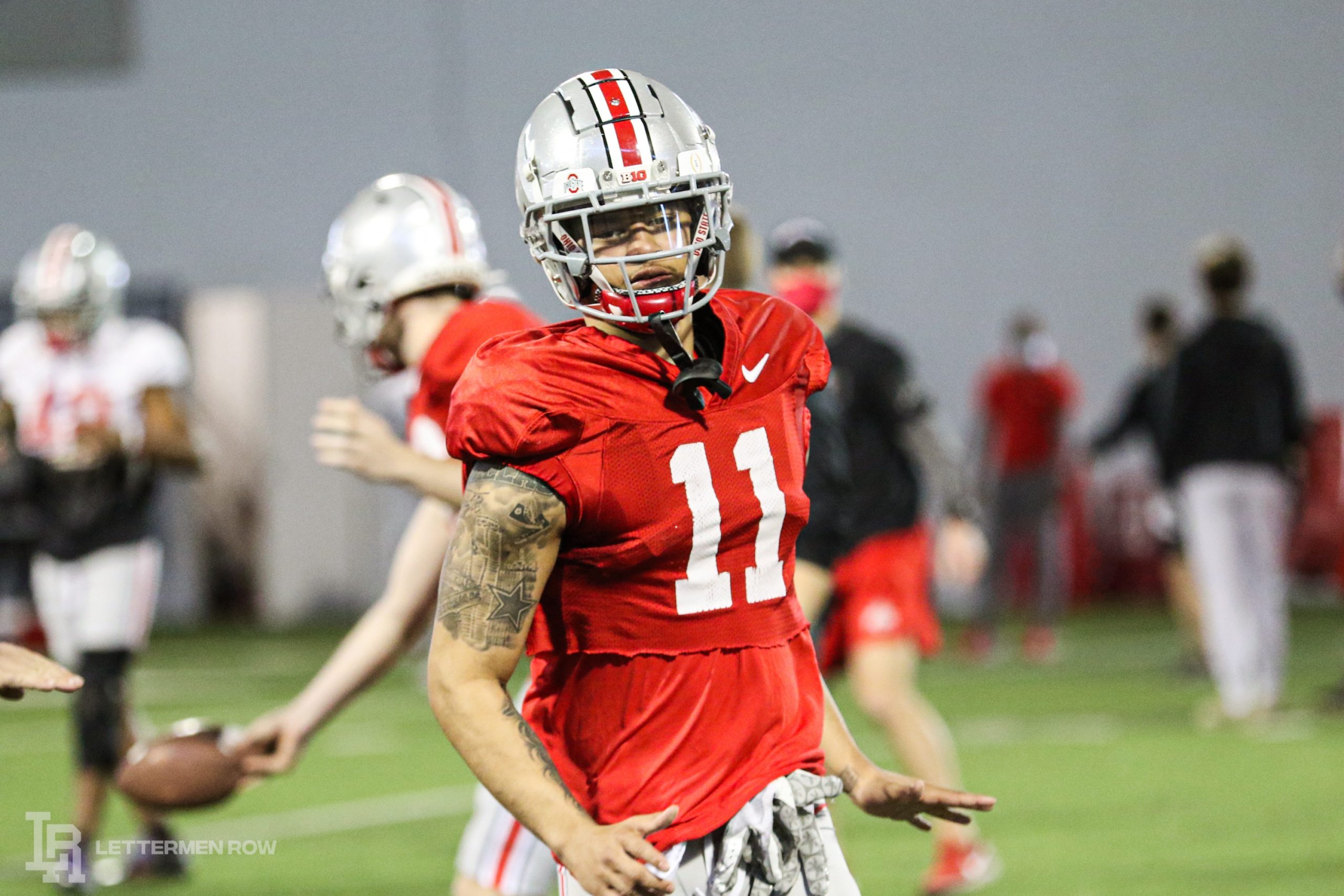 Considering the splash he made right off the bat as a freshman with one of the most eye-popping touchdown catches of the season, Jaxon Smith-Njigba doesn’t really qualify as a dark-horse pick for the spotlight on Saturday. But given a more normal offseason, the taste of experience he had last fall and what has been a terrific camp by all accounts, Smith-Njigba is apparently tapping into some immense potential. Combine his impressive route-running and strong hands with the fact that Ohio State will be throwing the football a ton (and probably don’t need to see much from Garrett Wilson and Chris Olave), and that’s a recipe for an MVP performance in the Horseshoe.

In some ways, Lathan Ransom is the defensive version of Jaxon Smith-Njigba. Even with the difficulties that came from an abnormal first year on campus, Ransom’s physical athleticism, mental approach and maturity still allowed him to make an impact even while getting on-the-job training for the Buckeyes. Heading into his sophomore year with what seems to be the inside track on a second safety/slot-corner role, Ransom has a chance to catapult into stardom for Ohio State and play a key role in the resurgence of the secondary. There will be no shortage of opportunities to defend the pass on Saturday, and Ransom might erase some concerns about the defensive backs with a couple big plays. 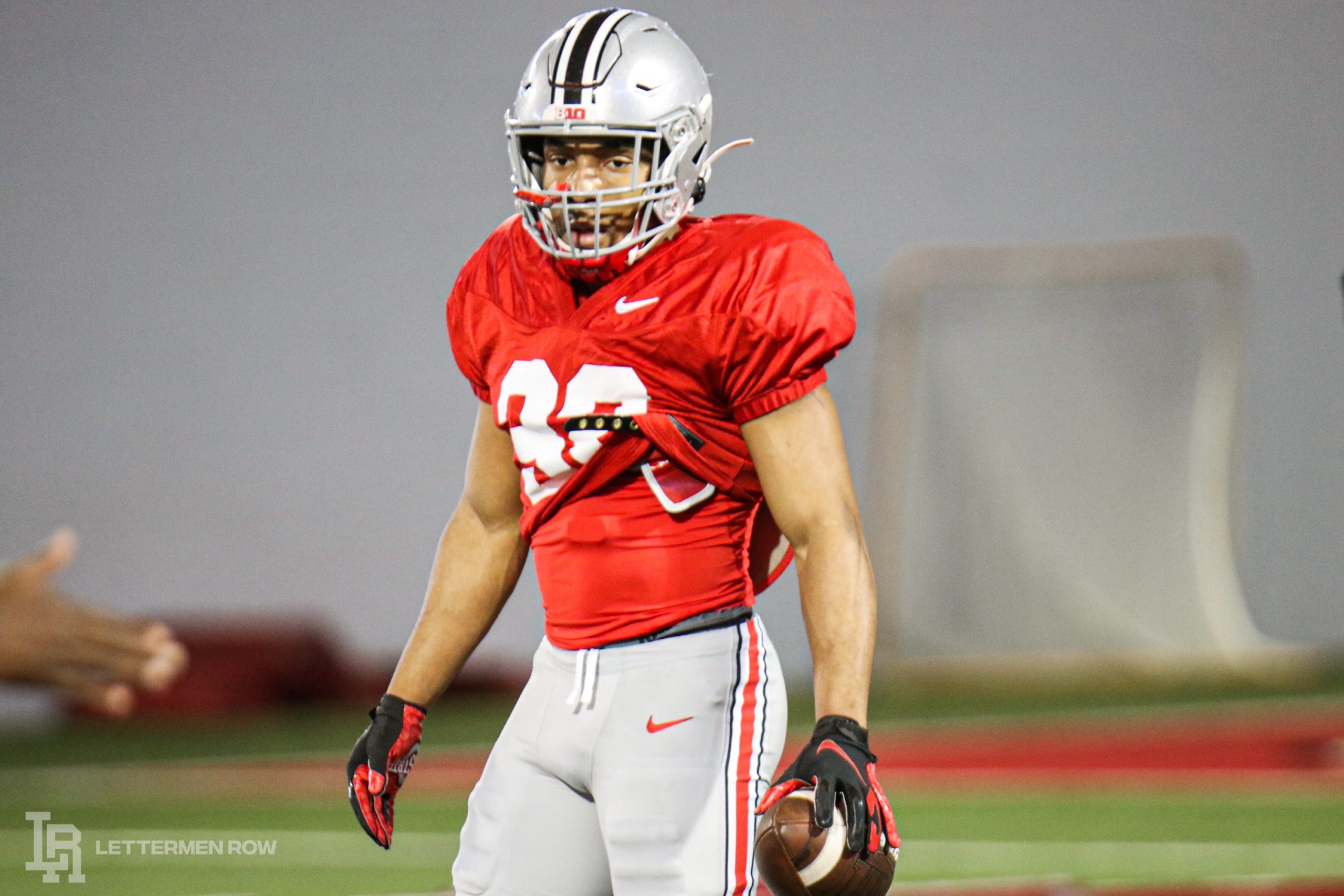 Ohio State hadn’t nailed down all the details about the scrimmage format earlier in the week, though it’s unlikely there will be any live tackling or much need to run the football much. The Buckeyes will still have to mix in some work on the ground and will surely involve the tailbacks in the passing attack, and that could be a prime chance for TreVeyon Henderson to show the world his freakish athleticism. Henderson has more than lived up to his five-star billing in camp so far, and the removal of his black stripe in spring is a clear signal that Ohio State has seen instant-impact ability in him. The running-back race is deep and competitive, but Henderson’s first outing in the Horseshoe will probably turn a few heads.

When the Buckeyes are fully healthy, there is really not much uncertainty at the top of the depth chart: Sevyn Banks and Cameron Brown will lead the way for Ohio State at cornerback. But it can definitely get more interesting from there for the Buckeyes, and the fact that a talented young guy like Ryan Watts was able to take a few extra reps this spring could pay off in a big way down the road. The rangy sophomore isn’t a finished product by any stretch of the imagination, and going against guys like Garrett Wilson or Chris Olave can occasionally make any defensive back look silly. But Watts has the competitiveness to battle through that and use those experiences to get better, and he could leave spring with a bit of momentum by getting his hands on the football in front of a crowd.

Ohio State is going to air it out in the scrimmage, that’s a safe bet. It also doesn’t need to see much from the returning veterans, including star tight end Jeremy Ruckert. So, that equation could produce big numbers for Cade Stover as he gets more comfortable at tight end and stakes his claim as the complementary option at a position the Buckeyes feature heavily — even when they aren’t throwing it to them much when it counts. Every year there is a conversation about getting more targets for the tight ends, and it rarely materializes for the Buckeyes. But if anybody could change that, it’s guys with the elite skills of Ruckert and versatility of Stover. Expect to see a glimpse of what Stover could provide on Saturday.