COLUMBUS — Ohio State needed somebody to bridge the eras at running back.

Turns out, Trey Sermon was another record-breaking rusher himself. So even with just one pandemic-shortened season, the bar in the Buckeyes backfield continued to be raised with Sermon’s postseason tear only adding to the program’s rich tradition at the position.

The program knew all along his stay would be brief, and it was designed to smooth the transition after J.K. Dobbins moved on early to the NFL Draft. So, this spring was always setting up to be a cutthroat competition as Ohio State stockpiled talent, and that’s exactly what’s on tap in a couple weeks when practice resumes in the Woody Hayes Athletic Center.

“A lot of depth, a lot of guys, certainly a lot of talent,” Buckeyes coach Ryan Day said. “What a great opportunity this spring to have these guys go compete. Weâ€™re going to try to do the best we can to simulate games this spring to get a feel for where these guys are at. Master [Teague] comes back, which is great. He brings some experience to the table. Marcus Crowley is now coming off that ACL, so now we get to see the best version of him. Miyan [Williams] really popped this year, showed some great things. Steele [Chambers] is going to get an opportunity to compete, and then you have two young guys. I know that they are coming in here to play.

“A lot of depth there, but an opportunity for those guys to come in and compete. Itâ€™s going to be exciting to watch.”

There’s pressure to get the decision right, too. But the truth is the Buckeyes probably don’t have any wrong answers based on just how loaded that unit is as running backs coach Tony Alford looks to reload yet again. How will the battle play out in March and April? Lettermen Row is continuing the Spring Forecast with a closer look at the tailbacks. 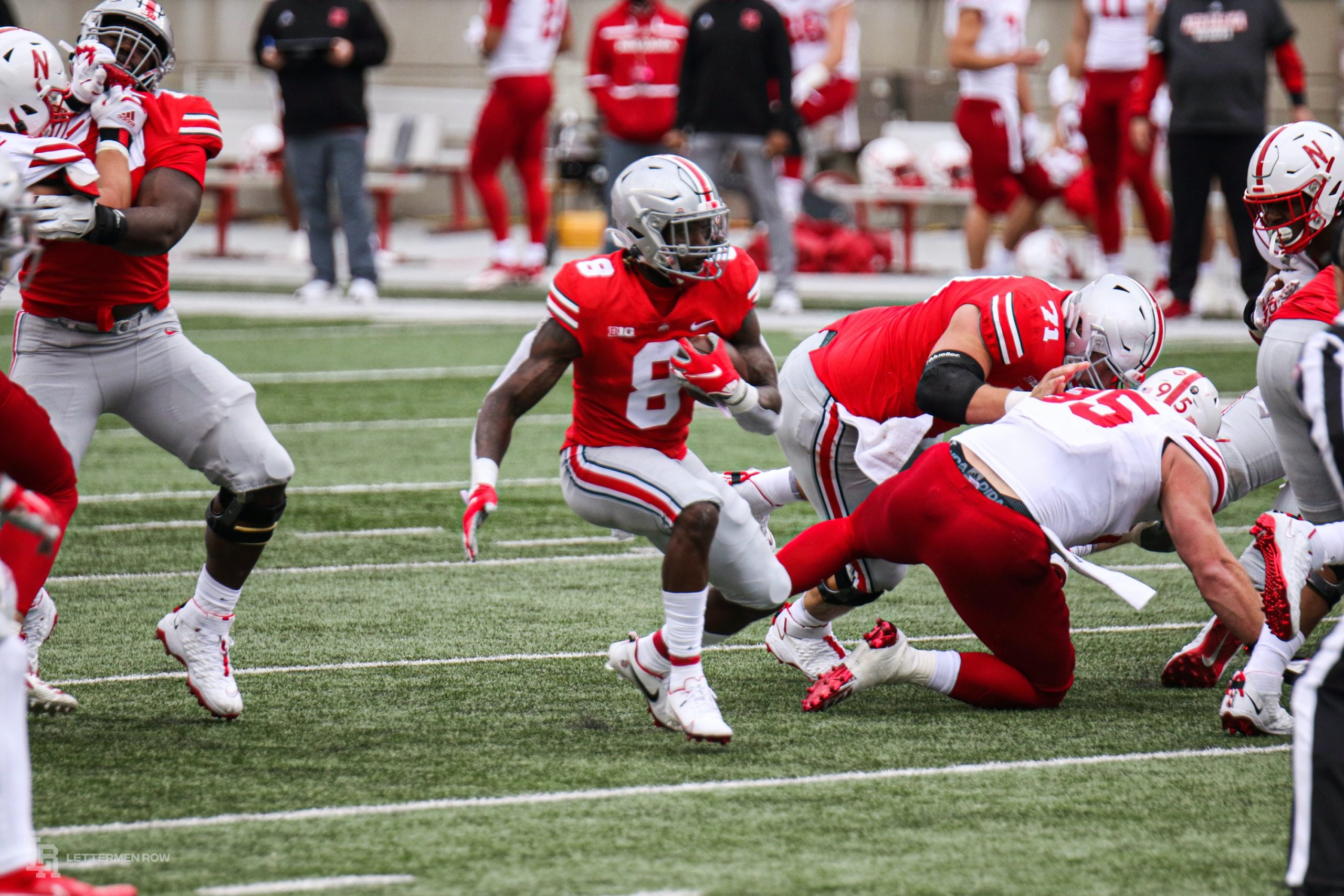 The Stakes: Ohio State must replace record-setting running back

The flames seemed to be flickering early in the season, and there were plenty of questions even within the program about whether Trey Sermon would be able to keep the torch lit for the running backs. But by the end of the season, Sermon had etched his name in the Ohio State record books with a performance for the ages in the Big Ten title game, followed that up with another productive outing in the Sugar Bowl — and then had his value highlighted a different way after being knocked out with an injury on the first drive of the title game. Thanks to the free year of eligibility, Sermon could have returned to the Buckeyes for another season, but both parties got everything they could have asked for out of the temporary partnership as the deck is cleared for a deep, versatile group this spring.

Ohio State has a veteran with a proven nose for the end zone returning to provide leadership, and Master Teague’s 13 career rushing touchdowns are a fine foundation for the unit. But the Buckeyes have likely seen the ceiling with his physical, straight-ahead style, and Teague is going to have his hands full trying to hold off the next wave of tailbacks.

Miyan Williams bullied his way to the front of that line late in his freshman season before missing the championship game due to COVID-19, and the aggression he packs into a relatively undersized frame has proven to be a dangerous combination for defenders trying to tackle the bowling ball. Marcus Crowley was making a similar freshman surge two seasons ago before a knee injury knocked him out for more than a year, but Ohio State has long been high on his potential when fully healthy. Then throw in five-star phenom TreVeyon Henderson and do-it-all, four-star prospect Evan Pryor and the competition gets even more heated.

The Forecast: Battle will narrow, carry over into training camp

Tony Alford never locks himself into one system, and he certainly doesn’t make predictions in March about how Ohio State will use its talented stable of tailbacks. If one superstar emerges, the Buckeyes will roll with him like they did Dobbins two years ago and with Sermon late in the year. If a rotation is the best way forward, Alford has experience managing both carries on the field and egos in the meeting room to make sure everybody is on the same page. So, there’s not likely to be an answer on the depth chart or the workload until August at the earliest — but it’s possible that the focus could narrow by the end of April, particularly if somebody like Steele Chambers looks like he might offer more help at a different position.

All eyes will be on Henderson early to see if he can make the kind of instant impact that J.K. Dobbins did a few years ago. But the Buckeyes also aren’t in a position where that’s a necessity thanks to all the other talent assembled at running back.