COLUMBUS — The first phase of spring camp at Ohio State is complete.

The Buckeyes needed just two days of work to get through the acclimation period before taking a little hiatus, setting the stage for them to push the pedal down after spring break next week.

The most curious observer for that second workout? Former Ohio State coach Urban Meyer took in the Friday-morning workout from the sideline, checking in on the progress the program is already making in camp with Ryan Day.

What all was there to learn about the Buckeyes? Meyer’s eye is obviously much more keen, but here’s what Lettermen Row took away from practice No. 2.

After some shaky moments early on during the first practice of camp, there was already noticeable improvement in the accuracy, arm strength and confidence in the quarterbacks. Matthew Baldwin, in particular, looked dialed in during the portions of practice that were open to the media, making it clear that he’s not just going to let Justin Fields be handed the starting job. The redshirt freshman from Texas was much sharper, consistently putting the ball on the money, uncorking a few impressive deep balls and appearing more comfortable in the drills against defense. There is obviously a long way to go for the Buckeyes before making a decision at the most important position on the field, but Baldwin showed some glimpses at why Day went down to the Lone Star State to recruit him. 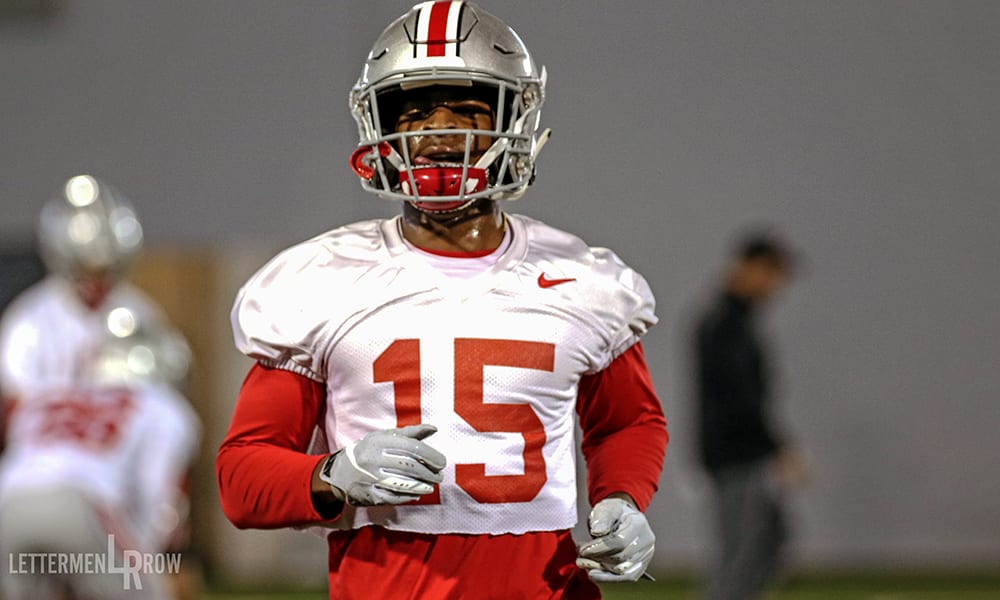 Ohio State safety Josh Proctor is making an early move thanks to his athleticism. (Birm/Lettermen Row)

Josh Proctor is on the rise

Fitting all the pieces together is going to take some time for the Ohio State defense, particularly in the secondary where there is as much talent as there is positional flexibility. But one way or another, Josh Proctor is already pushing to be included in those plans with his undeniable athleticism already showing early in camp. The Oklahoma native wasn’t able to make an impact as a true freshman despite the issues at safety, but he’s not the first defensive back who needed a year to transition to the college level before potentially making a leap. With Jordan Fuller out for spring, Proctor is getting some extra first-team reps that he might not have otherwise. And with Brendon White maybe sliding into more of a hybrid role, that might also open up a spot for Proctor to carve out a consistent role.

Austin Mack appears back to full strength for Buckeyes

His junior season certainly didn’t go the way he envisioned, with Austin Mack dealing with issues catching the football early in big games and then going down with an injury in October that ended his year. But Mack is showing no signs of being limited on his surgically-repaired foot, and he turned in a handful of eye-catching receptions that suggest he’s back on track and ready to unleash his potential as one of the team’s best targets. There will be competition again for catches with Zone 6 again loaded with depth, talent and experience, but Mack might be one of the most important pieces moving forward for the passing attack.

The Buckeyes have always raved about the work ethic, route running and steady hands of C.J. Saunders, but the logjam of talent at wide receiver has made it tough for the former walk-on to find a consistent role. Ohio State is clearly trying to find a way to use him, though, especially because he continues to make defensive backs look silly during one-on-one routes. The best option might be as a punt returner, and Saunders lined up there to field punts on Friday morning. There are plenty of other guys with higher profiles at wideout, but Saunders can be a real asset for the Buckeyes.

Videos from all of the Buckeyes quarterback and passing game coordinator Mike Yurcich can be seen below or by heading to the Lettermen Row Youtube channel.