COLUMBUS — After more than a year of being on the outside â€“ due to the pandemic precautions and protocols — and not being allowed to look in, the media was allowed back in to an Ohio State football spring practice Friday morning.

Ryan Day and his coaches were putting this year’s team through its seventh workout of an allowed 15 that includes the spring game on April 17. Spirits seemed high among the Buckeyes, just under three months removed from their College Football Playoff championship game loss to Alabama. The media was allowed 25 minutes of look-see before being ushered out — and honestly, 12 to 13 minutes of that was during the stretching exercises that precede the real stuff.

But beggars canâ€™t be choosers, especially since the media window was yet another sign that things appear to be on the downhill side of a slide back toward normalcy from the high point of the constraints of the pandemic. Plus, even in that less half hour, there were some things to note. Here are five observations from the Lettermen Row vantage point. 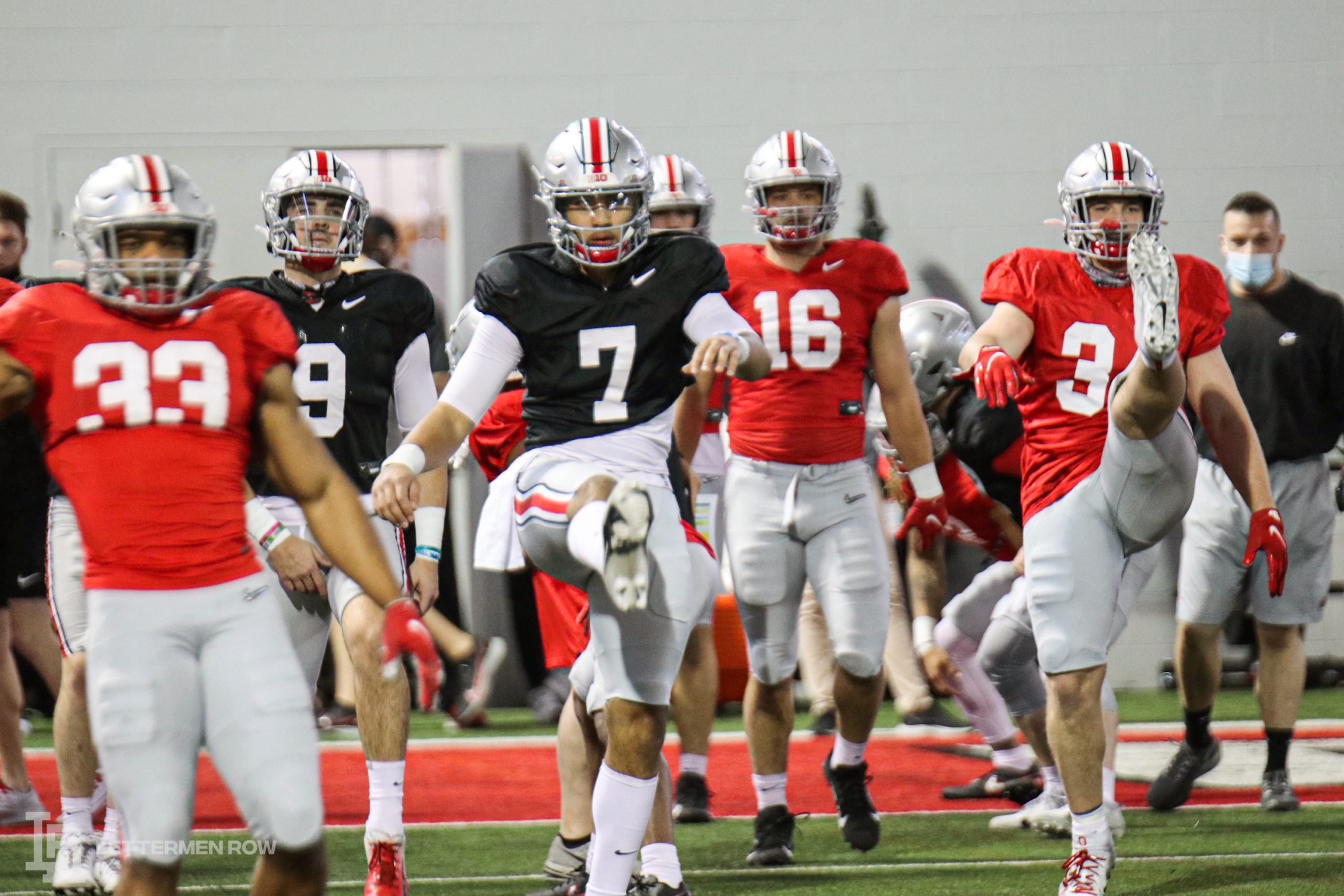 There was no surprise at the pecking order of quarterback reps as they compete to replace the departed Justin Fields. C.J. Stroud was followed by fellow class of â€™20 signee Jack Miller III, not only as they went through the pre-practice stretches and runs, but also in the handoff, pitchout and passing drills that followed. Third in line was true freshman Kyle McCord. In the brief passing drills, all looked on point with their throws. And in the option drills, all three looked quite nimble on their feet. Day has said the competition is likely to go into preseason camp in August and perhaps into the season, but itâ€™s funny that halfway through drills the three took turns in the order that was expected.

Senior receiver Chris Olave was not taking part in drills, at least as long as the media was there. But insiders said his absence was not believed to be because of anything serious and coach Ryan Day indicated there was a non-COVID illness going around the team. Olave surprised many by opting to return for his senior season, and along with current Ohio State receivers Garrett Wilson and Jameson Williams, he caught passes from Fields during the Pro Day on Tuesday in front of NFL coaches, administrators and scouts. Meanwhile, as Lettermen Row reported earlier this week, cornerback Sevyn Banks will miss the rest of spring due to an undisclosed injury, believed to have been suffered Wednesday. He joined several other upper-level players who already were sitting out the spring as they continue to recover from offseason surgeries or from ailments from last season, including center Harry Miller, defensive tackle Haskell Garrett and cornerback Cam Brown.

From defensive end Zach Harrison to quarterbacks Stroud and Miller, to running back Master Teague III, the impact on their bodies, in a positive way, from a year or two under the guidance of football performance coordinator Mickey Marotti is striking. The poster man for it on this edition of the Buckeyes, though, might turn out to be offensive lineman Dawand Jones. He has trimmed down to the point of almost looking like a big man for a basketball team. Jones, who stepped in and played well in emergency starts last year at tackle as the team dealt with the pandemic, could be in competition for one of the guard spots this spring, as is fellow backup tackle and former five-star prospect Paris Johnson Jr. 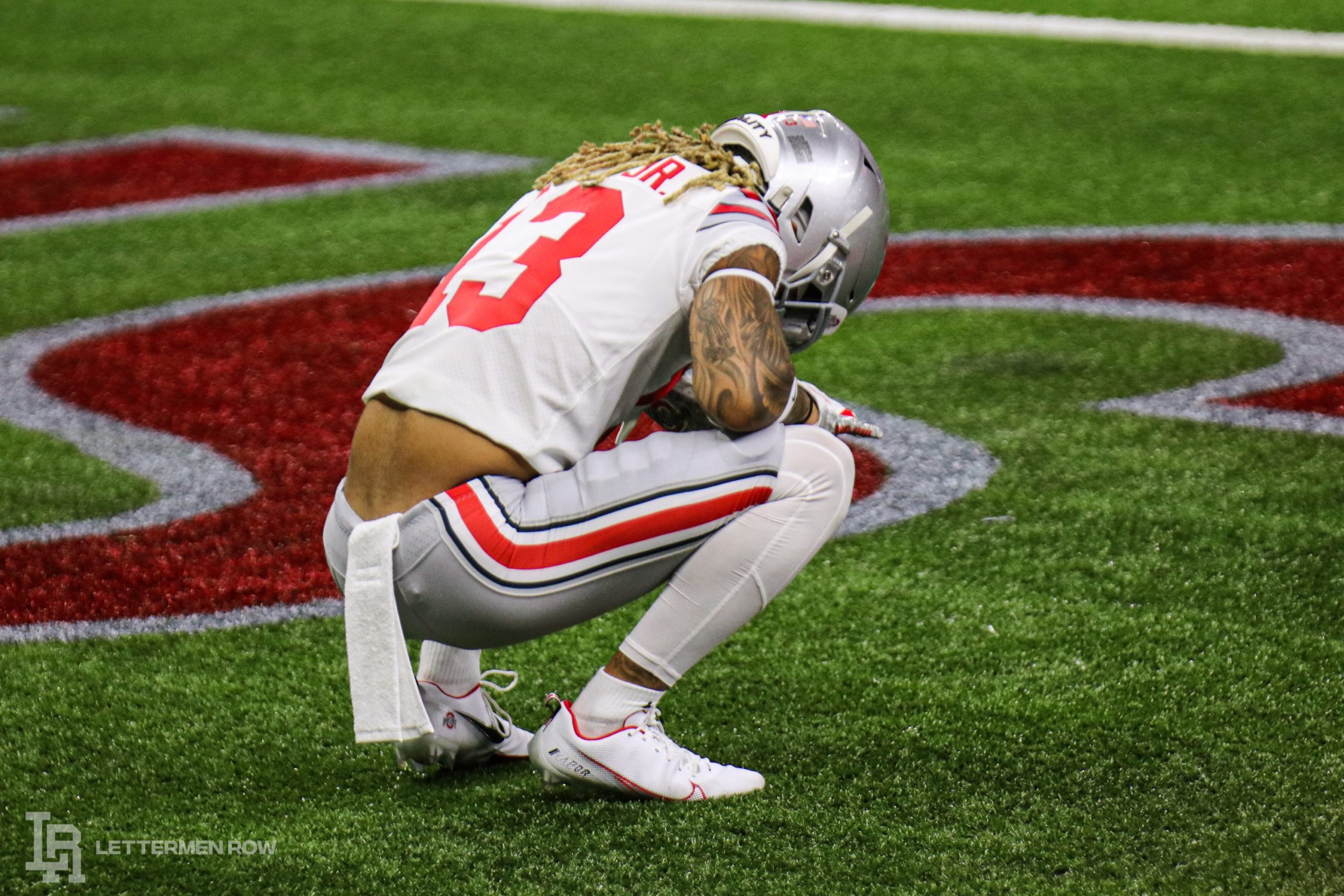 Demario McCall has been a running back, an H-back and return man during his previous several years at Ohio State. Now comes slot corner? Yes, he was working in that position on Friday morning. And Gee Scott, one of the fabulous four receivers who signed in â€™20, was working at tight end on Friday. Day said the spring is a time for experimentation, and those certainly fit that category.

Buckeyes zipping around with urgency

That the football drills portion of the practice had a definite upbeat tempo was no surprise, but at points what looked new to view was an enhanced version of that. During a passing portion, for example, the quarterbacks were rolling in within five seconds of each other to fire off throws to the revolving line of receivers. And the defensive backs took part in one particular drill two at a time, getting in two reps in a span of time in which they would have gotten just one.