A native of La Grange, Texas, the tiny Lone Star State community tucked along Highway 71 some 90 miles from Houston and 60 miles from Austin, Dobbins had an altogether different determination when he returned from Christmas Break in January 2015.

â€œFor J.K., it was about wanting to play for national championships,â€ Matt Kates, Dobbinsâ€™ prep coach at La Grange High School, told LettermenRow.com. â€œHis sophomore year was the first year of the College Football Playoff, and them getting in and winning it had a huge impact on him

â€œHe came in that January after Christmas Break, and said, â€˜I want to play in those types of games.â€™ I donâ€™t get to tell that to many kids, one of only about three or four, that if thatâ€™s what youâ€™re working for, youâ€™ve got a chance.â€

Dobbins is one of seven native Texans on the roster as No. 4 Ohio State heads to AT&T Stadium to take on No. 15 TCU Saturday in an intersectional clash with playoff ramifications. The Lone Star Seven, consisting of Dobbins, Demetrius Knox, Ellijah Gardiner, Kendall Sheffield, Baron Browning, Jeffrey Okudah and Matthew Baldwin, own a combined 93 career games of experience. 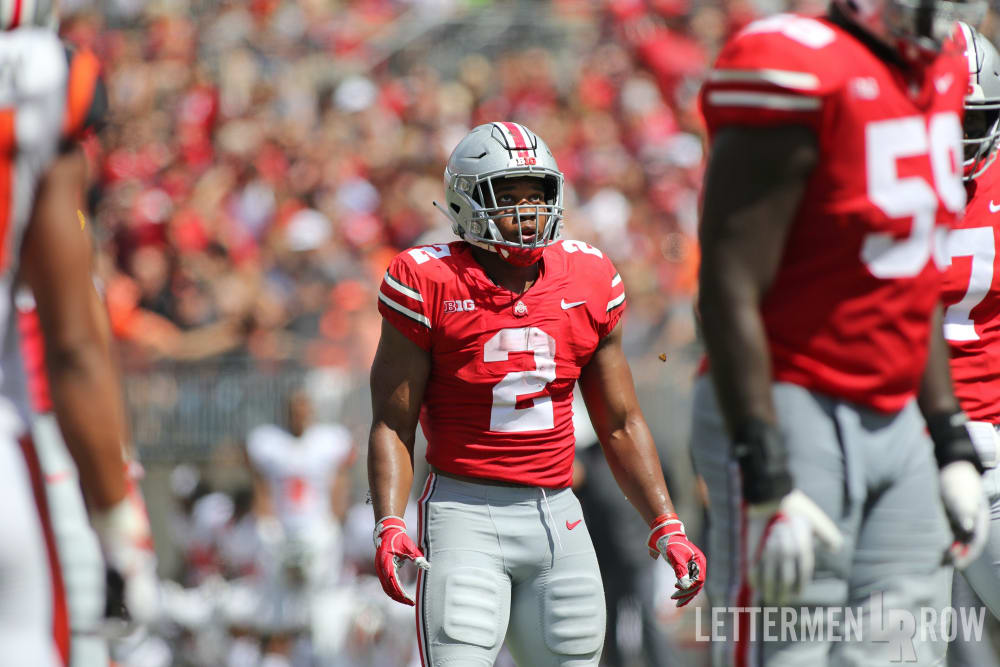 â€œIt wasnâ€™t just Ohio State, it was [J.K. said], â€˜I want to play in those types of games,â€™â€ said Kates. â€œI told him Ohio State is one of three or four places where you can have that chance just about every year.

â€œTCU was his first offer as a young kid, and they did a heck of a job recruiting him the whole time. After his sophomore year, thatâ€™s kind of when people really started seeing film and what he was all about it. Iâ€™m from the Metroplex, and if he was playing at a 6A in the Metroplex, heâ€™d have been a five-star after his junior year if not after his sophomore year. â€¦ We saw a lot of people from a lot of places, but Ohio State did a great job recruiting him. J.K. even committed before being there in person.â€

Twenty years ago, maybe even just 10 or 15, it would have been unheard of for a player to choose his school without a firsthand look. Now? The trio of Texas high school coaches in this story point not only to Ohio Stateâ€™s national brand, but also the depth of information in hand.

â€œWith TV and social media, all things that are present now that were not 8, 10, 15 years ago, they can go to their website or Twitter and can see whatâ€™s going on at Ohio State,â€ said Richard Barrett, Browningâ€™s coach at Kennedale. â€œAnd I think another thing Baron had working in his experience, his dad played at TCU and his brother at Stanford. When youâ€™ve got somebody thatâ€™s been through that, done that and experienced recruiting, taken visits and done all those kinds of things, they were able to lend their expertise and knowledge. And when it came down to it, Ohio State was the choice.â€

â€œNot just social media, but the way we live today for sure,â€ Kates said. â€œYou can get on the Internet and look at pictures and every darn thing else you would possibly want to see or know about Ohio State or anywhere.â€

Added Okudahâ€™s coach, South Grand Prairieâ€™s Brent Whitson, â€œI think you can take it one step further: Theyâ€™re not just on TV, theyâ€™re on their phone, highlight of the week on Twitter, either somebody not related to the program or the program. Itâ€™s just so accessible to the kids; Columbus, Ohio, is not just some intangible anymore. When you go to take a visit somewhere, it is not quite as scary as say 20 years ago.â€

That, in turn, Whitson explained, allows parents the potential to make a more pragmatic evaluation of college options during the recruiting process. Â

â€œI think parents are a little more at ease because itâ€™s not quite as much a mystery,â€ Whitson said. â€œThereâ€™s a whole different level of willingness on these parentsâ€™ part to go do a 10-day trip through the Midwest, hit five or six schools. Weâ€™ve got a kid [Myles Jernigan] who just committed to Cal-Berkeley. They just made that trip and visited a couple different schools. That was really unheard of even a decade ago because everybody waited until they took their five officials and on somebody elseâ€™s dime.â€ 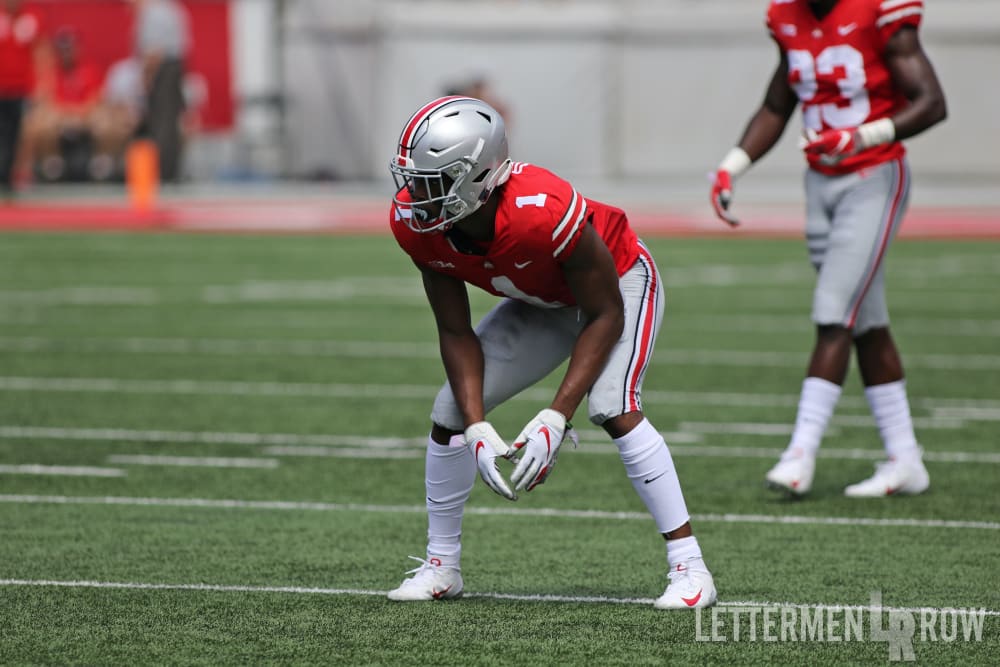 College rosters nationwide are dotted with out-of-state players; that part is nothing new. The Buckeyesâ€™ national brand, however, coupled with their prodigious success since Meyer took over the program in 2012 has seen them strike a veritable Texas pipeline.

In the decade before Meyerâ€™s arrival, Ohio State signed a grand total of three Texans; since 2013, his program has added 10 natives, Texas junior-college product Antwuan Jackson and it currently has a commitment from consensus 2019 five-star prospect Garrett Wilson of Austinâ€™s Lake Travis High School. Â

â€œI think their reputation preceded them as far as having guys at my position like Gareon [Conley] and Marshon [Lattimore], Eli [Apple], [Bradley] Roby,â€ Okudah said. â€œFor J.K., obviously you have Zeke [Elliott] and the history of great running backs. For Baron, you have [Ryan] Shazier, [Raekwon] McMillan and Darron Lee and all that. So, when you see that being in Texas, itâ€™s appealing to be one of those next guys in line.

â€œI was definitely happy with [having other Texans on the roster last year], just because you donâ€™t have to worry about getting homesick. You kind of feel like you brought part of home with you to Ohio.â€

â€œCoach Meyer sells Ohio State University and all the things that go along with it,â€ Barrett said. â€œThe things you gain from four to five years there; youâ€™ll be connected for life with a lot of opportunities and employment, things like that. They have a national presence. Kids see that and understand that.

â€œCoach Meyer does good a job selling that, along with his assistants and recruiters. When you take all that into consideration, Ohio State football is pretty darn good.â€ 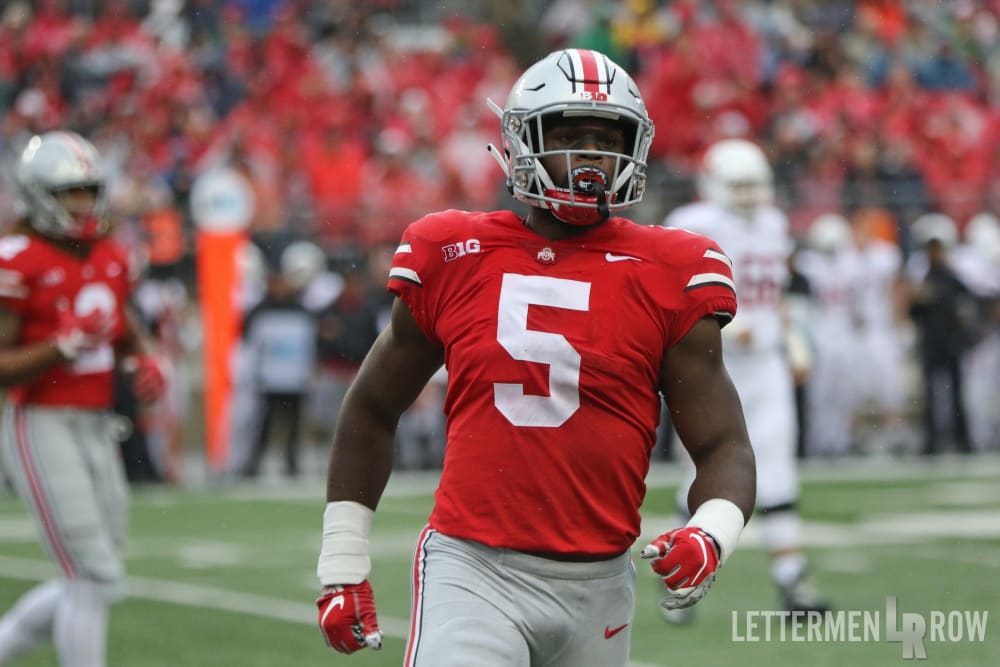 Baron Browning is carving out a consistent role as a sophomore linebacker for Ohio State. (Birm/Lettermen Row)

Indeed, Meyerâ€™s staff boasts plenty of Texas knowledge and the high school coaches notice its composition. Assistant head coach for offense Tony Alford was heralded by Kates as a key in Dobbinsâ€™ recruitment, while co-defensive coordinator Alex Grinch has recruiting knowledge from previous stints at both Missouri and Wyoming. Cornerbacks coach Taver Johnson recruited Texas while on staff at Arkansas and Greg Studwara likewise dipped into the Lone Star State when on staff at LSU. Kevin Wilsonâ€™s ties run deep from his tenure at Oklahoma.

Collectively, Meyer and his current and former assistants all worked to plant flags all over Texas.

Buckeye Leaves won’t be replacing that Lone Star any time soon, but the Ohio State presence inside those borders doesn’t appear to be going away — and will be on prominent display when Dobbins and Co. return on a business trip this weekend.