The speculation, debate and conversations about Ohio State never end, and Lettermen Row is always ready to dive into the discussions. All week long, senior writer Austin Ward will field topics about the Buckeyes submitted by readers and break down anything that’s on the minds of the Best Damn Fans in the Land. Have a question that needs to be tackled, like the one today about the sales pitch for future Buckeyes up front as part of Tight Ends Week? Send it in right here — and check back daily for the answers.

Will @OhioStateFB actually throw the ball to the TE's on a regular basis?

The annual vows that Ohio State is going to throw to the tight ends more, deploy more sets with two of them on the field and provide more opportunities to get those guys involved in the attack have already been made for this season. And considering that man-for-man that unit might be one of the most solid on the roster for the Buckeyes, there is a good reason to believe that will be the case.

But the truth is the program is already putting those versatile athletes to good use, even if statistically it might not always seem that way.

The first hurdle is putting the numbers in a little different perspective. If Luke Farrell, Rashod Berry and Jeremy Ruckert were simply combined into one contributor, the production line of 30 catches for 296 with three touchdowns would look pretty decent. It’s not a perfect comparison, but that’s not all that different than how Michigan used top tight end Zach Gentry last season when he finished with 32 receptions for 514 yards with two scores and finished as an All-Big Ten pick. 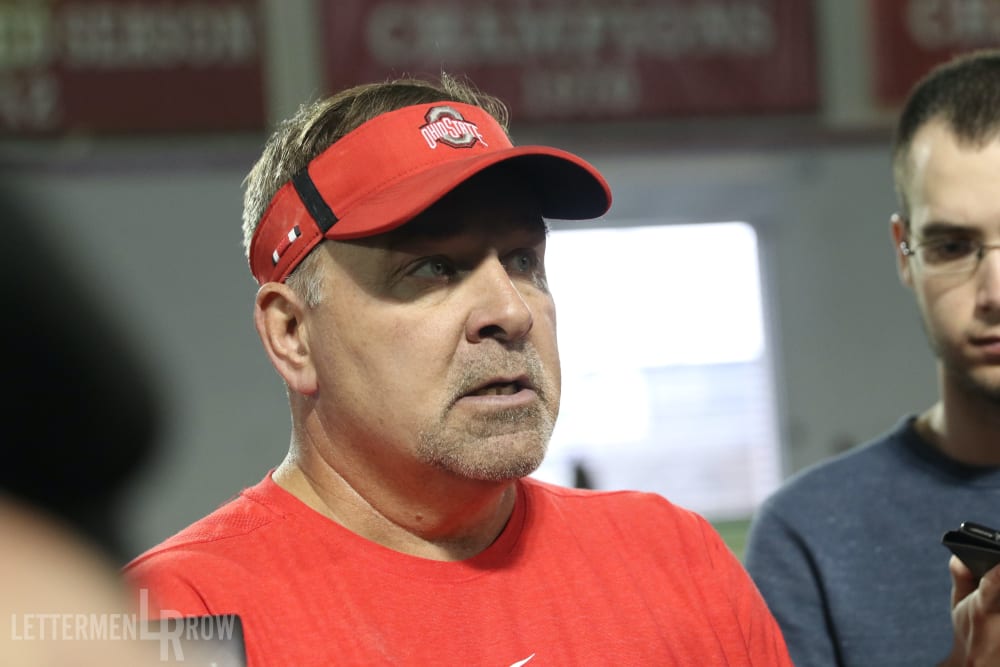 Ohio State tight ends coach Kevin Wilson knows how to unleash the potential of that unit for the Buckeyes. (Birm/Lettermen Row)

One key difference between the Buckeyes and Wolverines on offense? Ohio State had an overflowing cupboard of talent at the skill positions, and it doesn’t make a whole lot of sense to purposefully take away touches from game-breaking weapons like Parris Campbell or Terry McLaurin just to get the tight ends involved. Co-offensive coordinator and tight ends coach Kevin Wilson certainly wants his players rewarded with touches at times, and he’s turned some guys at that position into consistent threats previously in his career. But he’s also acknowledged that on the order of priorities for the Ohio State offense, Farrell or Ruckert or Berry aren’t going to leap ahead of the dynamic weapons at wide receiver, H-back or in the backfield.

There is only one football and a limited number of opportunities to go around. And considering that there has been more clamoring to give tailback J.K. Dobbins a heavier workload, the potential for Justin Fields to carry the football at quarterback and another loaded, six-man arsenal at wideout, it’s hard to see how Ohio State would carve out many more chances at tight end.

It’s also a challenge to figure out why they even would need to, since the Buckeyes were already far and away the most prolific offense in the Big Ten last season.

The Buckeyes are already getting valuable work out of their tight ends. Yes, it most often requires blocking for others and doesn’t show up in the box score. But Ohio State isn’t actively trying to avoid throwing to the tight ends as much as it simply takes what the defenses give it while also emphasizing the athletes who give it the best chance to win games.

The tight ends are absolutely part of that equation, which is why some combination of Farrell, Berry and Ruckert will be on the field so often this season. Maybe individually they won’t post eye-popping statistics, but the unit as a whole is almost a lock to get the job done for Ohio State.