COLUMBUS — Larry Johnson could barely hide the smile on his face after finishing up another spring practice at Ohio State.

Is the veteran defensive line coach worried about finding a way to use all that ridiculous depth the program has stockpiled for the Rushmen?

“You can never have too many,” Johnson said. “I mean, you’re one play down and the next guy is up. I’ve never felt that we could have too many, and we’ve got a plan to play all those guys. 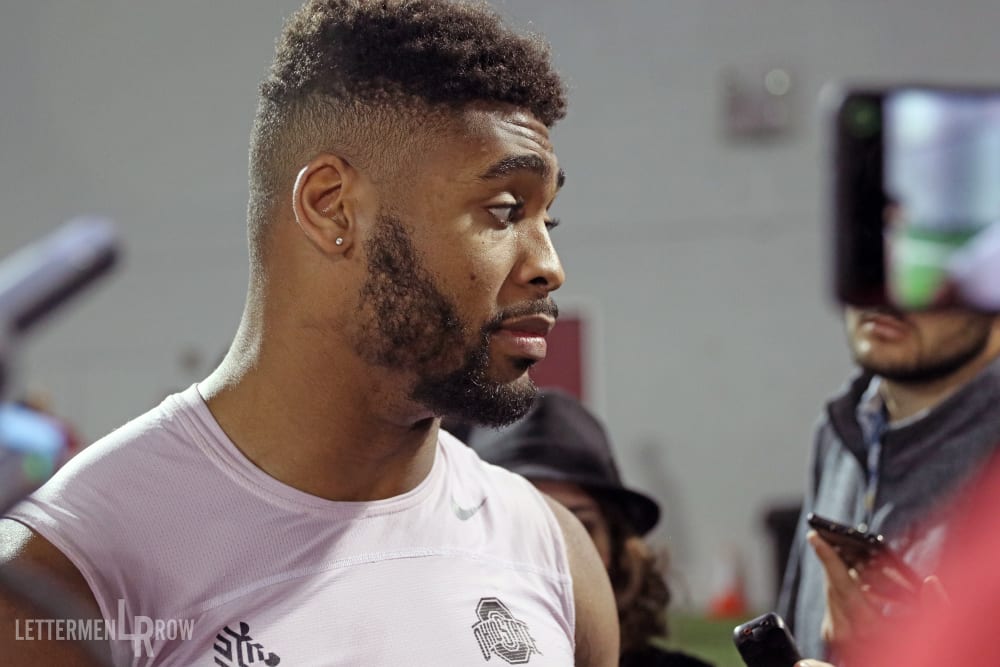 With a veteran like Jonathon Cooper leading the way, Ohio State has plenty to work with on the defensive line again. (Birm/Lettermen Row)

Clearly that’s an expected position of strength for the Buckeyes given Johnson’s legendary stature and his year-after-year success on the recruiting trail. But he was joined after practice on Friday be a less-heralded position group that suddenly appears to have the same level of relative depth, flexibility and talent: Ohio State’s tight ends.

The overall numbers at tight end are obviously smaller, but between Luke Farrell, Rashod Berry, Jeremy Ruckert and potentially Jake Hausmann when he’s healthy, the Buckeyes have a similar freedom to get creative and an ability to spread around snaps.

“[Farrell] is a very good player, he’s more talented than people think,” Ohio State tight ends coach Kevin Wilson said. “I think Rashod is our strongest and most dynamic player. And then Ruckert has the most upside. Jake, I guess he had a slight little tweak, but he’s been doing well.

“So, with those four guys, we’re playing them.”

How will both units deploy all of that impressive personnel? What’s the expectation for both groups this season? Here’s what Lettermen Row learned from those Buckeyes chatting with the media on Friday.

Chase Young ready to lead the way for Ohio State

Maybe mentally Chase Young wasn’t quite ready to be the primary pass-rushing threat when Nick Bosa went down with an injury, but he definitely wasn’t prepared physically after picking up issues in both ankles in the first month of the season. By the end of his sophomore campaign, Young was starting to flash the dominance that has been expected from him all along — and now he’s trying to build off that heading into what will likely be his final season with the Buckeyes.

“I was thrown into the fire, and I did my best,” Young said. “It was definitely a learning experience, and now I know what it’s going to take. And now I’m just trying to pull some of the young guys up with me so they can take some of that attention away from me and we can just all be one.”

One way or another, Jeremy Ruckert is going to be on the field more frequently for Ohio State. And if it means he might needs to take some snaps somewhere other than tight end, he’s got no problem with that.

The Buckeyes aren’t exactly short of options at H-back, either. And with K.J. Hill, C.J. Saunders, Jaelen Gill and perhaps Demario McCall all in the mix for the dynamic work at that position, Ruckert wouldn’t be the first person to come to mind to help there. But his ability as a pass-catching threat makes him somebody the Buckeyes want to feature, and spring is the time to experiment.

“We’re just trying something new,” Ruckert said. “It’s spring, so we’re putting a lot of stuff in, and I’m cool with it. I like it, because whatever I can do to help the team, I’m going to do. I’m down to do it.

“I’m just trying to go play. We’ve got a lot of depth at tight end, so hopefully that allows me to do that.”

Jashon Cornell kicks back to the inside for Ohio State

Playing on the inside might have been hard to imagine when Jashon Cornell first arrived at Ohio State, and after being shuffled around the defensive line, it certainly seemed like his career would end on the outside as expected. But as Cornell has continued to add weight to his frame while still boasting the kind of quickness needed to get to the quarterback, he’s now looking like a possible option to replace Dre’Mont Jones in that athletic, pass-rushing role on the interior.

“I didn’t think at all that I would become a three-technique. But as time went on, I started gaining weight and I started pass-rushing on the inside. I was like: ‘Wow, this is so much easier.’ It’s so much more fun.”

For at least a second on social media, it seemed like Rashod Berry might be teasing a return to the other side of the ball. Given the depth at tight end, it actually kind of made some sense that Berry might be able to have a bigger impact by helping out as a possible defensive end with one more position change in his career.

But in the end, Ohio State is sticking with the progress Berry has made and letting him see that through — which could mean more big plays like the touchdown grab in the Rose Bowl are in his future.

“[There’s confidence] because I’m just focused on one position,” Berry said. “All my energy and all my focus is on being better at one position. There was a thought [about defensive line], but I was at tight end, so I’m going to stay at tight end.”

The final protocol might not be officially nailed down, but Ohio State does appear to be on track to have Ryan Day calling plays — as he indicated earlier this spring he would.

Day had suggested he would let Kevin Wilson and Mike Yurcich take turns with that during camp as the Buckeyes look to find the right formula for getting the offense dialed up from the booth and the sideline. But for the most part, Ohio State has continued with a more collaborative approach that follows the lead of the new head coach.

“You kind of play off the script,” Wilson said. “Today we were play-calling, but the first 48 plays we had decided yesterday what we were doing. There wasn’t much in the heat of the moment. … We didn’t know what the defense was going to do, but we knew what we were going to do.

“There’s been a little bit of that, but typically we all kind of do it together. … Ultimately, it’s a group deal. Ultimately, [Day] is still the head coach. And ultimately, he’s still an offensive-oriented guy, so we’re going to follow his lead.”