The speculation, debate and conversations about Ohio State never end, and Lettermen Row is always ready to dive into the discussions. All week long, senior writer Austin Ward will field topics on Ryan Day and the Buckeyes submitted by readers and break down anything that’s on the minds of the Best Damn Fans in the Land. Have a question that needs to be tackled, like the one today about Jeremy Ruckert and the tight ends? Send it in right here — and check back daily for the answers.

How much will Day incorporate Ruckert into the offense to take advantage of his skills?

When it comes to pass-catching tight ends, there’s no real question that Jeremy Ruckert has the greatest upside on the Ohio State roster. He was the nation’s top-rated recruit at the position for a reason, and with a year to develop his body and pick up the rest of the responsibilities that come with playing there for the Buckeyes, there is reason to expect Ruckert to play a more prominent role.

But there are also a couple factors that need to be considered before penciling in Ruckert for a second-year explosion.

First, like Urban Meyer before him, Ryan Day isn’t going to put a tight end on the field who can’t hold up as a run-blocking asset. Ohio State tight ends can’t solely be targets for the passing attack, they also have to be able to hold up physically to help on the ground.

Secondly, there’s a healthy competition for playing time at the position that is probably a bit underrated outside of the program. And Ruckert is currently going through drills third behind Luke Farrell and Rashod Berry, which isn’t just a matter of making the younger guy pay his dues. 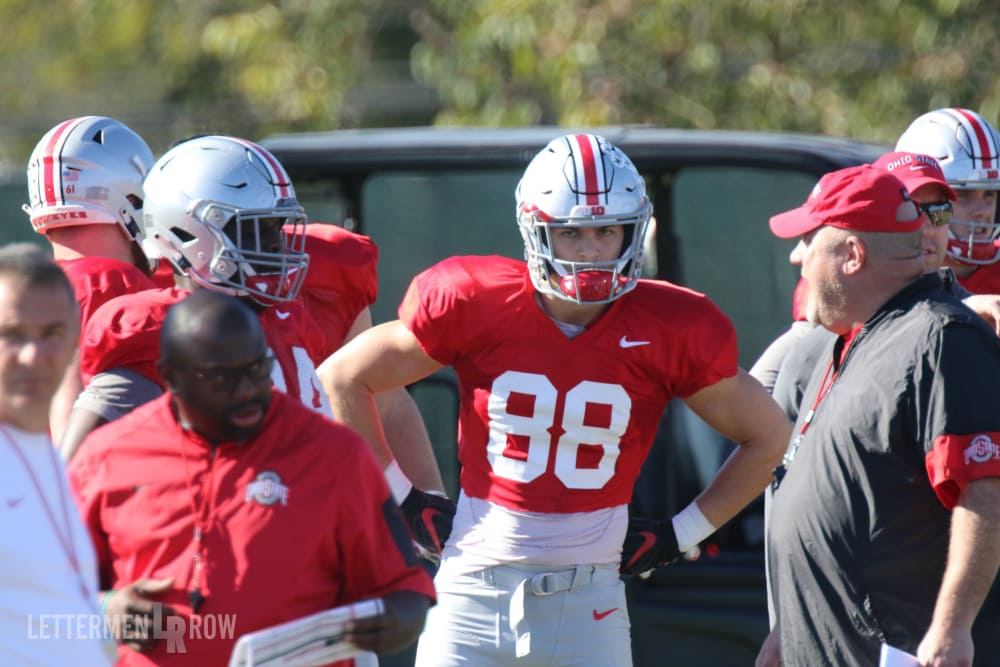 Both Farrell and Berry reaped significant benefits from playing extensively last season. They, too, stand to make improvements after another year in the system, another stint in the winter conditioning program and more time to develop their skills. Farrell had his ups and downs catching the football, but he still wound up with 20 receptions and really started to settle into that role more comfortably in the second half of the season. And while Berry has previously bounced around a couple positions, his eye-popping athleticism might really have a chance to be unleashed now that he’s been able to make a home at tight end.

So, if both of those guys are still improving and have shown that they can catch the football, that puts the onus on breaking into the rotation on Ruckert. Given his reputation, it’s certainly not out of the question that he could leap into the lineup ahead of those guys. But the most likely outcome at this point is that Ohio State uses all three of them, which also fits in line with some whispers that the coaching staff might be incorporating more two-tight end packages this season.

How all of that plays out remains to be seen, since it’s still so early in spring camp. And it’s also a bit premature to start expecting a ton of footballs to be thrown the way of any of those guys, because that’s a conversation the Buckeyes have had many times before.

But with three quality options at the position, it is safe already to assume that the tight end unit might sneakily be one of the strongest on the roster — and will have a significant impact for the Buckeyes one way or another.