The speculation, debate and conversations about Ohio State never end, and Lettermen Row is always ready to dive into the discussions. All week long, senior writer Austin Ward will field topics about the Buckeyes submitted by readers and break down anything that’s on the minds of the Best Damn Fans in the Land. Have a question that needs to be tackled, like the one today about Ohio State and the usage of tight ends as part of Position Week? Send it in right here — and check back daily for the answers.

It’s tougher to figure outÂ why the Buckeyes would need to do so, and it’s the same conversation they have every offseason when they start shaping the attack.

Yes, Jeremy Ruckert has the potential to be the best all-around player at his position in the country, and he’s flashed dazzling ability with his array of one-handed catches and red-zone success. There’s no question that Cade Stover has the ball skills to be a factor on offense, and Joe Royer is on the right track as he develops physically. Gee Scott brings a high-level background at wide receiver with him to the unit, and he offers some tantalizing potential to create matchup problems in the passing game.

All of them can move the chains and create issues for defenses inside the 20-yard line. And it’s a virtual certainty that Ohio State will take advantage of those skills a couple times per game again this season — but probably a long-shot bet to expect much more than that. 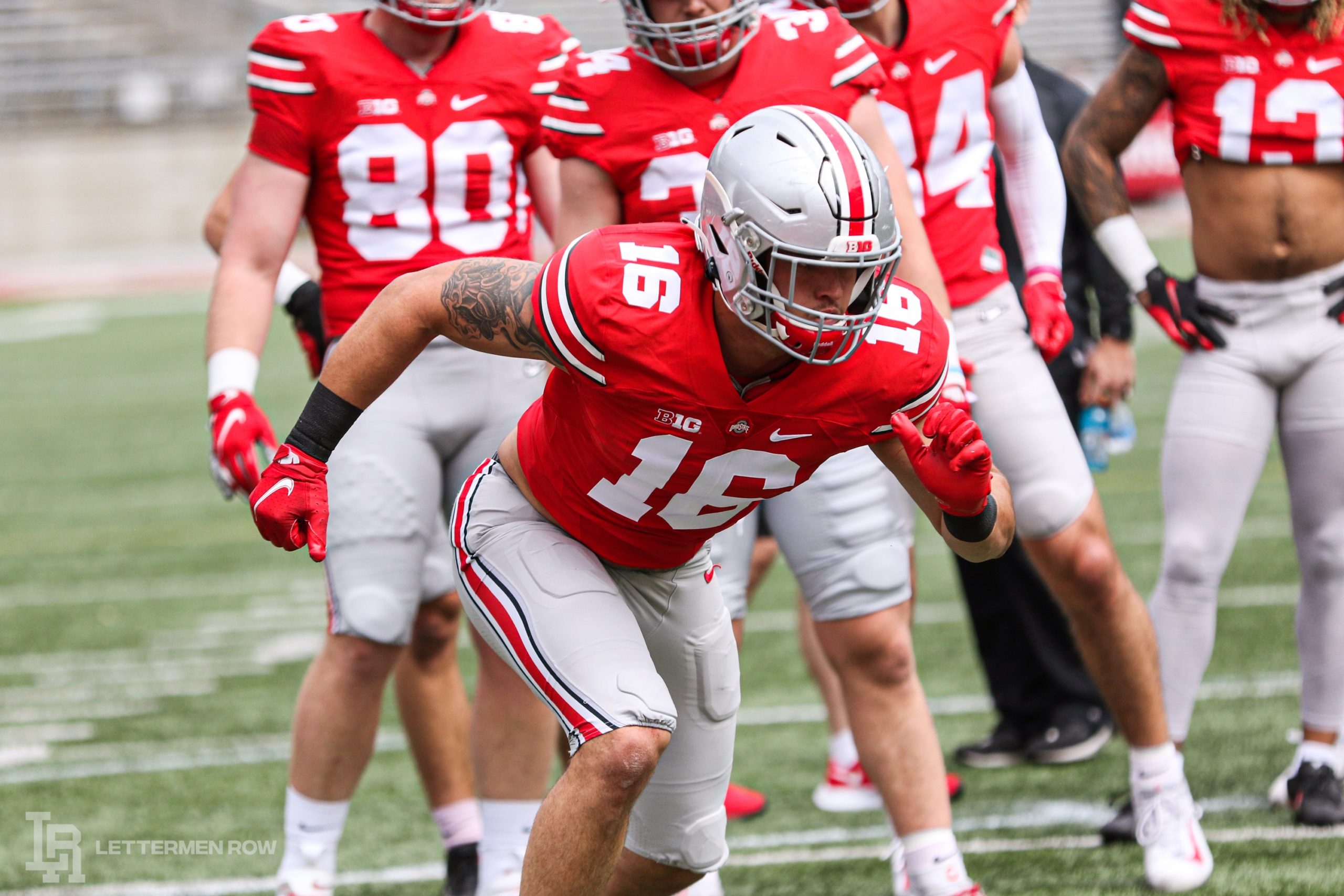 Ohio State tight end Cade Stover could be a weapon for the Buckeyes. (Birm/Lettermen Row)

There is still only one football. And when Ryan Day and Kevin Wilson make their list of weapons that need to keep heavy involved in the attack, it’s still a stretch to think even somebody as gifted as Ruckert is going to climb above elite wideouts like Chris Olave, Garrett Wilson, Jaxon Smith-Njigba or Julian Fleming. When it comes to building a power-spread attack, the tight ends are invaluable for their versatility — but their blocking is more useful in front of guys like TreVeyon Henderson, Master Teague or Miyan Williams than what they offer through the air.

It’s worth another reminder: This has nothing to do with the potential of Ruckert or anybody else on the unit. If Ohio State wanted to make him the most prolific receiving tight in the nation, that wouldn’t be all that hard. But the Buckeyes already have one of the nation’s most explosive offenses without tweaking that formula — one that already relies heavily on two-tight end sets that continues to give that unit a high volume of snaps, if not targets.

“If we flex [tight ends] out, we can go big,” Wilson said about the long-running debate last season. “But if we put those receivers out there, itâ€™s about as collectively fast an athletic a group of receivers Iâ€™ve ever been around. As a tight ends coach, I like those tight ends playing and I donâ€™t like when those fast guys come off.

“The trick, too, as weâ€™re keeping everybody happy, is we just donâ€™t get too much offense.”

That reality is there are a limited number of snaps in a game and only so many touches to go around in a game. Ohio State always uses them in the way it believes give the offense the most explosive potential on any given down, and that’s a tough pecking order to crack on a team with as much skill-position talent as the reigning Big Ten champs.

Could that change this season? Sure, but it isn’t exactly necessary.