COLUMBUS — Ohio State is in the middle of a defensive end renaissance.

Larry Johnson has lived up to the legendary hype that followed him from Penn State to Columbus. Since he arrived in 2014, he has produced three NFL Defensive Rookie of the Year winners in Nick Bosa, Joey Bosa and Chase Young. His players dominate the game, using a profusion of moves to overpower offensive tackles.Â All of them bring superstar potential, and Young was within reach of winning the Heisman Trophy in 2019.

The point is this: Ohio State has produced its best defensive ends since Larry Johnson took the defensive line job in 2014. And the Buckeyes don’t seem to be slowing down in developing top-notch talent. Zach Harrison and Tyreke Smith are each capable of rewriting the record books.

So in honor of Defensive Line Week at Lettermen Row, we’re breaking down the top five defensive ends in Ohio State history. Larry Johnson’s impact is all over the list. 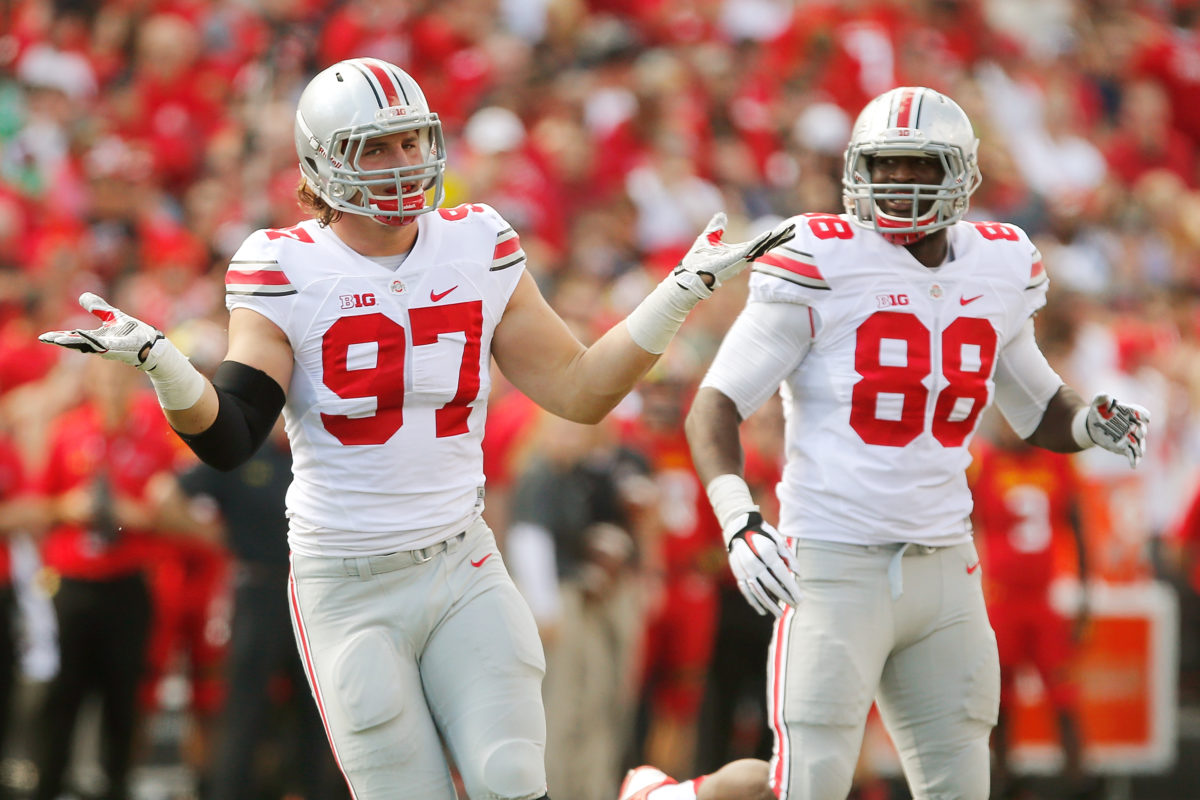 Joey Bosa developed into a top draft prospect with the help of Larry Johnson and Mickey Marotti. (Jonathan Ernst/Getty Images)

Joey Bosa is a physical freak, and the brunt of the development happened in Larry Johnson’s defensive line room at Ohio State. After earning freshman All-American honors, Bosa was a unanimousÂ firs-team All-American as a sophomore. He racked up 13.5 sacks on 55 tackles on the year, earning Big Ten Defensive Player of the Year honors while helping the Buckeyes capture their first national championship since 2002.Â With the help ofÂ Mickey Marotti and Johnson, Bosa matured into a 6-foot-5, 275-pound specimen who spent as much time breaking down film as he did in the weight room. Despite dealing with double- and triple-teams in his final season with the Buckeyes, Bosa earned consensus All-American honors for the second-consecutive season. He ranks third all-time in quarterback sacks with 13.5.

Before he was catching touchdown passes and lining up at linebacker with the New England Patriots, Mike Vrabel lined up at defensive end in Ohio State’s 4-3 front in the mid-1990s. An Akron native, he owns the all-time record for tackles for loss (66) and quarterback sacks (36). A member of the Ohio State Football All-Century Team in 2000, he made a noticeable impact in his sophomore season with 12 quarterback sacks. His 13 quarterbacks sacks in 1995 made him the Big Ten Defensive Lineman of the Year winner. He won the award for a second-straight season as a senior, also earning consensus first-team All-American honors with 48 tackles and nine sacks. Vrabel set the bar for defensive ends at Ohio State; he was inducted into the Ohio State Athletics Hall of Fame in 2012. 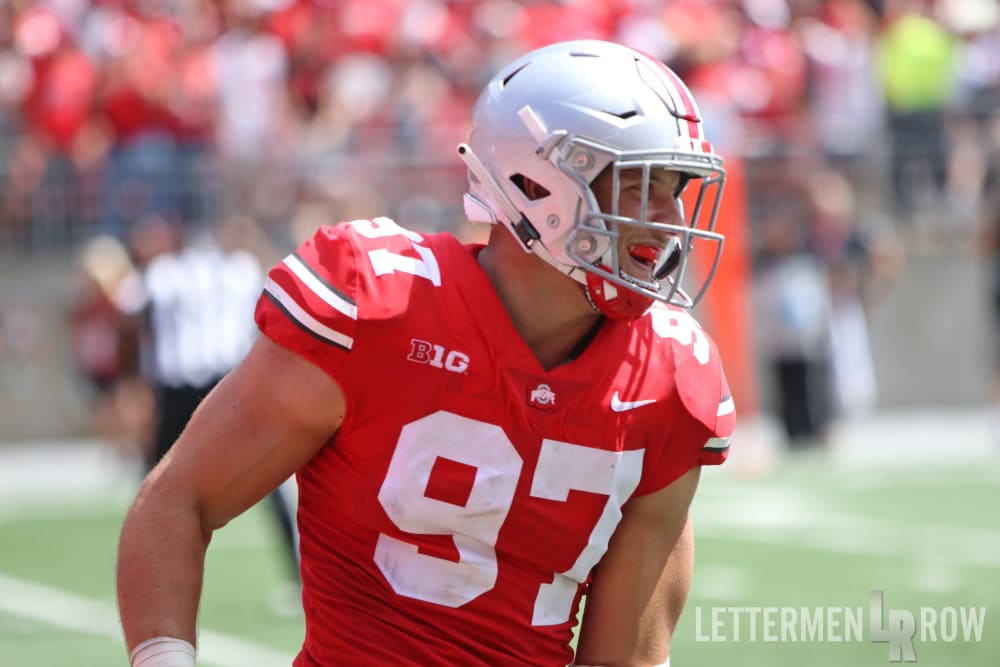 When Nick Bosa was healthy, he was one of the top defensive ends to ever play at Ohio State. (Birm/Lettermen Row)

The younger brother of Joey Bosa, Nick arrived at Ohio State with plenty of hype surrounding his potential. And when he was healthy, he exceeded expectations. He played in all 13 games as a rookie, recording 29 tackles — seven of which were for a loss — Â and five sacks. Similar to his brother, he had his best season as a sophomore. Bosa started seven games at defensive end in 2017 and promptly racked up 14.5 tackles for loss and a team-high seven sacks. He added a block kick en route to first-team all-Big Ten honors and winning the Big Ten Defensive Lineman of the Year award. With another full offseason with Larry Johnson, many tabbed him as the first-overall pick headed into the 2018 season. He played three game on the season, exiting the TCU game with an abdominal strain. Two days later heÂ underwent core muscle surgery, missing the entire season and ending his Ohio State career. While he doesn’t rank high on the all-time lists, there’s little doubt he is one of the most talented defensive ends in Ohio State history.Â

The last defensive player to make it to New York City as a Heisman Trophy finalist? Chase Young. The dominant season the defensive end put together in the fall of 2019 won’t be forgotten in Ohio State or college football circles for a very long time. Yes, heÂ shattered the single-season record for sacks with 16.5. But what made Young maybe the best to ever play the position at Ohio State was his impact on the game. Offensive tackles hopped offsides or were called for false starts all to try and get an edge on The Predator. But Young couldn’t be stopped; he could pull out every move he needed. He was at his best against Wisconsin in the Horseshoe in 2019, racking up four quarterback sacks and forcing a fumble. Along with winning Big Ten Defensive Player of the Year and Male Athlete of the Year, Young won the Chuck Bednarik, Bronko Nagurski and Ted Hendricks awards.