The Buckeyes don’t have the most in college football, that title belongs to USC with over 50. But Ohio State isn’t very far behind, proof of the talent that has come out of the wide receiver unit in Columbus. The Buckeyes are producing some top-flight talent recently since Urban Meyer and Ryan Day have come Ohio State with their high-powered offenses, having nine receivers drafted since Â the 2013 draft.

But for all the talent produced lately, Ohio State was producing the top receivers in college football throughout the 1990s and early 2000s.Â To wrap up Wide Receiver Week at Lettermen Row, we’re breaking down the top five wideouts in Ohio State history.

John Cooper took to a national recruiting approach in the 1990s, and arguably the best product to emerge was David Boston, a native of Humble, Texas. A two-time All-Big Ten first-team selection, he was a first-team All-American in 1998, too. From a statical standpoint, Boston is the best wideout to ever play for the Buckeyes. He holds the school record for career touchdown receptions (34), most 100-yard games (nine) and is second all-time in pass receptions (191) and pass reception yards (2,855). His 1998 All-American season was his best at Ohio State as he collectedÂ 85 passes for 1,435 yards, including a 217-yard game against Michigan, sparking Ohio State’s 31-16 win. Boston is also well known for his five-yard touchdown grab in the 1997 Rose Bowl from Joe Germaine, delivering the Buckeyes the win with 19 seconds remaining. With a 6-foot-2 frame, he could catch balls in traffic while also possessing the speed to outrun defensive backs.

Cris Carter was supposed to play both basketball and football at Ohio State, but he never stepped on the hardwood after his first fall in Columbus. The receiver finished his rookie season with 41 catches for 648 yards and eight touchdowns, including a Rose Bowl-record nine receptions for 172 yardsÂ in the Buckeyes loss to USC. One of the most talented wideouts to come through Ohio State, Carter had great hands and was known for his acrobatic-type catches. His one-handed grab in the 1985 Citrus Bowl is still one of the most jaw-dropping plays in college football. Ohio State quarterback Jim Karsatos was trying to throw the ball out of bounds but Carter miraculously caught it and got a foot inbounds. His career at Ohio State was cut short by a season when it was discovered he had secretly signed with a sports agent, resulting in him being declared ineligible. A consensus All-American for his 1986 season, Carter’s name is still all over the Ohio State record books despite playing just three seasons. He ranks third in pass receptions (168), fourth in pass reception yards (2,725) and third in touchdown catches (27). 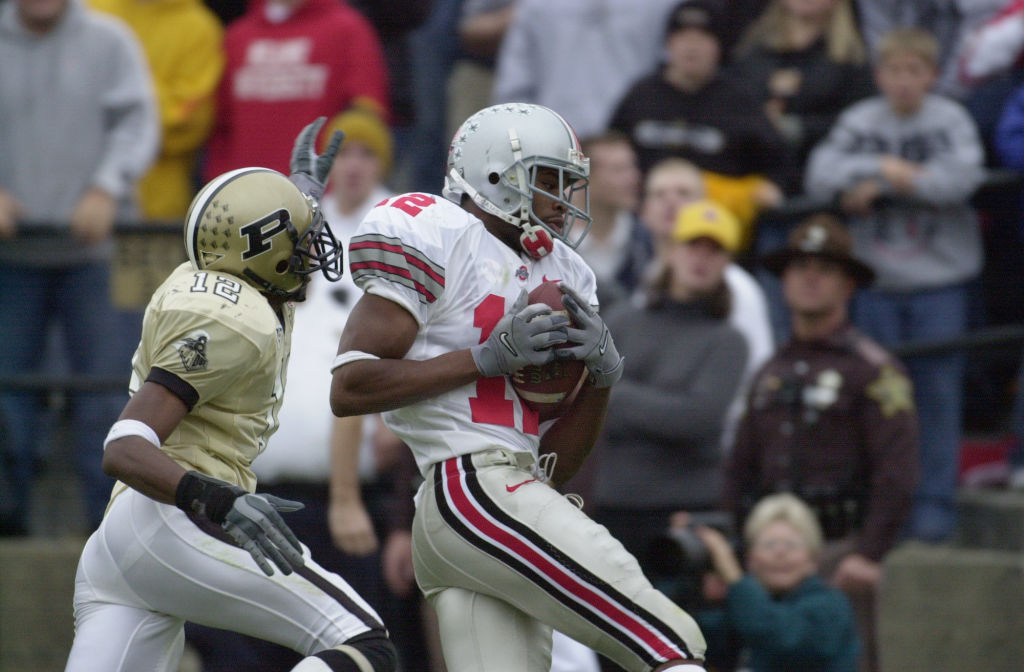 Ohio State never wins a championship without Michael Jenkins on its roster. He made the most memorable play in Buckeyes history at Purdue, pulling down the touchdown catch on the famous “Holy Buckeye” play. Ranked No. 2 in the BCS rankings at the time, Ohio State travelled to Purdue in early November 2002 with a perfect record. But the Boilermakers held a 6-3 lead late in the fourth quarter. On 4th-and-1 with less than two minutes remaining, the Buckeyes opted to go for it and pass. Craig Krenzel dropped back to pass and found Jenkins for a 37-yard touchdown down the left sideline. The win catapulted Ohio State to the BCS National Championship game against Miami, where Jenkins delivered a huge play again. Krenzel found the receiver on another critical situation, this time fourth-and-14 in the first overtime. The two connected as Ohio State went on to win the national championship, 31-24. Jenkins finished his career first in school history with 2,898 receiving yards along with 16 touchdowns on 157 receptions.

The only Fred Biletnikoff Award winner in Ohio State history started his career as a walk-on. A Columbus native, Terry Glenn grew up dreaming of one day playing for the Buckeyes. After redshirting his first season at Ohio Season, he earned a scholarship the following spring. After two seasons of minimal action, Glenn broke through in his redshirt junior season in 1995. With Joey Galloway off to the NFL he had the opportunity to shine. The receiver pulled down 64 catches for 1,411 yards and 17 touchdowns in 12 games. Ohio State’s game against Pitt that season will never be forgotten, as Glenn caught nine passes for a school-record 253 yards and four touchdowns. He scored on pass plays of 75, 61, 36 and 12 yards, showing off his speed and big-play ability. HeÂ averaged a remarkable 22 yards per catch on the season, an Ohio State record at the time.

Sure, he is still at Ohio State. But he could’ve left for the NFL this past season and been a first-round pick. With a final, full regular season with the Buckeyes, Chris Olave is within reach of taking the title of most receiving touchdowns in school history. If he can put together a 1,123-yard season, he’ll have the school record for the most receiving yards. Seems like a lot, but he had 749 yards last season in just seven games. Ever since breaking onto the scene as a freshman against Michigan, Olave has been building a legacy with the Buckeyes. His broken route in the 2019 College Football Playoff against Clemson cost Ohio State a shot at a national title, but he came back and caught two touchdown passes last season to beat the Tigers and help the Buckeyes get back to the championship game. Olave is the best returning wide receiver in the country this season, and he has a real shot at rewriting the Ohio State record books.