COLUMBUS — Maybe it doesn’t feel like it, but the work on the field has already started for Ohio State.

Urban Meyer wasn’t there for the first practice on Friday. The media wasn’t either, so there were no press conferences from the head coach or a flood of pictures from the fields outside of the Woody Hayes Athletic Center to celebrate the glorious return of football.

Obviously the Buckeyes have other concerns right now with Meyer on paid administrative leave and an independent investigation into how the program handled the allegations against Zach Smith in 2015. But there is absolutely still going to be a season, Ohio State undoubtedly still has a team capable of defending the Big Ten title — and it might be nice to take a break from the off-the-field drama and actually break down the game for a bit, right?

So, let’s dig into it with five bold predictions for training camp. 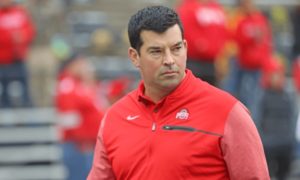 Predicting how a group of college kids respond to adversity is a dangerous game, and there’s no guarantee that Ohio State will be able to handle the ongoing circus with the coaching staff without any issues. But if ever there was a roster that was positioned to tune out the distractions while Meyer is away, surely it’s one with so many veterans returning on both sides of the ball and a coaching staff with two other former head coaches around to assist Ryan Day and keep the program running smoothly. The Buckeyes also don’t have all that many position battles to monitor this month, so it should be able to focus on gearing up to defend the Big Ten title.

Eventually Ohio State is expecting Tuf Borland to return this season from the Achilles injury he suffered in the spring. But an exact timeline is hard to pin down for the middle linebacker who made such an impact once he became a starter last season, and by the time he gets healthy, Baron Browning might have already emerged as a star in the middle. The Buckeyes, of course, have had success rotating at that key position before, including with Raekwon McMillan — the guy Browning is drawing so many comparisons to these days. Justin Hilliard is also a viable option for Ohio State, but it feels like Browning’s time has arrived.

There is always clamoring for the next big thing, and Josh Myers is understandably generating excitement for his potential. But Taylor has patiently worked and waited behind the best centers in the country for his turn, and he’s both physically and mentally ready for the huge responsibility of anchoring the offensive line for Ohio State. On paper, this is shaping up to be the deepest, most talented offensive line the program has had in a long time. And while Taylor never came in with eye-popping recruiting rankings like some of his competition, his veteran presence and the lessons learned under the wings of Billy Price and Pat Elflein should pay off for the Buckeyes.

Look out for Rashod Berry as X-factor for Ohio State

Injuries during spring camp kept Rashod Berry to flashing his potential on the big stage in the Horseshoe again, and he’s been something of a forgotten man this summer as the conversation has focused on the arrival of the nation’s top recruit at tight end, Jeremy Ruckert. But another year to get comfortable and find a home at the position should allow somebody with Berry’s freakish, versatile athleticism to really start tapping into his potential and create problems for opposing defenses. Luke Farrell might start camp as the first-team option, but Berry is going to make a big push in August. 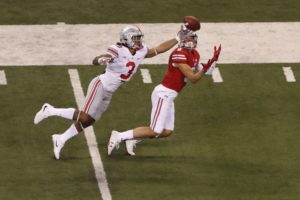 Why is it a bold prediction to predict a redshirt junior coming off a season with 44 tackles, 2 interceptions, a forced fumble and a recovery will still be a starter for Ohio State? Ordinarily it wouldn’t be, but Jeffrey Okudah has all the makings of an elite cornerback and former 5-star recruit Shaun Wade is now healthy, so the competition is going to heated for playing time in the secondary. But Arnette is a much more solid performer than he ever seems to get credit for, and he’s going to remain a fixture for the Buckeyes alongside Kendall Sheffield. That doesn’t mean Okudah isn’t going to play, of course. But Ohio State should be able to get back to the three-man rotation that was so successful two years ago, with all of them winding up earning starter designations from the coaching staff.