Ohio State finally has everything it could want on offensive line
Article written by:

COLUMBUS — Ohio State finally has everything it could ask for from an offensive line.

Sure, the Buckeyes have had no shortage of NFL blockers come through the program over the last few years. There was a truly elite unit that propelled the team to a national championship. And some of the most trusted leaders Urban Meyer has ever coached came from that group of Slobs in the trenches.

But itâ€™s never been a secret that even the best of those front lines for the Buckeyes didnâ€™t have much behind them, often forcing them to hold their breath, rely on luck and hope for good health. Now, after years of fruitful recruiting combined with consistent development, Ohio State should finally be able to relax.

â€œI don’t see us with guys that can’t play,â€ Meyer said this spring. â€œI see guys that are all going to be swinging for an opportunity, and they’re talented enough to play.â€

Top to bottom, that certainly hasnâ€™t been the case for Ohio State during his previous six seasons in charge. But Meyer can check every box on his wishlist heading into training camp this year.

Positional flexibility? The Buckeyes have enough versatility on hand that a guy like Joshua Alabi could potentially play at any of the five spots on the line, and there are multiple candidates like Branden Bowen or Malcolm Pridgeon who could either slide from guard to center or outside to the edge. 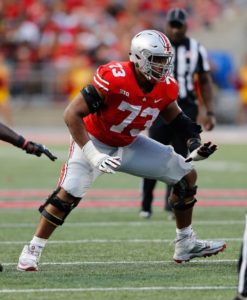 Michael Jordan is heading into his third season as a starter for Ohio State. (Joseph Maiorana/USA TODAY Sports)

Top-end talent? After a rocky start to his career, Isaiah Prince has bounced back to become one of the best tackles in the Big Ten and a future pro. Michael Jordan is heading into his third year as a regular thanks to the canâ€™t-miss potential that made him a starting guard as a freshman. And Thayer Munford is surging into position to be the anchor at left tackle as sophomore.

Veteran presence? Aside from the experience of Prince, center Brady Taylor may not have that same level of game reps under his belt, but the fifth-year senior has been around for a long time learning the system and studying under back-to-back Rimington Trophy winners.

Thereâ€™s heated competition for playing time. Thereâ€™s an opportunity for Ohio State to rotate and keep linemen healthy and fresh. And there finally shouldnâ€™t be a need to use the same name twice on a two-deep roster.

â€œObviously you can only start five, so some of these guys that are really good arenâ€™t going to start,â€ offensive line coach Greg Studrawa said in the spring. â€œBut if they have a role to go in there and play and theyâ€™re needed at a certain time, that keeps the depth, that develops the cohesiveness, thatâ€™s all the things that you want.

â€œYou really want to be able to rotate guys if you can. Now, one of the other things about offensive line play is you have to get a cohesive unit working together, too. I donâ€™t want to just pull guys out for the sake of pulling them out. But the ability to have depth if a guy needs a break, if a guy gets dinged [is important] â€“ it happens just about every game. So to put a guy in there and know youâ€™re not going to drop off a level of play, thatâ€™s outstanding, thatâ€™s the confidence.â€

The Buckeyes havenâ€™t been lacking in that with their first unit under Meyer. And those guys certainly set a high standard moving forward.

There were always some questions, though, about what would happen if the depth got tested. And now the only thing Ohio State is trying to figure out is which five guys should actually be on the field first.

â€œNope,â€ Studrawa said when asked if he knew his starters in the spring. â€œThey would be pretty good though.â€

That, of course, is exactly the kind of good problem Ohio State has always wanted to solve.