COLUMBUS — Maybe it doesn’t really make that much difference who wins the Ohio State quarterback position.

Considering the star-studded array of wide receivers that should certainly help simplify that job, the Buckeyes probably can’t go wrong with any passer.

It doesn’t hurt that all three candidates at quarterback are each capable of playing at a high level, of course. But the situation for a first-time starter couldn’t be more appealing than the one Ohio State has to offer with the nation’s top-two returning targets and no shortage of four- and five-star recruits in reserve behind them.

â€œI love it,â€ Buckeyes wide receivers coach Brian Hartline said. â€œI love the situation with a young quarterback. It just asks us and demands us to be more detailed than ever. I mean, not that these guys canâ€™t bail us out at times, but to be exact with landmarks, be very clean with body language to not confuse people. Having a younger quarterback that is maybe not learning it all for the first time, but they also donâ€™t have a large body of work –Â I think itâ€™s awesome [for the receivers].

“I think it provides a lot of clear direction on whatâ€™s expected, are we doing it, are we not and then we donâ€™t have the cloudiness all the time of maybe quarterbacks making us right.â€

This time around, Ohio State has a collection of wideouts who can return the favor and help make a new passer right thanks to the sharp route-running, reliable hands and blazing speed the unit has across the board.

Just how dangerous can the Buckeyes be in the passing game with Chris Olave and Garrett Wilson leading the way? That’s the first of Five Questions for the Ohio State unit as Wide Receivers Week kicks off at Lettermen Row. 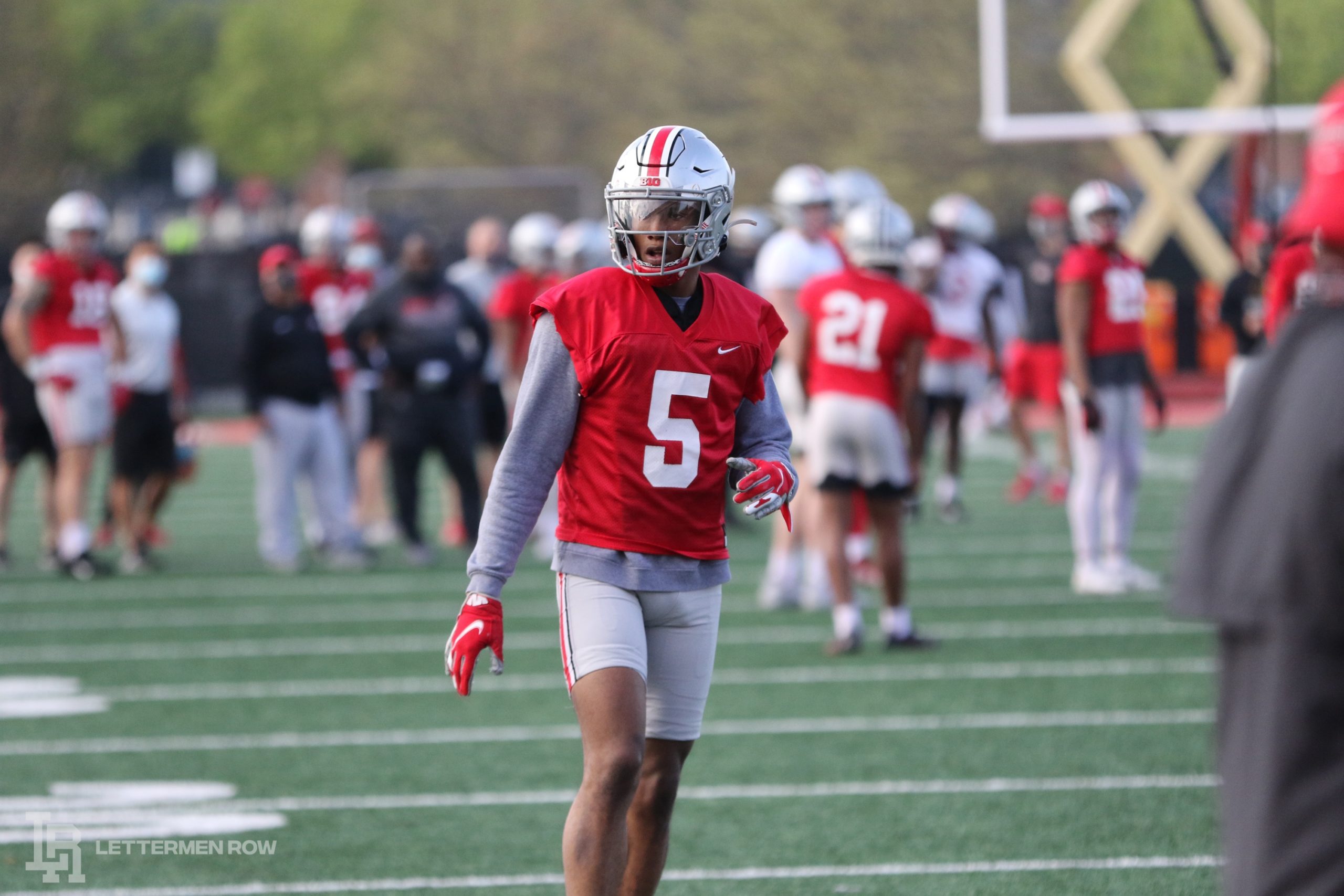 Who will lead Ohio State in receptions?

The consensus rankings have Chris Olave and Garrett Wilson pegged as the top-two receivers in the country, an almost unheard of situation for one offense heading into the season. Both have already proven they can live up to that hype, Olave with his knack for meeting the moment in big games and Wilson with his explosive athleticism. The Buckeyes are going to feature both of them prominently — and the friendly competition to lead the team in catches and touchdowns will be fascinating to watch. With Wilson moving back to the perimeter after a season of terrorizing defenders in the slot, Ohio State can stretch the field on either side of the formation and strike for deep shots at any time. Good luck to defensive coordinators trying to figure out how to slow down those two Buckeyes.

How much does departure of Jameson Williams impact Buckeyes?

Losing anybody with both high-end speed and a couple years of development in the program will always sting some. But no unit in the country was better equipped to handle a surprising transfer than Ohio State, and honestly the post-spring departure of Jameson Williams to Alabama isn’t likely to change much for position coach Brian Hartline. Williams had a fantastic camp and was definitely in the rotation for the Buckeyes, but he wasn’t going to be a starter with Olave, Wilson and Jaxon Smith-Njigba solidified in those top roles. Once a healthy Julian Fleming returned to the field, Williams was going to have his hands full competing for snaps against the former five-star and early enrollee Marvin Harrison Jr. as well. If there’s any kind of lingering impact, it’s likely only to show up with a depth chart that is now relatively thin behind the game-day rotation now that reserves like Jaylen Harris and Ellijah Gardiner are no longer around either. 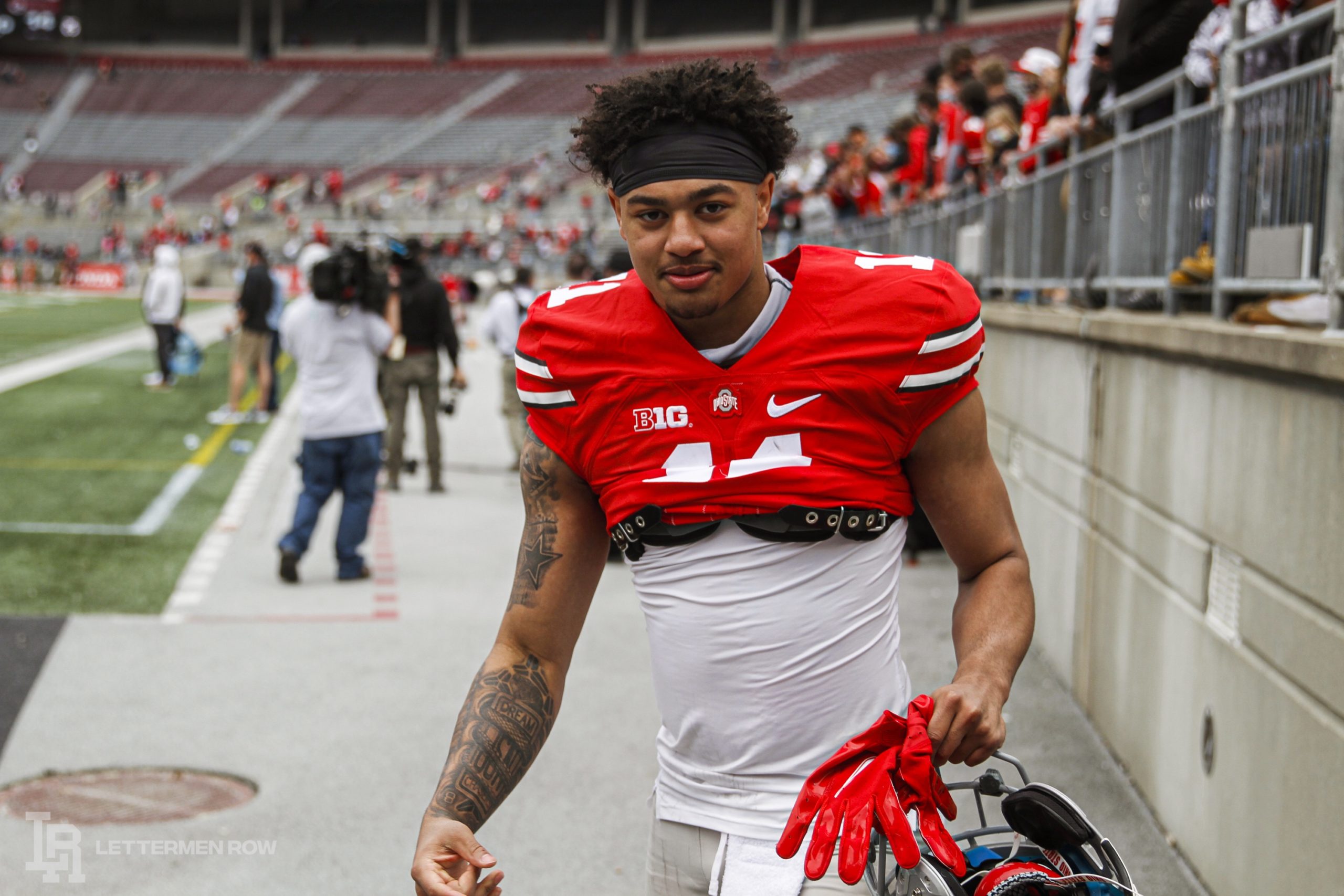 Ohio State wide receiver Jaxon Smith-Njigba will be a threat for the Buckeyes. (Birm/Lettermen Row)

The buzz started building shortly after Jaxon Smith-Njigba arrived on campus, and it’s only growing louder now that the sophomore is getting a normal year of development. The fact that Smith-Njigba was able to make 10 catches and snag one of the most ridiculous touchdowns of the season as a true freshman despite all the challenges of the COVID year should serve as a reminder of just how talented the Texan is at receiver. Add in that Ohio State feels comfortable enough with his skill set to move Garrett Wilson back to the perimeter and it becomes even more clear how much potential Smith-Njigba is bringing to the Buckeyes. The attention on Wilson and Olave is justified, but it could easily be Smith-Njigba’s emergence that makes the offense hum with a three-headed monster at wideout.

There was always going to be a transitional period for Julian Fleming at Ohio State, and he knew that going into his freshman season. Obviously he wasn’t expecting it to come with a bunch of COVID-related hurdles that kept him from getting the valuable on-field experience needed as the five-star tried to become a complete receiver after years in a run-heavy system in high school. Nagging injury issues that also limited him in spring camp didn’t do Fleming any favors either, but a fully-healthy version of the freakish athlete is expected in August — and he’ll get his chance to become a factor in Ohio State’s deep rotation. How big will the leap be for Fleming in Year Two? The expectations within the Woody Hayes Athletic Center remain sky high for a guy with his skill set and willingness to work.

Where does Marvin Harrison Jr. fit into plans as freshman?

The Buckeyes have had so much recruiting success at wide receiver, in some ways that’s made it hard to peg just who will emerge first in each class. But Marvin Harrison Jr. planted his flag in a hurry as an early enrollee, consistently grabbing touchdowns during open-viewing periods and then capping his first set of practices with the Buckeyes with a dynamic performance in the spring game. Both Emeka Egbuka and Jayden Ballard bring plenty to the table at Ohio State, obviously. But it was Harrison who looked the most championship-ready in March and April, and that probably should come as no surprise given the Hall-of-Fame genetics passed down from his father. Harrison has instant-impact potential, and he’s going to be a part of the rotation right away.