The speculation, debate and conversations about Ohio State never end, and Lettermen Row is always ready to dive into the discussions. All week long, senior writer Austin Ward will field topics about the Buckeyes submitted by readers and break down anything that’s on the minds of the Best Damn Fans in the Land. Have a question that needs to be tackled, like the one today about how Ohio State will fill out depth chart in the backfield? Send it in right here — and check back daily for the answers.

Which WR do you think emerges during the offseason as 3rd on the depth chart, behind Chris and Garrett?

The Ohio State depth chart at wide receiver is about to expand again, right back to where Brian Hartline wants it.

So, who is going to be the third option? That probably just depends on the situation or the perspective, because the Buckeyes are once again going to be able to rotateÂ at least six targets from one of the most talented units in the country.

Obviously Chris Olave and Garrett Wilson will be the headliners. And with a terrific tandem like that on the roster, there would understandably be a temptation to just keeping leaning on those superstars as frequently as Ohio State did last season when it was relatively inexperienced beyond those top weapons. But Brian Hartline prefers to keep his wideouts as fresh as possible, and he should certainly be able to do that now thanks to the absurd recruiting run the position has been on over the last couple cycles.

Jameson Williams has the most experience of the returners, and his dazzling speed was put on display a couple times last season as his emergence into a dangerous deep threat continued. His role should only grow heading into his junior campaign, but he’s going to have plenty of competition for the football coming with Julian Fleming, Jaxon Smith-Njigba and Gee Scott all heading into their second seasons with the program — not to mention the early enrollees who will be trying to get up to speed in spring camp. 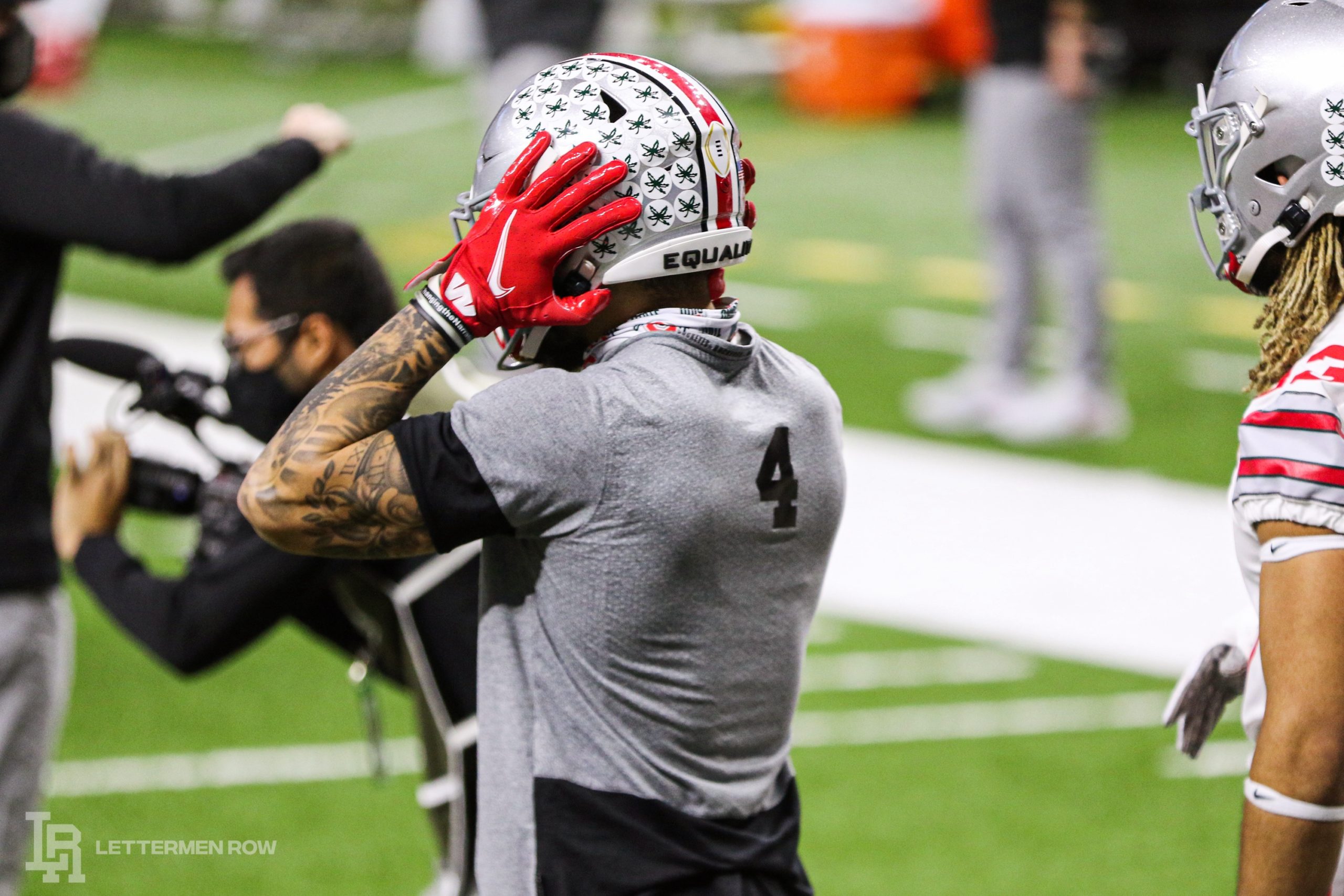 Smith-Njigba might be a smart-money pick to finish third in receptions as a sure-handed security blanket who has impressed since Day One with his professional approach to the craft. But maybe when it comes to touchdown grabs, Fleming’s late-season emergence as he got more comfortable with his route-running and the physical tools that are reminiscent of a young Michael Thomas might lead to a jump in production there. Or perhaps Scott solidifies an expanded snap count thanks to his physical blocking and ability to use his big frame to get open for chain-moving receptions.

Essentially, that third spot will be constantly evolving — a moving target, so to speak. Ohio State has plenty of evidence of the kind of music a six-man band can provide on offense, and that approach comes with both short-term and long-run benefits. The Buckeyes can keep their top guys in peak condition while also mixing and matching personnel to find the best matchups every week. And they also get valuable reps and experience for the next wave of wide receivers, who stay engaged and know there’s a role to play until it’s their turn to lead the way for Ohio State.

So, who will be the third wheel for the Buckeyes? That depends, because there will be a minimum of four of them available when the situation calls for it.