The speculation, debate and conversations about Ohio State never end, and Lettermen Row is always ready to dive into the discussions. All week long, senior writer Austin Ward will field topics on Ryan Day and the Buckeyes submitted by readers and break down anything that’s on the minds of the Best Damn Fans in the Land. Have a question that needs to be tackled, like the one today about the next wave of wide receivers? Send it in right here — and check back daily for the answers.

Which WR Mack or victor do you see taking the lead next year? Does it come from someone else like blue smith maybe?

Maybe there won’t be three captains from the same unit again next season. But the culture, standard and legacy established by Ohio State wide receivers Johnnie Dixon, Parris Campbell and Terry McLaurin is going to live on thanks to the next wave of veterans behind them — and there just so happens to be another trio of seniors waiting for their turn to lead the way.

There won’t just be one guy taking the torch, which is exactly why the Buckeyes can once again look to Zone 6 as a group that can set the tone for the entire program. With Austin Mack already somebody who has earned respect in that room, K.J. Hill returning for another season after multiple years of production and Binjimen Victor committed to the cause for one more campaign, everything their predecessors and position coach Brian Hartline have worked to build is in good hands.

And perhaps more important for Hartline? The next wave is already lining up, and that should ensure the wide receivers remain key figures for years to come with a tireless worker like Chris Olave already emerging and touted targets like Blue Smith and Kamryn Babb waiting for their opportunities as well. Throw in a five-star receiver like Garrett Wilson who is every bit as solid off the field as he is on it and the Buckeyes have the makings of something built to last. 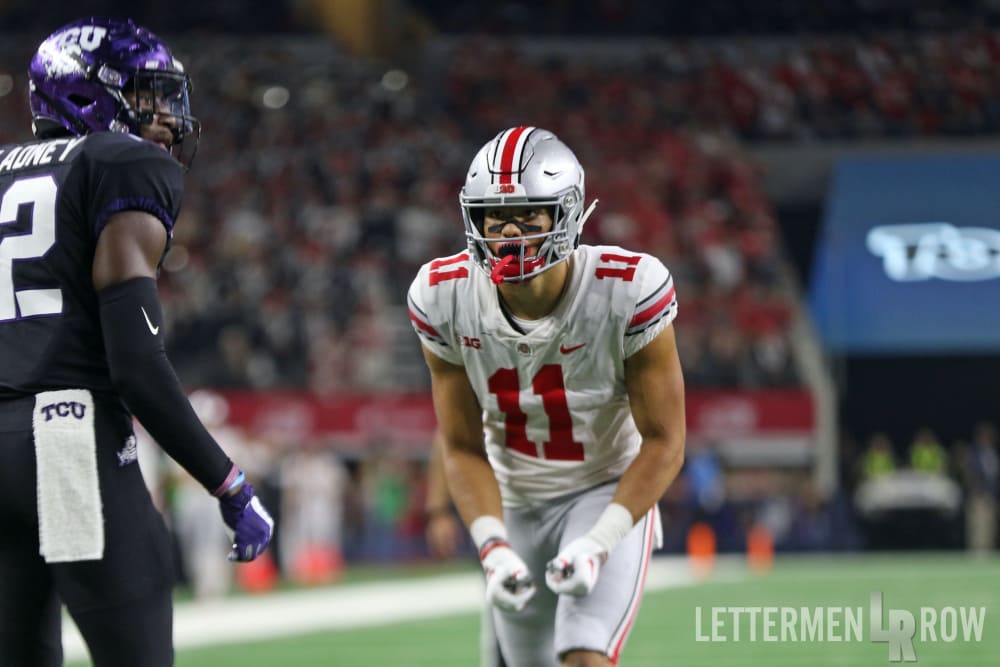 Ohio State wide receiver Austin Mack is looking to bounce back next season for the Buckeyes. (Birm/Lettermen Row)

Now, when it comes to who will lead the way statistically, it’s a bit early to be making those predictions. But Hill would seem to be a safe bet to write his name all over the record books at Ohio State and finish the season with the most receptions. Mack’s all-around game as he works back from injury and inconsistency makes him a safe bet to fill a McLaurin-type role for the Buckeyes. And while Victor might not get the same volume of targets as the other guys, he’s a dangerous red-zone threat and always a candidate to take the top off a defense — which might make him a dark-horse to set the pace for touchdowns.

Of course, that doesn’t even factor in what Olave might bring heading into his second season with the program. Or how Jaelen Gill might emerge in an H-back role. Or what a healthy Babb might do once he shakes off the injury bug. Or how much Wilson or Jameson Williams might be able to contribute for the Buckeyes as true freshmen.

But that group will all be taking cues from a trio of veterans. And that’s a formula that Ohio State knows for sure will work.