The speculation, debate and conversations about Ohio State never end, and Lettermen Row is always ready to dive into the discussions. All week long, senior writer Austin Ward will field topics about the Buckeyes submitted by readers and break down anything that’s on the minds of the Best Damn Fans in the Land. Have a question that needs to be tackled, like the one today about Ohio State and the use of the wide receivers as part of Position Week? Send it in right here — and check back daily for the answers.

Will the offense run more 5 wide receiver sets to take advantage of the wealth at the position?

Ohio State can do just about anything it could ever dream of with its collection of wide receivers.

So, if it wanted to deploy a free-wheeling, fun-and-gun, five-wide attack this season, Ryan Day could certainly dial it up. But the Buckeyes almost certainly won’t do that for a variety of reasons — starting with the fact that the math doesn’t work.

If the situation is right, maybe Ohio State would occasionally have a couple packages that feature all of those dynamic weapons. And it’s certainly wild to think about an offense that has Chris Olave, Garrett Wilson, Jaxon Smith-Njigba, Julian Fleming and either Marvin Harrison Jr. or Emeka Egbuka on the field at the same time. But it wouldn’t really be practical considering Day’s offensive philosophy or what it would mean for other talented position groups. 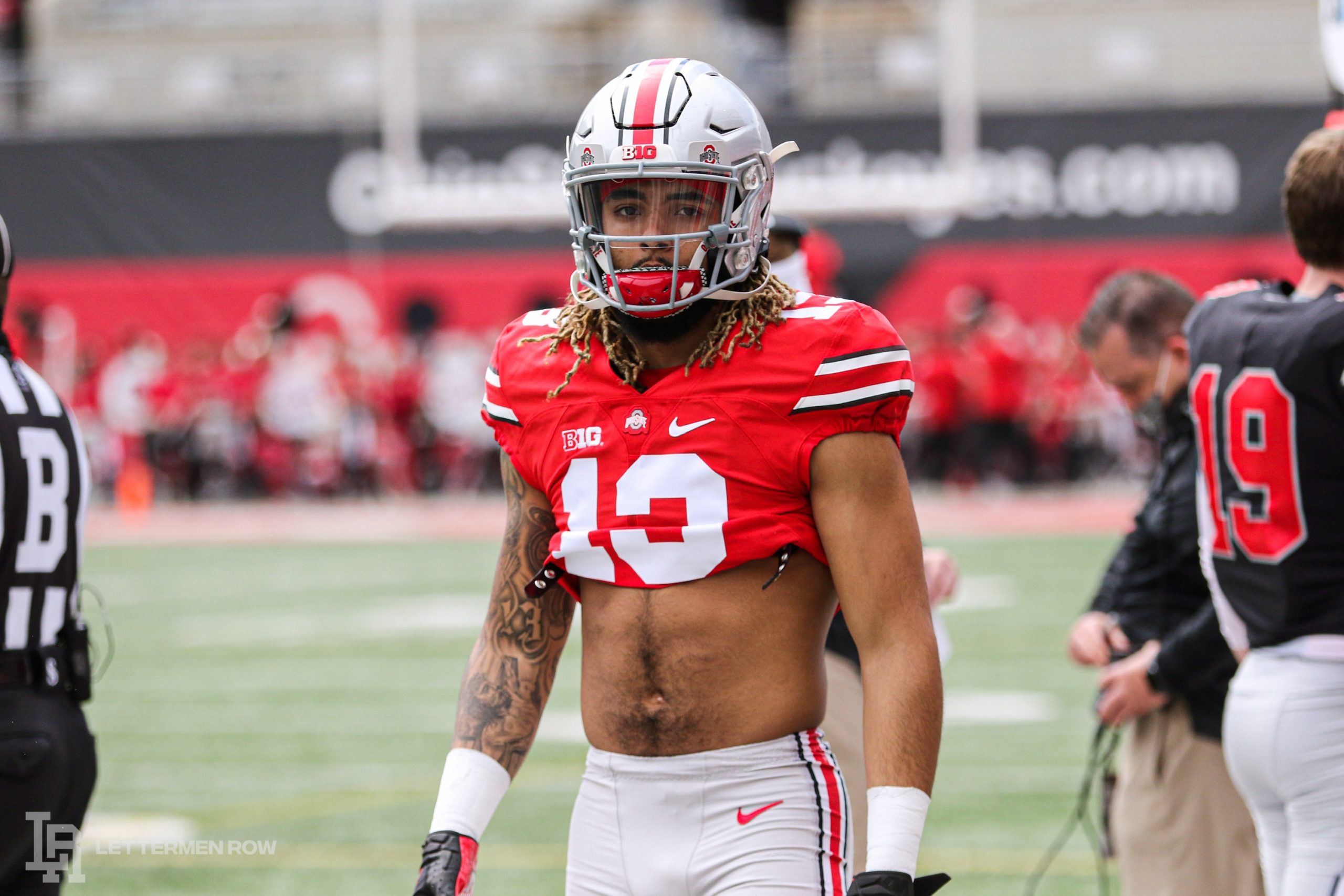 In a five-wide situation, something has to give with another unit. Is Ohio State really going to want to take away the threat of the run by sending Miyan Williams or TreVeyon Henderson to the sideline? Unlikely. With Jeremy Ruckert emerging as one of the most important cogs in the offense, would the Buckeyes remove tight ends from the equation? Almost certainly not, particularly since it has trended toward more two-tight sets rather than finding more ways to cram receivers into the formation. The conversation here really boils down to the same determining factor when it comes to the debate about spreading around touches on offense: There is a finite amount of spots on the field, and putting five wideouts out there means other important weapons have to come off.

When it comes to the six-man rotation Ohio State favors, the program is absolutely set for game days. But beyond that group, there is almost no safety-net depth for position coach Brian Hartline. While that’s really more of an issue for practice and scout-team purposes during the week, it’s also one reason why the Buckeyes wouldn’t be in a hurry to put most of those guys on the field at the same time. Granted, this question probably wasn’t a suggestion that Ohio State would completely overhaul the playbook to go with five-wide personnel groupings all the time. But even ramping up the usage would potentially come at the expense of allowing the Buckeyes to use its substitution packages to keep everybody fresh, which might then prevent Day from pushing the up-tempo envelope the way he wants.

For all the credit Ryan Day and Kevin Wilson deserve for modernizing the passing attack at Ohio State, at their core both guys want to hang their hats on a powerful rushing attack. That means tight ends and running backs are mandatory. They also know it will be imperative to put a first-time starting quarterback in position to thrive. That means offensive balance and protection in the pocket — which again means tight ends and running backs in the formation. Now, the versatility of tight ends like Jeremy Ruckert and Gee Scott can allow for Ohio State to get creative and essentially add two more targets for the passing attack. And a hybrid back like Evan Pryor could potentially line up anywhere on the field and provide a variety of threats like Curtis Samuel once did for the Buckeyes. So, there could be times that Ohio State goes with an empty backfield, but it would almost always do thatÂ withoutÂ putting five wide receivers on the field.

If an Air Raid coach had his hands on this group of wide receivers, he would be in heaven. But for Ryan Day, it probably won’t be that challenging to resist the urge to use all of his weapons at once.