Now the Buckeyes should have a chance to show it off again in the NCAA Tournament.

With Kaleb Wesson returning from suspension, another gritty defensive effort and plenty of help from a more balanced supporting cast, Ohio State got the win it badly needed in what amounted to a Big Dance eliminator against Indiana in the Big Ten Tournament on Thursday at the United Center. The Buckeyes will move on to play Michigan State on Friday after knocking off the Hoosiers 79-75 — and more important for coach Chris Holtmann, his team should also be advancing on Selection Sunday.

There is plenty to break down after what turned into a nail-biting affair for the Buckeyes. But Lettermen Row is starting that all right here with Three Points as Ohio State appears to have moved off the bubble and extended its season.

Even when the sophomore forward isn’t scoring himself, his mere presence seems to transform the offense for the Buckeyes. The attack is still relatively limited, which isn’t a new development dating back to the start of the season with this roster. But Wesson creates spacing, he gives Ohio State a reliable interior presence that must be accounted for and his passing is really underrated for a big man. Of course, his production when he’s finishing around the rim is something that was sorely lacking during his three-game suspension, and Indiana had its hands full trying to slow him down — particularly in the first half. There’s no way to know for sure, but Ohio State might not have even had its postseason fate left up to chance in the Big Ten tournament if he had been around for either of the last couple games in the regular season. 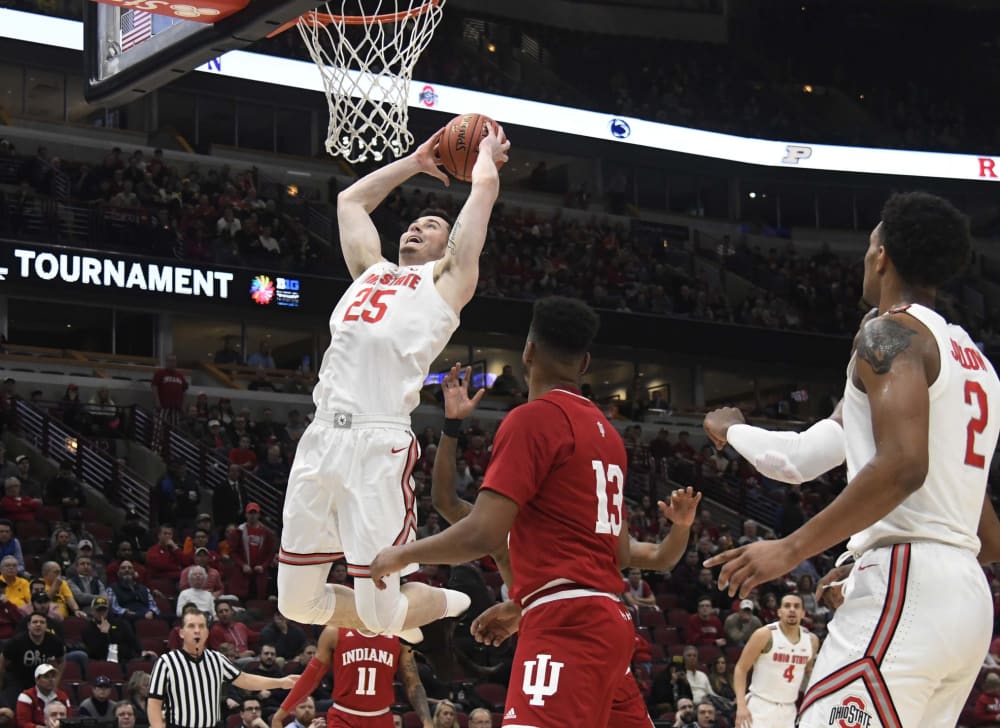 Ohio State played with energy on both ends of the floor in the battle against Indiana. (David Banks/USA TODAY Sports)

The graduate-transfer season for Keyshawn Woods didn’t work out quite the way either he or the Buckeyes envisioned. It was filled with ups and downs with his jumper, stints playing out of position at point guard and what seemed to be stretches where all confidence in his game at both ends vanished. But in a must-win setting against the Hoosiers, Woods showed his maturity, aggressively knocked down his looks on the offensive end and handled any role that was asked of him — just like an experienced veteran is supposed to for the Buckeyes. His perfect 5-for-5 start from the floor was eye opening and critical for an offense that doesn’t have an abundance of scorers, and it was fitting that he capped the first half with a tough shot before being mobbed by teammates on the way back to the locker room. The Buckeyes might be heading home early without Woods, which is the biggest compliment he could receive at this time of the season.

The effort in at least one outing down the stretch was publicly questioned by Holtmann. But there can be absolutely no doubt that Ohio State poured everything it had into the battle with Indiana knowing what was at stake, with at least three different guys needing medical attention after losing a little blood. C.J. Jackson took a shot to the nose, Kyle Young had his mouth looked at and Kaleb Wesson needed a cleanup in the second half as well — not to mention a bit of pain that Keyshawn Woods was dealing with in his shoulder. It’s redundant to again point to the limited nature of this roster for Ohio State, but the energy and effort it played with deserves recognition either way.