The speculation, debate and conversations about Ohio State never end, and Lettermen Row is always ready to dive into the discussions. All week long, senior writer Austin Ward will field topics about the Buckeyes submitted by readers and break down anything that’s on the minds of the Best Damn Fans in the Land. Have a question that needs to be tackled, like the one today about Ohio State and how the end of spring camp will impact the secondary? Send it in right here — and check back daily for the answers.

The jolt of energy was evident right away in the first practice back for Kerry Coombs at Ohio State.

He has been in the reloading situation before with the Buckeyes, and there was no mistaking either his urgency or enjoyment as he dove into the challenge with a secondary that was in the spotlight. It was going to be a huge spring with three open jobs in the starting lineup, a critical moment in the careers of some guys a couple years into the program and a major opportunity for Coombs to begin molding the talent on hand.

Then, just like that, it was gone after three practices.

No more reps for Sevyn Banks to show that he’s ready to be a lockdown cornerback. No snaps for Tyreke Johnson to begin tapping into his five-star potential with the position coach he originally committed to back at Ohio State. No more passes to intercept as Marcus Hooker tried to prove he could be a complementary safety for projected starter Josh Proctor.

Spring practices are invaluable for the Buckeyes, so there’s no question that losing 12 of them is a blow. But there might be a scenario that could actually work in their favor depending on what exactly happens over the next couple months with the coronavirus and how much time the NCAA decides to give back to college football programs before training camp. 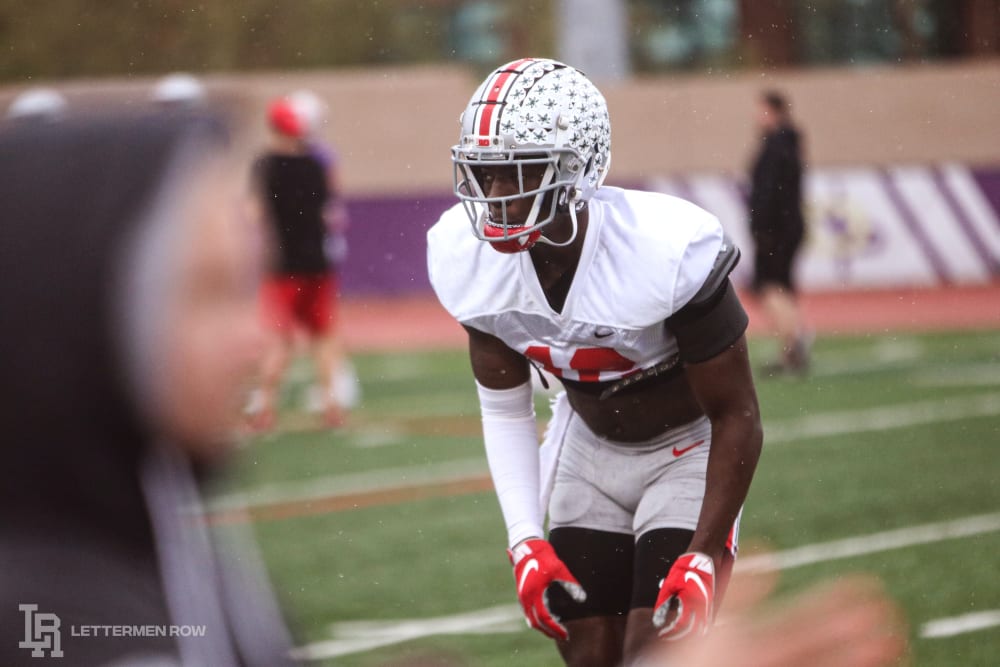 Ohio State cornerback Sevyn Banks was looking to have a big spring for the Buckeyes. (Birm/Lettermen Row)

There is absolutely no certainty about what will happen from here, of course. But one possible solution that has been floated to ensure that student-athletes are ready for the physical demands of the sport by September is allowing for more organized summer workouts — potentially even with a few of the spring practices that were missed in March and April being allowed in June or July. That’s yet another tricky issue for the sport’s governing body to tackle, because not everybody missed the same amount of workouts this spring. But unexpectedly having them pushed back to the summer could wind up being a benefit for the Buckeyes.

If summer camp becomes a reality for Ohio State, there’s a chance that potential starting cornerback Cameron Brown would no longer be limited like he was this month. Proctor might be fully cleared to resume activities after what was believed to be offseason surgery following a shoulder issue that bothered him last season. Shaun Wade surely doesn’t need the reps, but a schedule that more closely resembles NFL organized team activities before training camp could be perfect for somebody who easily could have already become a professional.

For Coombs, having the full complement of defensive backs would surely make life easier for him as he works to reload that unit. It might also make for smoother development process if there’s no extended gap like the typical one between spring practice and training camp, allowing the Buckeyes to ramp up and build toward the season without interruption. There’s obviously no certainty that’s what will happen, but it’s at least a significant silver lining if it works out that way.

There’s still no reason to worry about the Ohio State secondary this season given the talent on hand, the return of Kerry Coombs to lead the group and the defense will still have a dominant pass rush around to help. For now, though, the Buckeyes are dealing with a setback in the growth process — but not one they won’t be able to overcome.