Buckeyes offensive line depth showed up big -- must now do it again
Aritcle written by:

EAST LANSING, Mich. â€” No one was going to feel sorry for Ohio State.

There would be no free passes if the Buckeyes, down three offensive line starters on Saturday at Michigan State, didn’t leave Spartan Stadium with a win.

It’s been said here and everywhere else a million times — but in 2020, every win is a good win. The Buckeyes have had a few ugly wins already this season and probably would’ve been excused if they’d pulled out another one against Michigan State.

Instead Ohio State put together what was probably its most complete performance of the year. It couldn’t have happened without its offensive line stepping up and making the most out of the rampant absurdity that this year has been chock full of since March.

The credit needs to go first to the young players making the adjustments they needed to make, but there’s no doubt that position coach Greg Studrawa and assistant line coach Kennedy Cook had the toughest task in a week full of them for the Buckeyes. It’s impossible to replace Josh Myers, Thayer Munford and Nick Petit-Frere flawlessly, and doing so on short notice makes the task even taller. Still, Ohio State amassed more than 500 yards of offense — including 322 on the ground — against the Spartans when the potential for chaos was greater than ever.

“Coach Stud, Greg did a great job all week,” Ryan Day, speaking to the media from his home on Saturday, said. “I thought, watching it, just from again watching in the way I watched it, I thought they battled. Was it perfect? I’m sure it wasn’t perfect. But they did, they battled.

“Having really one guy play the same position they played in the last game, and that was Wyatt [Davis]. Harry [Miller] had to move. Some guys were in their first start, Max [Wray], Matt [Jones], Dawand Jones, and I saw Enokk [Vimahi] in there. It was just great to see those guys battling in there.” 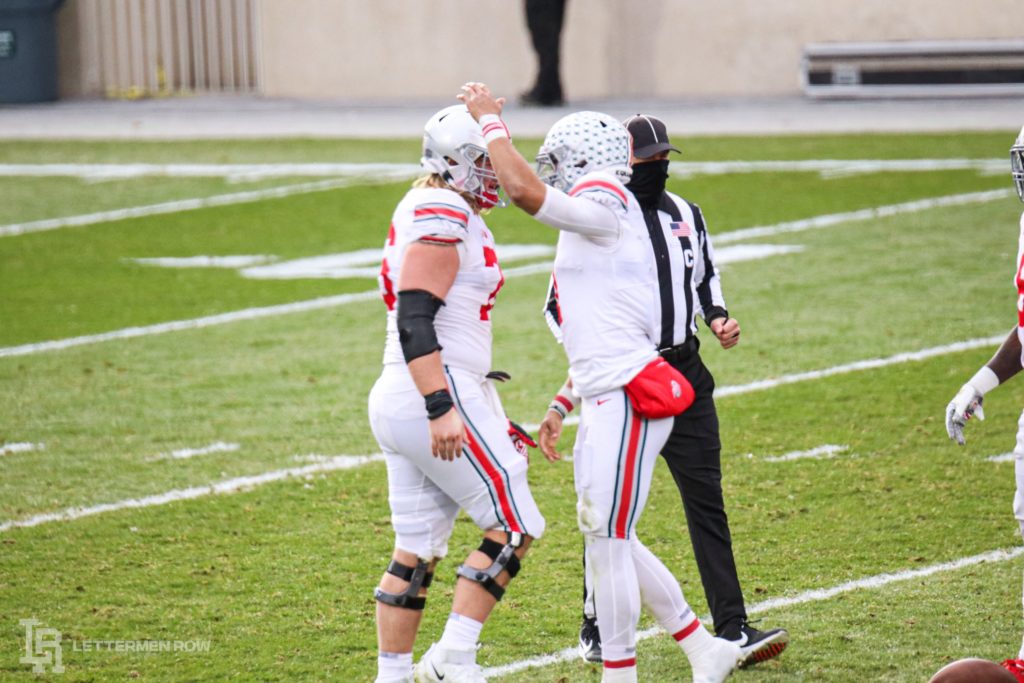 It definitely was not perfect, to clarify. The Buckeyes averaged more than six yards per carry but were buoyed by three runs of over 40 yards, meaning that the other 45 carries were for less than four yards per tote. Harry Miller’s move into the apex of the Buckeyes offense wasn’t perfect, and he struggled in a big way to get the shotgun snap to Justin Fields with any consistency. His backup, true freshman Luke Wypler fired one over Jack Miller’s head, leading to a safety. Fields was sacked three times, and if he wasn’t close to superhuman that number probably would’ve gone up.

The battle that took place against Michigan State probably wouldn’t have beaten Alabama or Clemson. But the Buckeyes were not shorthanded because of injuries, and they should be back to full strength on the offensive line by the time they would suit up against the Crimson Tide or the Tigers. Saturday’s performance, imperfect as it was, provided some much-needed confidence and experience for a group of young linemen that will be tasked with permanently replacing Myers, Munford and Davis — and maybe Petit-Frere — next season.

There’s value in struggle, and the best kind of learning experience is one that comes with a 40-point road victory. Now, the next wave of uncertainty comes for Ohio State. Wyatt Davis couldn’t finish the game against the Spartans, and that could mean a fourth new starter for the Buckeyes if he’s not ready for next week — whether it be against Michigan, Maryland or someone else.

There is no room for excuses in the chase for a fourth-straight Big Ten title and another shot at the College Football Playoff.

The fight shown by the offensive line at Michigan State — and the experience gained from it — should help Ohio State be ready for whatever comes next in the rollercoaster of 2020.