TULSA, Okla. — The overachieving for Ohio State is officially done, and there won’t be another chance to exceed expectations.

The Buckeyes finally hit the ceiling on Sunday night in the second round of the NCAA Tournament, unable to spring another upset and keep on proving the skeptics wrong during what was billed all along as a transitional year for the program.

Ohio State isn’t likely to take much immediate solace in the fact that it had accomplished more than just about anybody could have reasonably predicted this season, particularly since it looked at times like it was capable of knocking off No. 3 Houston if it just could have cut down on the turnovers that have really plagued it all season. The No. 11 seed Buckeyes came up short, and for now the focus will just be on what could have been different for them after falling 74-59 at the BOK Center.

What went wrong in the loss? How could Ohio State have flipped the script? What’s next for Chris Holtmann and his program? Lettermen Row will have full coverage of the Buckeyes right here moving forward, but let’s start with Three Points on the second-round exit. 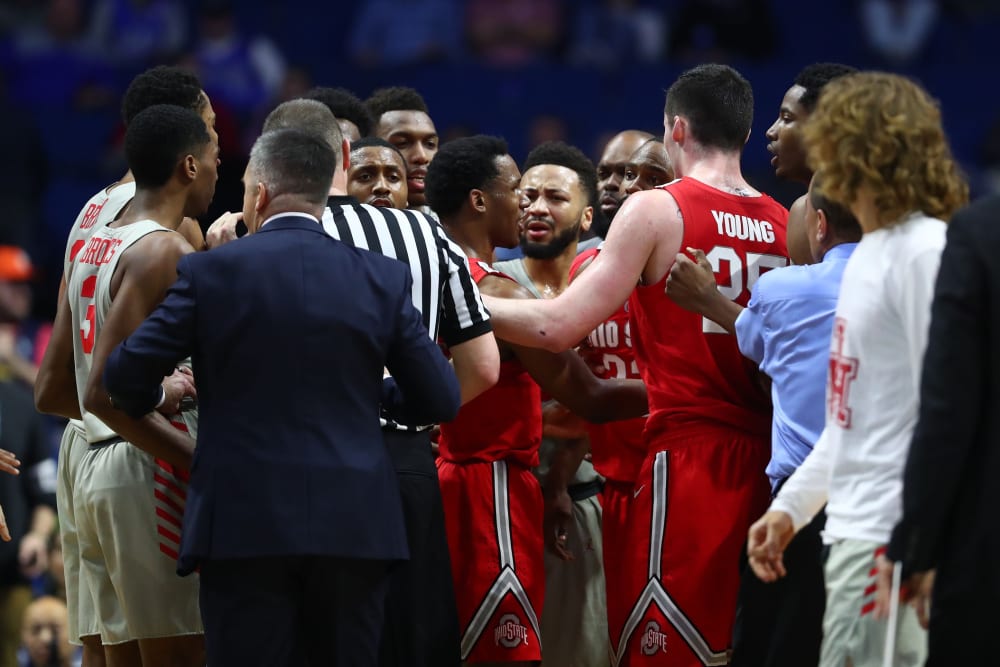 Ohio State and Houston got into a shouting match at halftime in the NCAA Tournament. (Mark J. Rebilas/USA TODAY Sports)

Buckeyes never back down

Whether it was an absurdly physical matchup in the post for Kaleb Wesson, the challenge of matching up with such a deep squad or even when physically and verbally challenged with a scrum at the end of the first half, Ohio State proved again that it won’t back down from a fight. Ideally Chris Holtmann probably wouldn’t want situations like the one that transpired with Keyshawn Woods that eventually had just about everybody on both teams involved and exchanging trash talk in a pull-apart scrum, particularly since it produced a technical foul on the senior guard. But the way the Buckeyes refused to wilt has really been a calling card all season, and it’s an admirable trait that bodes well for the future of the program.

C.J. Jackson gave Ohio State everything he had

The potential for the Buckeyes might be higher when it has a true point guard or two to run the show. But C.J. Jackson poured his heart and soul into the program while playing a position that he clearly wasn’t ideally suited for in the backcourt, and he deserves plenty of credit for the work he produced to help get Ohio State into the NCAA Tournament and nearly to the Sweet 16. Without his production on offense against Houston, the Buckeyes would have been in a world of trouble. And as his career comes to a close, Ohio State should tip its hat to Jackson for what he did for it.

Ohio State guard C.J. Jackson did everything he could to try to pull the upset against Houston. (Mark J. Rebilas/USA TODAY Sports)

There were glimpses at a possible encore performance that lived up to the breakout in the first round from Musa Jallow. He knocked down a couple jumpers, drove aggressively to the basket and can really bounce around when going after rebounds. But his inconsistency can overshadow all of that at times, and his issues with turnovers in the first half created problems for the Buckeyes that even a hot-shooting performance couldn’t overcome. There is clearly great potential with a guy who has his level of athleticism, and it’s important to keep in mind that he’s still young despite being a sophomore since he reclassified to enroll early for the program last year. The Buckeyes really didn’t have a choice but to try to ride through the ups and downs since Jallow has proven to be such a capable defender, and this offseason could be critical for him to take the next step.