COLUMBUS — The days of worrying if the Ohio State depth would hold up on the offensive line are long gone.

The standard has been raised by the Buckeyes in the trenches. And now they go into the season trying to prove they are the best unit in the country, not just one that needs a little good luck to keep the Big Ten champions rolling.

Ohio State does have some intrigue as it tries to replace two starters. But bringing back three surefire NFL Draft picks is a pretty impressive foundation, and the program also has a handful of some of the nation’s most coveted recruits waiting in the wings for a group that might be as well-stocked and versatile as the program has seen in quite some time.

“As an offensive line unit, we were taking huge steps this spring,â€ Ohio State center Josh Myers said. “Even just through the first week, through the first few practices, our young guys were taking huge steps. I could tell that we have some young guys that were going to get better this spring. I think the competition for those two spots, there isnâ€™t a clear-cut answer as to whoâ€™s going to start. I think the competition of that was driving all of them so far striving for that spot.

“They were getting better and it was fun to watch. As to who will start, I donâ€™t think any of us know right now, but time will tell.”

Myers has one job locked down in the middle, and he’s flanked by projected first-round pick Wyatt Davis at right guard and multi-year starter Thayer Munford at left tackle. Those are the givens, so as Offensive Line Week begins at Lettermen Row, it’s time to dig into the looming questions. 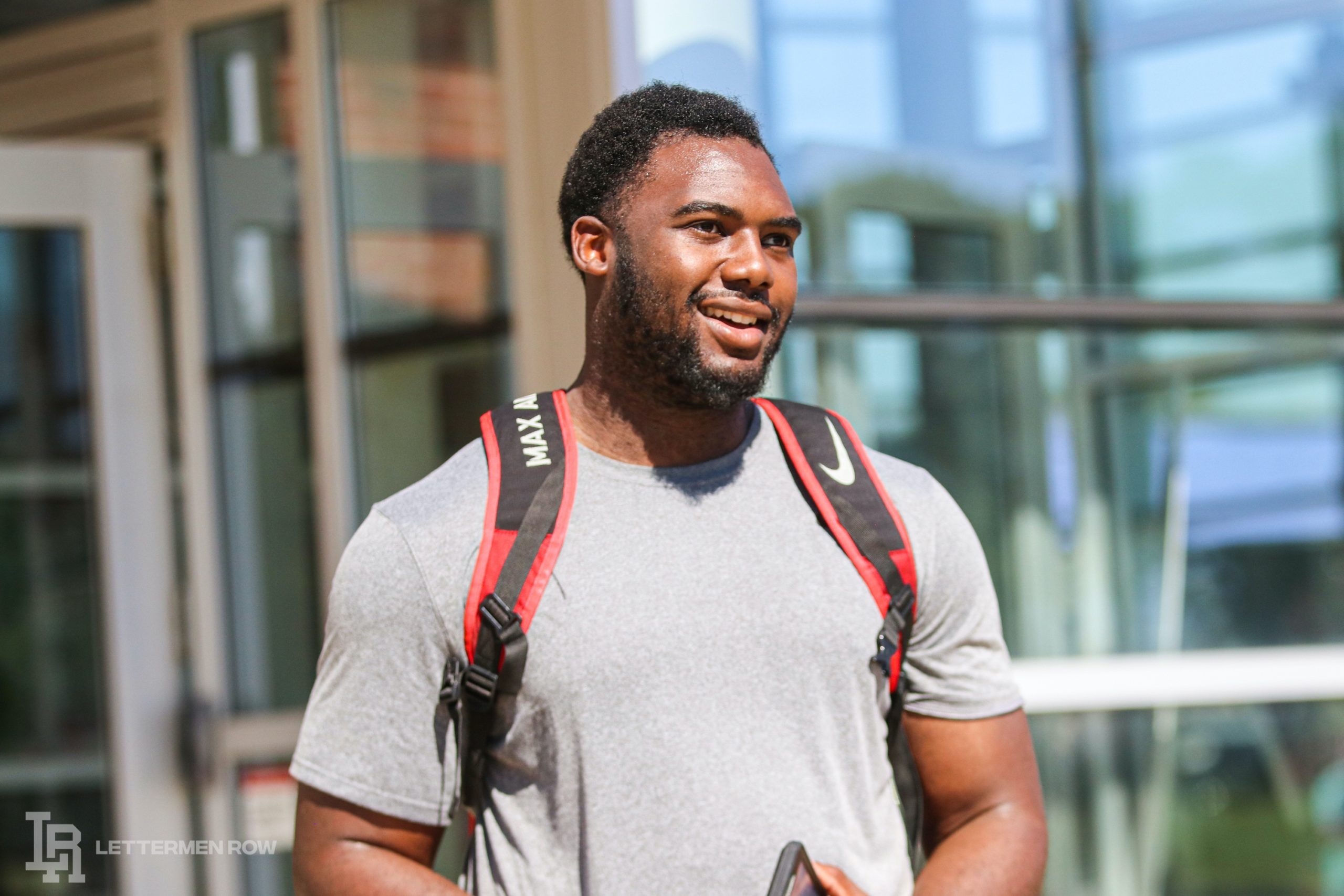 Is Nicholas Petit-Frere ready for his shot?

The potential has always been clear or Nicholas Petit-Frere wouldn’t have arrived as the top-ranked tackle in his recruiting class. But the clock is now ticking for him to deliver on that promise and become the kind of cornerstone the Buckeyes envisioned when they signed him.

Petit-Frere has needed a couple years to keep filling out physically, a process that’s included a lot of calories and plenty of work in the weight room. After two seasons working with strength coach Mickey Marotti to get bigger, two years of education under position coach Greg Studrawa and two years of competing for reps, Petit-Frere should be poised to take the next step for the Buckeyes. Certainly this isn’t a true make-or-break moment for his career, but there is only more competition coming as Ohio State keeps stockpiling recruits, and Petit-Frere needs to make the most of his shot at right tackle when training camp opens.

The blueprint is so clearly laid out for Harry Miller that it occasionally seems like a foregone conclusion that he’ll win the vacant job at left guard this year before sliding over to replace Josh Myers at center next season on the way to the NFL Draft. And, yes, that’s probably a decent bet considering Miller’s rare blend of athleticism, sharp technique and inquisitive mind.

The battle for the spot is actually going to be more heated than it tends to get credit for as Enokk Vimahi, Gavin Cupp and Matthew Jones lead the charge to try to keep Miller out of the starting lineup. Miller is the odds-on favorite for a reason, of course, and he was already staking his claim to the role during the abbreviated spring camp as he was getting first-team reps right out of the chute. But the sophomore has still never been in this position before, and he’s going to have to earn his stripes before September. 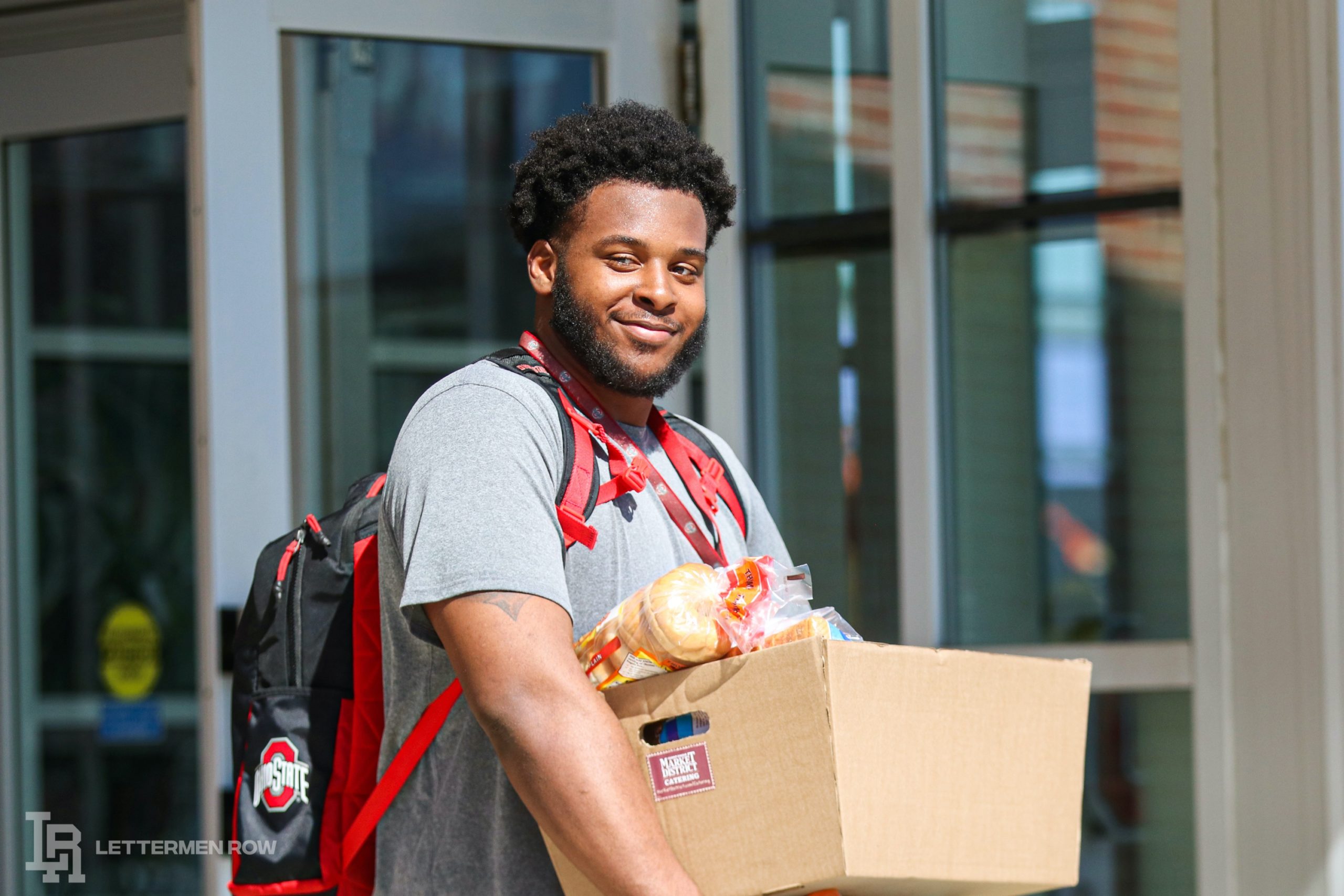 Will Thayer Munford return to top form for Buckeyes?

Thayer Munford has rarely been fully comfortable physically over the last couple seasons, and that did show up with a few performances last year that he knows didn’t meet the expectations at left tackle. The veteran wasn’t playing at a level that posed enough problems that Ohio State needed to take him out of the lineup, but it was still clear that the nagging injuries were taking a toll and keeping him from playing like the potential early-round pick that was projected at this time last year.

So, Munford is back for another season to prove himself for the next level and another shot to win a national championship. And while the layoff during the spring probably wasn’t ideal for anybody, it’s possible that the senior might have benefited from a bit of down time to get recharged and rejuvenated for his final season in the Ohio State lineup. When Munford is completely healthy, he’s one of the best tackles in the country — and he’ll be hungry to prove that.

If he had national name recognition going into last season, Josh Myers might already have a Rimington Trophy on his resumÃ©. But he won’t be overlooked this time around after establishing himself as one of the nation’s best centers in his first Â year as a starter, blowing away scouts in the process and setting the table for him to be a first-round pick next spring.

Myers has become an invaluable leader, he’s improved as a pass-blocker and his snapping was just about flawless last year for the Buckeyes. Now he’s got the benefit of a full year of experience and more time to develop physically, and Ohio State really couldn’t ask more from the man in the middle of the offensive line. Claiming national awards obviously isn’t easy, but Myers should be squarely in the mix to give Ohio State another Rimington winner.

How much impact will Paris Johnson have for Ohio State?

Generally it’s not a positive sign if a program is plugging a true freshman into the lineup on the offensive line. But there are always exceptions to the rule, and Paris Johnson might just fit the bill.

The top-ranked tackle in the country was already turning heads during the shortened spring camp after his early enrollment, and it hasn’t taken long for some folks inside the Woody Hayes Athletic Center to pin three-and-out expectations on a guy who looks like a generational prospect. Now, those sky-high expectations might not really be fair to a first-year player given how difficult the transition to playing at the college level on the offensive line can be — a task that’s even taller for a national-title contender with another former No. 1 recruit competing at his position. Johnson is absolutely going to get snaps this season for the Buckeyes, but it’s too early to know for sure how much he can help right away.