Stay in touch or be left out because Ohio State recruiting is a 24-hour, seven-day-per-week obsession. What’s the latest news as the Buckeyes build for the future? Get that and more Sunday through Thursday on Lettermen Row. Today’s update checks in on a pair of Michigan’s top sophomore prospects and updates the Buckeyes recruitment of two 2020 tight ends.

On Monday, we introduced you to the fifth-ranked tight end prospect in the Class of 2020, Canada’s Theo Johnson.

Johnson acquitted himself nicely throughout the day and looks the part of a Big Ten tight end at 6-foot-5, 240-pounds. The Holy Names High School (Windsor) standout is a 4-star prospect ranked as the fifth-best tight end prospect in the Class of 2020 â€” and it was obvious why on Sunday.

Monday, Johnson was at Ohio State. And as predicted, he left campus with a scholarship offer from the Buckeyes in hand.

Grateful to receive an offer from THE Ohio State University #GoBucks pic.twitter.com/WJQiScUDE4

“I was there until about 5:30 p.m. on Monday,” Johnson told Lettermen Row. “Ryan Day told me I had the offer, [tight ends coach Kevin] Wilson said that he couldâ€™ve offered me over a month ago over the phone but he wanted it to come from Coach Day in person so it would have hopefully a little more meaning.”

The offer from Ohio State is the 21st for Johnson. He was impressed with his first meeting with Day, and the practice atmosphere really stood out to him.

“I got to sit down with Coach Day at the end of my visit,” he said. “My initial impression of him is that he seemed very calm and direct. I wasnâ€™t around him enough one-on-one to be able to have a true opinion on him as a head coach aside from that.

“But the best part about the visit was getting to see the practice and how they go about things. The intensity was always very high that really stood out to me.”

This trip to Columbus was the second for Johnson, who camped with Ohio State last summer. There could be a need for a return trip once more for the Canadian prospect and his family in order to get a more comprehensive view of everything the Buckeyes have to offer.

“My mom and I both felt that they had a ton of support for the players,” Johnson said. “We didnâ€™t get to see the entire academic side of things, but we sat through a brief academic presentation during the visit as well.”

After breaking his ankle at the end of his sophomore season, the country’s fourth-ranked 2021 running back was back in action on Sunday afternoon at The Opening regional in Massillon and looked like his former self.

“I’ve been working on the track a little bit, but [The Opening] was the most extreme football thing I’ve done since the injury,” Donovan Edwards told Lettermen Row. “It held up good.”

The West Bloomfield (Mich.) 4-star running back showed up to the camp wearing Ohio State gloves. No, clothing doesn’t matter much, but there’s no doubt EdwardsÂ is a fan of the Buckeyes. He visited the school on Monday as part of a large bus tour and has been doing his best to stay in contact with them. 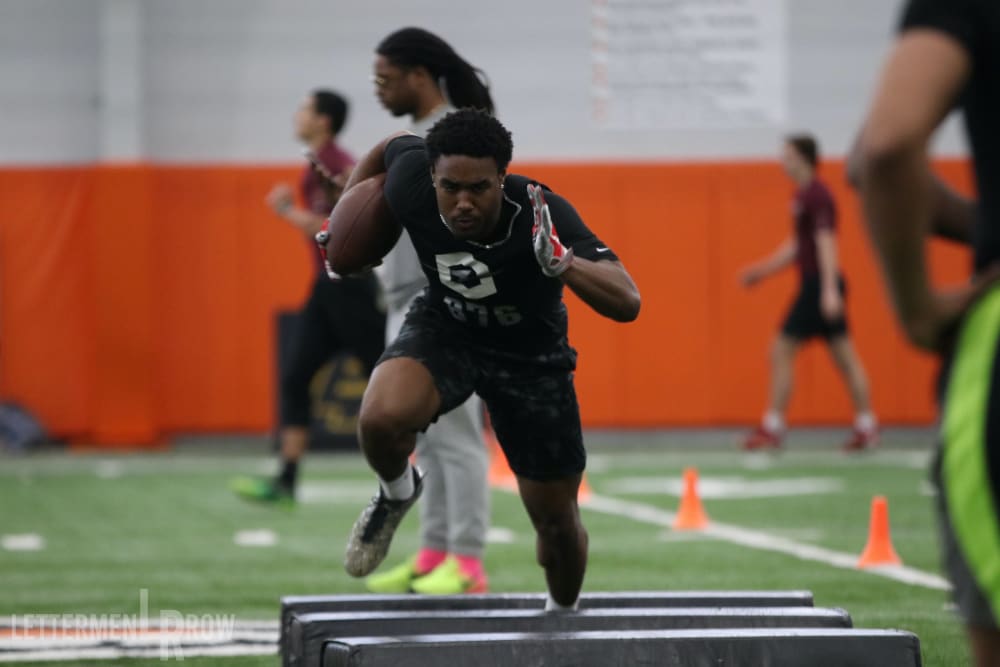 Donovan Edwards is one of the Buckeyes top 2021 running back targets. (Birm/Lettermen Row)

“I’d been talking to Coach Taver Johnson before he left for the Raiders,” Edwards saaid. “But now I’m talking to Tony Alford like once every other week. I’ve been talking to Ryan Day, too. I’ve felt the love for sure from Coach Alford and Coach Day, for sure.

“I like the way they show all their players love. If you’re a 5-star or a walk-on, they show you love. I’ve already seen everything I need to see from Ohio State to be honest.”

Belleville (Mich.) 2021 defensive tackle Damon Payne is on the same bus tour as Edwards, so he checked out Ohio State on Monday as well. On Sunday, the 6-foot-4, 275-pound lineman earned the title of MVP among the defensive linemen after a dominating performance against each and every offensive lineman he faced.

A probable top-100 player in the Class of 2021, Payne talked a little bit about his recruitment and where things stand right now. As expected with so much time before a decision needs to be made, he’s trying to sort out all of his options — and he already has 20 offers.

“I’m pretty much an open book,” Payne said. “Whoever likes me, I like them. I’m just trying to go to school. I like a lot of schools.”

“I talked to [the Ohio State coaches] a few times, Greg Mattison when he was at Michigan and a little bit since he’s been at Ohio State — and Larry Johnson. It’s a little weird because [Mattison] was at Michigan, but I’ve learned that coaches can be here today and gone tomorrow.”

Despite his lone crystal ball prediction being in Ohio State’s favor, Payne doesn’t have a favorite.

“I’m just looking for a place that feels like home,” he said. “My father has been hard on me to keep me going, I need a school like that.”

Jordan Morant has Buckeyes in top 10

The Buckeyes are still in the mix for one of the country’s premier defensive backs.

That is Bergen Catholic (Oradell, N.J.) 4-star safety Jordan Morant, the country’s top-ranked safety according toÂ 247Sports.com.Â The 6-foot-1, 195-pound safety will visit Michigan on Friday before heading to Columbus for a Saturday visit with the Buckeyes.

Grandview Heights 3-star tight end Luke Lachey was back on campus with the Buckeyes on Wednesday morning, his third trip to the school this spring.

“The visit was to get some one-on-one coaching from [Buckeyes tight ends coach Kevin] Wilson,” Lachey told Lettermen Row. “I got there around 7:00 a.m. to be in all the meetings.”

There is still no timetable for a decision for the 6-foot-6, 215-pound Lachey, and that’s a good thing for Ohio State. The Buckeyes asked him to return to again to the school for a camp visit this summer.

“Iâ€™m going to be working on all the things they told me I should work on,” he said. “They want me to come back for a camp.Â They have been on me a lot about getting there and wanting to spend time with them.”

Lachey has almost 20 offers, including opportunities from Wisconsin, Michigan State, West Virginia and Rutgers among them.