COLUMBUS — Elusiveness is a trait that Ohio State looks for in a running back, sure.

But the moves shown by Bijan Robinson and Jaylan Knighton in the days before they made their college decisions?Â That was next level-ready stuff.

Both Robinson, a 5-star running back from Tucson, Ariz. and Knighton, a highly-regarded 4-star prospect from Deerfield Beach, Fla. had offered up private commitments to the Ohio State coaching staff and were just waiting for their day to announce it, according to sources familiar with the decisions.

But out of nowhere and still without what anyone at Ohio State feels is a real explanation,Â things changed quicker than a J.K. Dobbins jumpcut. Just like that, the Buckeyes are back to the drawing board and trying to wrap up their offensive recruiting in the Class of 2020.

So how big is the board? Who is on it? Those questions are the biggest remaining questions in this recruiting class, and Lettermen Row is looking at some possibilities when it comes to what’s next.

Yes, Bijan Robinson and Jaylan Knighton should still be pursued, primarily because those players clearly felt pretty good about the Buckeyes. AndÂ if something goes wrong at Texas or Florida State, then there’s at least a chance to right the proverbial ship through continued relationship-building and trust acquisition.

But there are other running backs committed elsewhere who are worth chasing, too. I’m not going to include Kendall Milton on this list, even though it seems Georgia is likely to complement him with fellow 5-star prospect Zachary Evans. I just personally don’t see Milton flipping from the Bulldogs no matter who joins him in their class.

I will, though, include South Carolina commit Marshawn Lloyd as a player who makes a lot of sense for Ohio State to try to reconnect with. He’s built like a J.K. Dobbins clone. He’s from an area that has been traditionally friendly to the Buckeyes — he comes from Chase Young’s alma mater, DeMatha Catholic in Maryland. And he’s also really good at running the football.

Maryland is also hoping to flip him and they have some real inside connections after hiring former DeMatha head coach Elijah Brooks in the offseason. But Lloyd is good enough to deserve some attention. 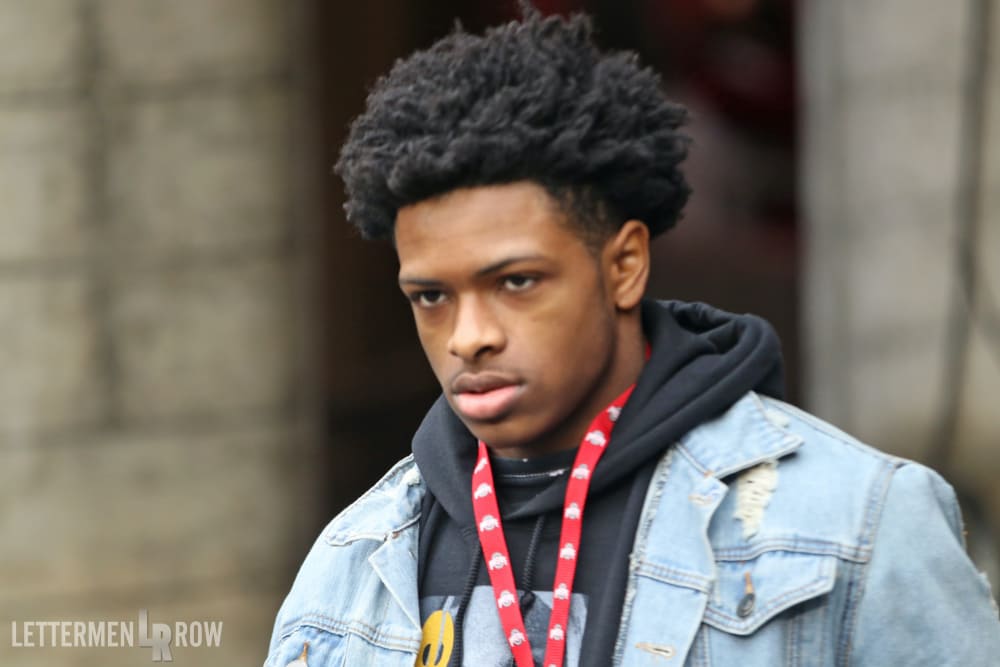 Ohio State has reached out again to Deamonte Trayanum, who is committed to Arizona State. (Birm/Lettermen Row)

Ohio State has been in some recent, limited contact with Akron Archbishop Hoban 4-star Deamonte Trayanum, but I don’t think that the Arizona State verbal is going to consider a flip without some real assurances that he’s a running back in the Buckeyes eyes. I don’t know he receives that message if he’s not believed it to this point.

The timing of the announcements from Bijan Robinson and Jaylan Knighton were particularly bad for Ohio State because they came right on the heels of fall camp starting in Columbus. It was at a time when the Buckeyes were unable to bring other tailbacks into town for a second look.

That includes players like Dublin Coffman athlete Mike Drennen, Dallas running back E.J. Smith, Kentucky commits Jutahn McClain and Torrance Davis, Iowa State verbal Miyan Williams and others. New Jersey athlete Jalen Berger, a talented running back who has visited and has a solid relationship with Alford, is also on this list.

Now, with the Ohio State season weeks away from starting and the senior years of the aforementioned tailbacks upon us, the recruiting process is going to slow down. The Buckeyes have no real option but to take advantage of it by using the extra time to look closer at these players.

Whether or not E.J. Smith can be an everydown back in the Big Ten is a major piece of his recruiting puzzle. (Birm/Lettermen Row)

For some, like Drennen, Berger and E.J. Smith, it’s about double-checking and seeing if they can be every-down running backs or if they’re more situational, slot-type guys. For others, it’s about whether or not they are handling their business off the field while growing on it.

The Buckeyes have time on their side and there will not be an overreaction to the stunning defeat dealt by Robinson/Knighton that includes reaching for a player or person who doesn’t fit the Ohio State culture or doesn’t have the talent to fit the offensive scheme.

Tony Alford, Ohio State will find new names to bring into the fold

This has already begun with the recent offer to Texas 4-star running back Kevontre Bradford. It’s clear with how quickly that offer went out that Tony Alford, Mark Pantoni and Ohio State have continued to watch players around the country, looking for diamonds in the rough if something were to happen that forced a deviation from their original plan.

Two players that I personally really like are Louisiana’s Kyle Edwards and Florida 4-star Keyvone Lee. Both uncommitted at present, Edwards and Lee are bigger guys who are going to pack a punch in between the tackles and may not have the top gear Ohio State usually desires. But the tape is pretty good on both players.

I’m also a big fan of California 4-star back Daniyel Ngata. The country’s second-ranked all-purpose back is reportedly very high on Texas A&M, so leaving the West Coast isn’t a problem. And with recent Ohio State successes in California and the expanding national footprint of the program, I think he’s a player worth contacting.

I know nothing about Ngata other than what I’ve seen on film, but the tape is special. After collecting dozens of touchdowns on the ground and in the passing game in the last two seasons, he seems versatile enough to fit what the Buckeyes like.