Have a question about Ohio State recruiting? This is the place for you, five days a week. Submit your questions on Twitter or on the Lettermen Row forums. Check-in daily to see what’s on the mind of Buckeyes fans all over the country. Today’s question is about the Buckeyes class as it looks to replace the recruiting leadership of Dasan McCullough.

@Birm You mentioned on the last Talking Stuff that with McCullough out, Ewers needs to become a more vocal leader in Buckeyes 2022 class… Does that actually matter for recruiting? He’s the best QB in the nation

We can get to Quinn Ewers in a moment, but it’s important to note right away that Ohio State isn’t lacking for leadership in its 2022 recruiting class.

Yes, losing Dasan McCullough hurt in a big way. He’s a top-50 prospect, and that hurts. McCullough was also a real Pied Piper for the Buckeyes, and that hurts too. The newly-minted Indiana verbal played a big role in helping build the early part of the Ohio State class, working tirelessly alongside C.J. Hicks to bring others into the fold.

But let’s be clear: Just because McCullough flipped to Indiana, it doesn’t mean there’s any shortage of leaders in the 2022 Ohio State class. They go from Quinn Ewers to Kyion Grayes to Bennett Christian to Hicks and beyond. We’ve all heard the clichÃ© that birds of a feather flock together — and when kids who are natural leaders start recruiting, theyÂ usually recruit other kids who are natural leaders, even if each dude does it his own way.

Since the question in question is about the quarterback, let’s start there: Quinn Ewers is a generational talent, and if he never talked to a single recruit until signing day, he’s leading the Buckeyes class. That’s the blessing and the curse of being a quarterback.

There’s no single player who currently influences the perception of the Ohio State class than Ewers. Every recruit in the country knows Ewers. Every recruit in the country — save for other quarterbacks — is interested in playing with him. How he recruits others doesn’t matter one bit. However he wants to lead is more than enough, because he’sÂ the player everyone else is following, period.

So, no, he doesn’tÂ need to get more vocal. Also, no, it sure wouldn’t hurt if he did. 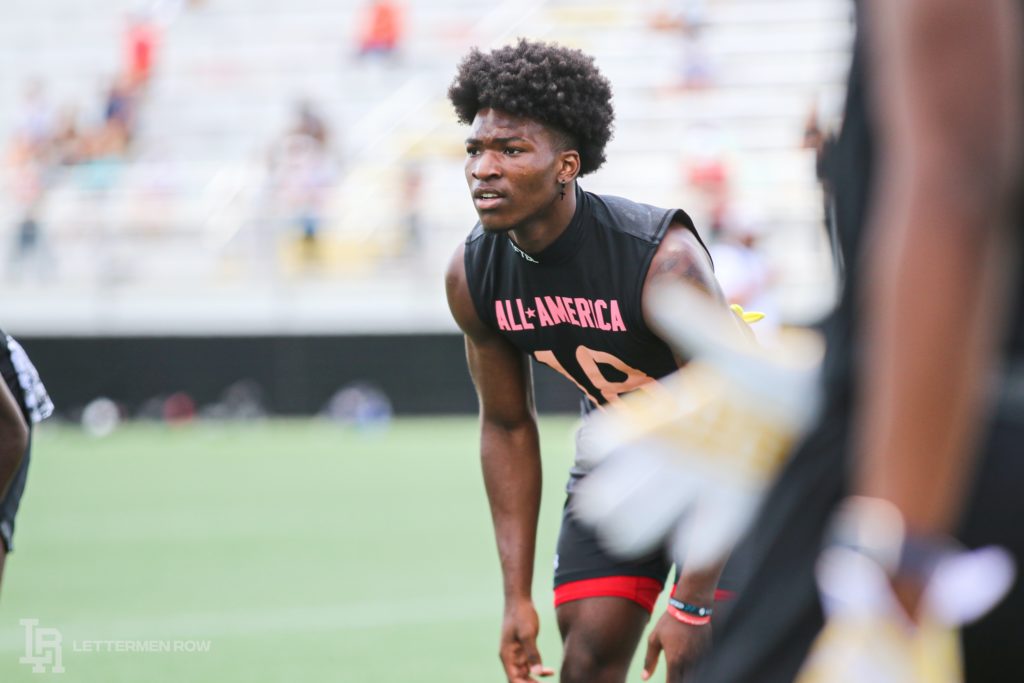 Ohio State commits like Jyaire Brown are well known, and well-liked, around the country. (Birm/Lettermen Row)

With Ewers leading the way with Hicks, a 5-star linebacker talent with almost endless charisma, that would be enough for most schools. But Ohio StateÂ is recruiting great kids that other kids love being around. J’yaire Brown may be one of the affable people I’ve personally ever covered on the recruiting trail, and the way he travels with the Louisiana Bootleggers, he’s known all the over the country.

That same can be said for Kyion Grayes, who has become the most vocal replacement for McCullough after being recruitedÂ by McCullough and Hicks. He’s Mr. 7-on-7 and has used to that avenue to get very close with top Ohio State targets like Zion Branch and Xavier Nwankpa. Grayes and Hicks have worked to become the one-two punch that Hicks and McCullough were, as evidenced by this most recent tweet.

Bennett Christian is often a forgotten man in the Ohio State recruiting class, but Benji Gosnell wouldn’t be a Buckeyes commitment without him. Now with that core group, and both recent verbals — Kye Stokes and Ryan Turner — ready to work for the Buckeyes cause, an already tight group is set to get even closer.