Stay in touch or be left out because Ohio State recruiting is a 24-hour, seven-day-per-week obsession. What’s the latest news as the Buckeyes build for the future? Get that and more Sunday through Thursday on Lettermen Row. Today’s notebook updates the recruitment of cornerback A.J. Harris and introduces Jayden Bellamy to the Class of 2022.

Ohio State can be top contender with new offer to A.J. Harris

On Wednesday afternoon, the Buckeyes became the latest team to offer Phenix City (Ala.) Glenwood School cornerback A.J. Harris. The 6-foot-2, 180-pound cornerback was a top performer at the Under Armour Camp Series and a prospect on the verge of becoming a national recruiting name. The interest from Ohio State didn’t take long to turn into an offer, one that Harris told Lettermen Row he’s been coveting.

“Me and my trainer have talked about me attending Ohio State since I was 12,” Harris said. “And for me to get a chance to live that out? It makes me speechless.”

The offer came from Kerry Coombs during a brief introductory phone call.

“It was a 10-minute conversation,” he said. “He talked about my background, academics, and if I will actually take them into consideration. He also asked what I knew about the program there and seems like a good person in general. They are very serious about getting me out there to visit and meeting my parents.

“I liked how he asked me questions about what I know about Ohio State. My dad has already said we would visit this summer, in early June.”

For the Buckeyes, offering a player from the SEC footprint doesn’t always make sense. In the case of Harris, he was born in California and comes from a military background, so the circumstances make it more viable. He spent most of his early life living in Germany. Even with that being the case, Coombs wanted to know for sure if an Ohio State offer would truly be considered. The assumption is most players from SEC country won’t leave the area.

“[Coombs] was like: ‘I heard you would, so you have to give me your word you will give us a chance,'” Harris said. “And I am going to call them weekly. That’s a school with so much tradition, I really want them to be a top school for me.”

Harris is the fourth cornerback offered by Ohio State in the Class of 2023. He is currently unranked but will enter the national rankings very highly regarded soon. 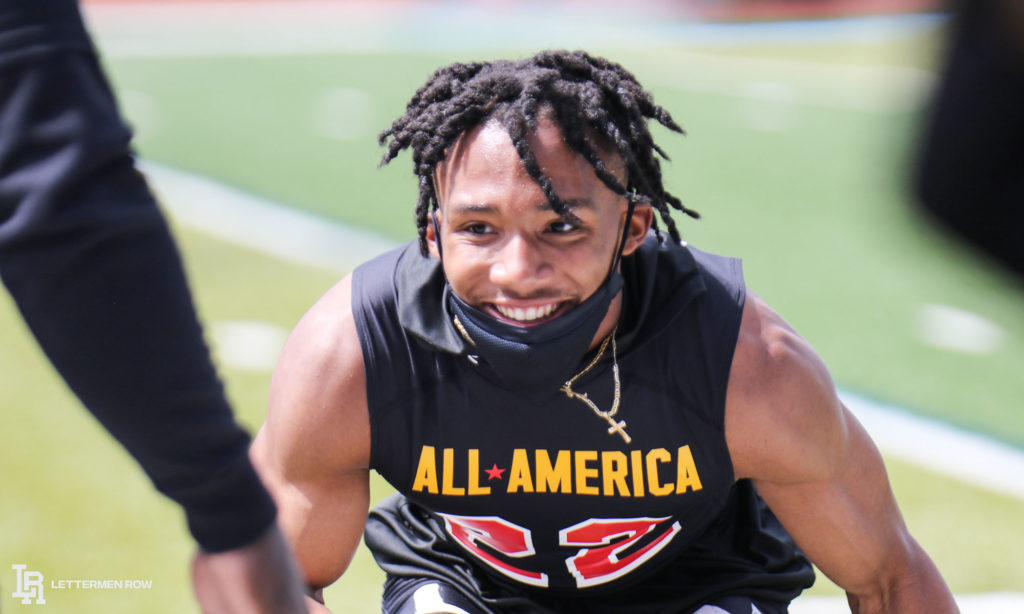 Bellamy is a 6-foot-1, 195-pound safety/cornerback who has offers from 18 other schools, including Oklahoma and Notre Dame. He’s the kind of versatile defensive back prospect that the Buckeyes like, and that’s ultimately what led to the offer from Matt Barnes this week.

“Itâ€™s a huge blessing getting an offer from Ohio State,” Bellamy told Lettermen Row. “Knowing the history with defensive backs, it’s my biggest offer yet. Conversation started first with Coach Barnes, he texted me two weeks ago and we were having a conversation then we scheduled a Zoom the in the next two weeks.

“They like my game and that they donâ€™t just see me as one position. Iâ€™m versatile and I’m aggressive with my tackling.”

Originally born in Arizona, his favorite defensive back growing up played for the Buckeyes.

“My favorite player was always Marshon Lattimore,” Bellamy said. “I’ve always rooted for him. I just like his style and the way he plays the game.”

Ohio State has a handful of big-time targets at safety, and this offer doesn’t change anything with players like Xavier Nwankpa, Zion Branch, Jake Pope or anyone else. Simply put, sometimes a young player is just the right fit and earns an offer. That’s what has happened here, and now Bellamy’s name gets added to the list of players to watch moving forward. 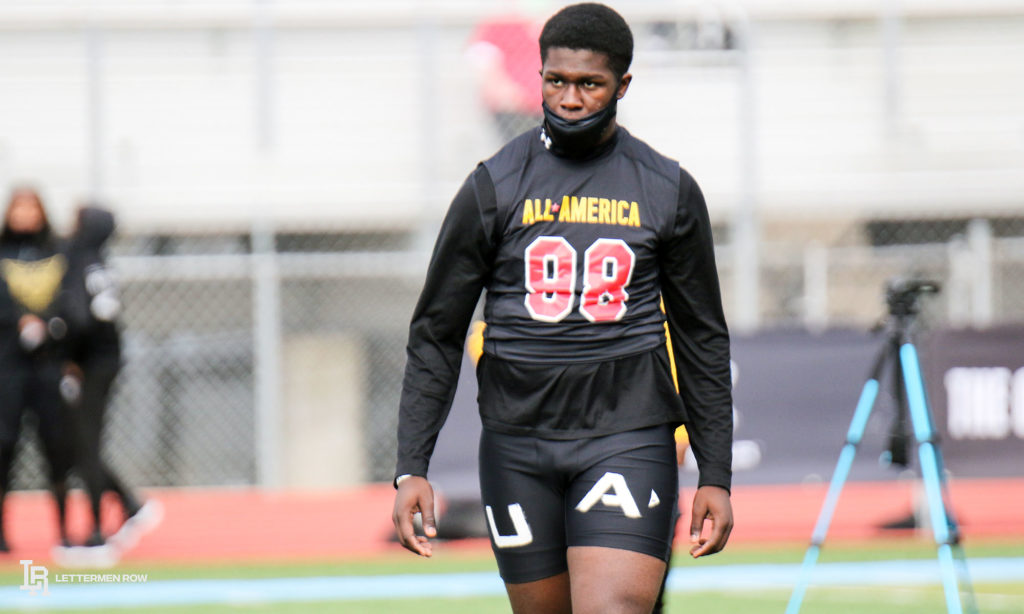 Victor Burley has an offer from Ohio State and made his first connection with Larry Johnson recently. (Birm/Lettermen Row)

Last Friday night, Ohio State offered 2023 Georgia defensive lineman Vic Burley. A 6-foot-4, 265-pound end, Burley was one of a handful of big-time prospects on hand in Atlanta on Sunday and he performed very well considering his age and the talent there. Following the event, he talked to Lettermen Row about his early interest in the Buckeyes.

“It makes me feel honored as a defensive end,” Burley said. “Look at how many defensive ends they produce and the impact they have on the game today. It makes me super happy.”

Alabama, Florida, Florida State, Georgia, Notre Dame and others have offered Burley already. Ohio State did something a little different when they reached out the first time.

“The first conversation with them was just like: ‘We want to know you and your family,'” he said. “It wasn’t about football. It was about the relationship. That was rare, really. That separated them from everybody else so far.”

Larry Johnson made the first connection with the country’s No. 7-ranked strong-side defensive end.

“He’s a Christian and a great person,” Burley said. “That impacts what I do. I’m a Christian, I go to church on Sundays. That’s an important thing for me.”

Burley hasn’t begun narrowing down his list, but he has a sense of what he’s looking for in a school.

“It’s kind of hard to think about leaving home,” he said. “But if I have to leave home for the right experience, I will. I’m looking for education and brotherhood, the family. The feeling of being in a community. Right now though I’m just trying to enjoy the process.”