COLUMBUS â€” There really was no other option for Ohio State.

If there was, then Gene Smith, Ryan Day and the rest of the Buckeyes administration would’ve done it to keep business operating as normal. But in the end, cancelling the spring football game, all scheduled recruiting visits and all off-campus recruiting as a proactive measure to combat the spread of coronavirus was the prudent, albeit incredibly difficult, decision.

“We will suspend all official and unofficial visits to our campus through April 20 while we continue to monitor and adjust to todayâ€™s changing issues,” Day said on Wednesday night. “In addition, our coaches will not recruit off campus this spring while we follow the universityâ€™s new temporary travel guidelines.”

The Ohio State decision, which came roughly two hours following Michigan’s announcement that it had suspended their recruiting efforts for the same timeframe, could have a profound impact on how a group currently ranked as the top-ranked class in the nation ultimately finishes.

To ensure a level playing field, the NCAA should require that all of its members follow the lead of the Big Ten rivals. 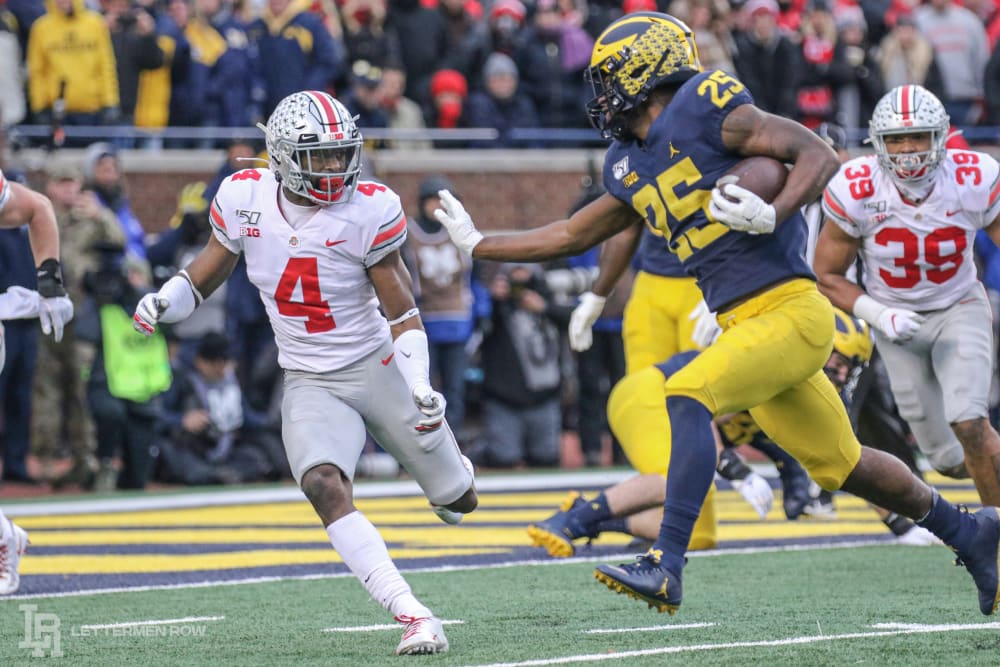 Ohio State and Michigan have halted recruiting efforts thanks to the coronavirus. (Birm/Lettermen Row)

As things are currently constructed, there’s a month-long dead period scheduled in July, as there was in February. While there are no doubt issues that would need ironing out, it should be as simple as flipping that upcoming July dead period with an impromptu dead period that would run from now into the middle of April. It’s clear that the underlying issue here is difficult to fully comprehend, but it’s easy to recognize that Michigan, Ohio State and every school that follows the lead of the Big Ten’s flagship programs will effectively be punished for their proactivity in the effort to try and stop a potentially devastating pandemic.

In order to maintain a level playing field across college football when the coronavirus outbreak is stabilized and normalcy returns, that just can’t happen. Other schools have already begun weighing the possibility of a similar pause on the recruiting trail, including Oklahoma, which will no doubt be forced to respond as two NBA teams found themselves quarantined in Oklahoma City upon learning that Utah Jazz center Rudy Gobert tested positive for the virus. The NBA immediately suspended its season as a result.

With so much uncertainty about the virus and endless speculation about its spread and potential scope, college programs shouldn’t be in a position to choose their response individually.

Ohio State put off a number of January visits for recruits with the intention of bringing them in during a series of well-attended March and April weekends. Dozens of recruits were planning to make their way to Columbus in the next two weeks — and dozens more were scheduled for the now-cancelled spring game. The decision made by the Buckeyes administration in the interest of student and prospect safety will no doubt cost them valuable recruiting opportunities if the lost time isn’t able to be made up. It didn’t take long for reaction to come following Ryan Day’s tweet, and not every response was positive.

In particular, 5-star defensive lineman Tunmise Adeleye, who was slated for a multiple-day visit over the Ohio State spring game weekend, was outspoken about his frustration on social media. Fellow 5-star TreVeyon Henderson was also expected that weekend, too. Plus, 5-star receiver Emeka Egbuka was supposed to be visiting on March 28. Nearly all of the top targets on the Buckeyes recruiting board had visits scheduled to Columbus in the next month. There’s no scenario where thatÂ doesn’t negatively impact Ohio State’s 2021 class.

But the NCAA can mitigate the damage that Ohio State and others will feel in this situation. It can make sure that happens by doing the right thing and leveling playing field across the college football in the middle of this very uncertain and uneasy time. Whether or not a recruit could be upset or choose another program should be the furthest thing from the mind of college football coaches and administrators right now.

The NCAA needs to do its part and hit pause.