Stay in touch or be left out because Ohio State recruiting is a 24-hour, seven-day-per-week obsession. What’s the latest news as the Buckeyes build for the future? Get that and more Sunday through Thursday on Lettermen Row. Today’s update focuses on a pair of coaching rumors that could shape Ryan Day’s first Buckeyes staff.

Is Greg Studrawa on the verge of leaving Ohio State?

Rumor season isn’t even close to over, and it appears one coach manyÂ thought was going to remain with Ohio State could potentially be heading to a Big Ten East Division foe.

The rumor mill picked up on Tuesday night.

Something to keep an eye on…I had a source indicate that Ohio State OL coach Greg Studrawa could return to Maryland to join Mike Locksley. The two coached together there in 2014-2015 & are still good friends.

Studrawa coached two seasons at Maryland after leaving LSU in 2014 before coming to Ohio State in 2016. He worked with Urban Meyer at Bowling Green, and the Northwest Ohio native served as offensive coordinator for the Falcons from 2003-2006 after Meyer departed for Utah. A longtime college coaching veteran, Studrawa is close with new Terrapins coach Mike Locksley, and that relationship appears to be serving as the starting point for talks between the two sides.

It’s been a very up and down month for Studrawa and Ohio State, though. There were many who expected the Buckeyes to move on from Studrawa as the season ended, but in the last two weeks things appeared to have stabilized and it seemed he’d be returning to Columbus.

Now, though, speculation is rampant that Studrawa is making overtures toward Maryland after previously being in the mix for the top job at Bowling Green. Why would that be the case? Studrawa has remained on the recruiting trail in the last few months, but other Ohio State coaches have been spotted in recent weeks at places like Spring Valley High School, the home of 2019 commit Doug Nester. Some folks in that area believe it was because the assistant was leaving Ohio State — but Kevin Wilson’s visit in his place, for example, was a result of Studrawa being out of town as a child graduated college.

Assuming there is any truth to the Studrawa-to-Maryland talk, let’s evaluate the possibilities of why it could be happening:

If any of those situations turn out to be true, it doesn’t necessarily guarantee that Studrawa is going anywhere, because each scenario is contingent on MarylandÂ wanting to hire him. If there was an agreement in place between Day and Studrawa and the offensive line coach decided to reach out to another school anyway? Then we’ve got a whole different ball of yarn to unwind.

We had been fairly comfortable thinking that the entire offensive coaching staff was returning, but that’s a little less certain as of today. There’s no doubt that Ohio State is going to want to know by Friday who is on the staff and who isn’t, because recruiting in earnest begins again this weekend. 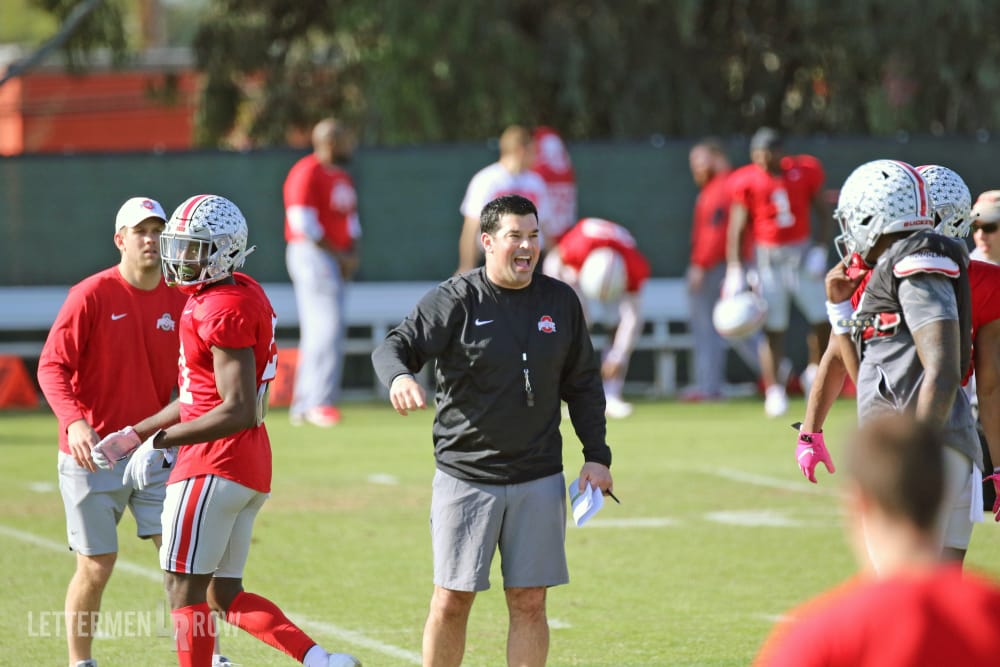 It appears LSU coach Corey Raymond has made a decision

Coaches often use the media to get a message out, sometimes directly and sometimes indirectly. I believe fully that’s what happened today when Jimmy Smith, the main voice for the LSU website on the Rivals.com network, made this announcement on Twitter.

Corey Raymond has not spoke with Ohio State regarding a job—nor have his representatives, which makes the floating rumor quite odd.

No offer. No interview. No impending decisions. No fire. No story.

Now, what message is being disseminated is as important as how it’s done. Smith is emphatic that no offer was made to Corey Raymond, and he’s probably right that no written offer was ever floated to Raymond by Ohio State. Smith is widely known as someone that is close to Raymond, and if he’s speaking for the LSU cornerbacks coach, there are a number of reasons to put an end to the rumors of his interest in a job with the Buckeyes.

The only one that really matters is that Raymond has been given the assurances he was looking for from the Tigers. He’s likely set to receive a hefty raise and contract extension that he’s been looking for, and he wanted to make sure there were no more concerns for LSU.

That’s the beauty of coaching carousel for coaches who want to explore their options but don’t want to rock the boat until a deal is in place. A majority of the dial-moving conversations neverÂ officially happen.