COLUMBUS — The three big-time 2020 prospects come from three very different parts of the country. They were united by a powerhouse program in the Midwest that was recruiting each of them to come play for Ohio State.

All the Buckeyes could really do was give them a chance to get together. From there, the bond between Jake Wray, Lejond Cavazos and Jack Miller became so strong it pulled each of them to the middle of Ohio.

And it’s there that the story begins. Eventually, it figures to shape the future of Ohio State football.

The importance of relationships

Urban Meyer leaned on an old friend, C.J. Cavazos, to help get his 2020 recruiting class started.

Meyer had known Cavazos, a former high school coach and the father of IMG Academy 4-star cornerback Lejond, since his days as a wide receiver coach at Notre Dame.

“I think [my relationship] started in the spring last year,” Lejond Cavazos told Lettermen Row. “MyÂ dad’s relationship with the staff helped, so instantly off the bat they treated me like family there. Coach Meyer and [Ohio State cornerbacks coach Taver] Johnson were always at my house when I was like 5 years old.

“But of course, I would have never thought it would turn into this.”

Something similar was blossoming down in Tennessee as well.

Jake Wray was a 4-star offensive tackle then playing at Franklin (Tenn.) High School when he visited Columbus with his family — including his brother Max, now an Ohio State freshman. Max hadn’t made his college choice yet, and in some ways, it might have actually taken him longer to decide on the Buckeyes than it would Jake.

Max, a former Georgia commitment, wound up committingÂ to the Buckeyes from his home the morning of the Ohio State spring game last year. And his presence and relationships did help his little brother fit in faster in ColumbusÂ than other prospects of his age may have,Â helped him feel confident in trying to recruit other players to Ohio State.

That part really wasn’t a problem for Jake anyway, since he’s the Wray brother considered the one who wanted to play for the Buckeyes first — even though he didn’t commit to the program until a week after the 2018 spring game.

“I was really into to Ohio State before Max,” Jake said. “I never really was a big SEC guy, but I was always interested in Big Ten. Having my brother there was great because I get a lot of inside information. And I got treated more like the players do, which was huge to me.Â  I hated being treated like a recruit. It feels fake so to me.

“Ohio State was always real with me, and at that point I was thinking ‘Iâ€™m going here, I know I am, so Iâ€™m going to recruit guys here like Iâ€™m committed — but Iâ€™m not yet.'”

That’s when Wray met Cavazos. And something just clicked.

It took no time at all for those two to decide they were going to be Buckeyes, and soon they’d start working together on a major 2020 recruiting haul.

Jack Miller had an Ohio State offer in the spring of 2017, but he’d never visited the school. His family lived in Arizona, but his father’s roots were in the heart of SEC country, helping Ole Miss become an early favorite in the chase to land him.

After a record-setting season at Scottsdale Christian, Miller transferred to Chaparral High School and was beginning to get national attention when Cavazos followed him on Twitter.

“I didnâ€™t know Lejond until we linked up on Twitter,” Miller, who committed to Ohio State on Sunday, said. “It was never just about recruiting in general. It was always: ‘Let’s talk about Ohio State.’

“Weâ€™ve been talking about going to Ohio State since. After a little bit, we didnâ€™t talk about football as much.”

Cavazos said the bond with with Wray and Miller happened instantly.

Getting comfortable at Ohio State 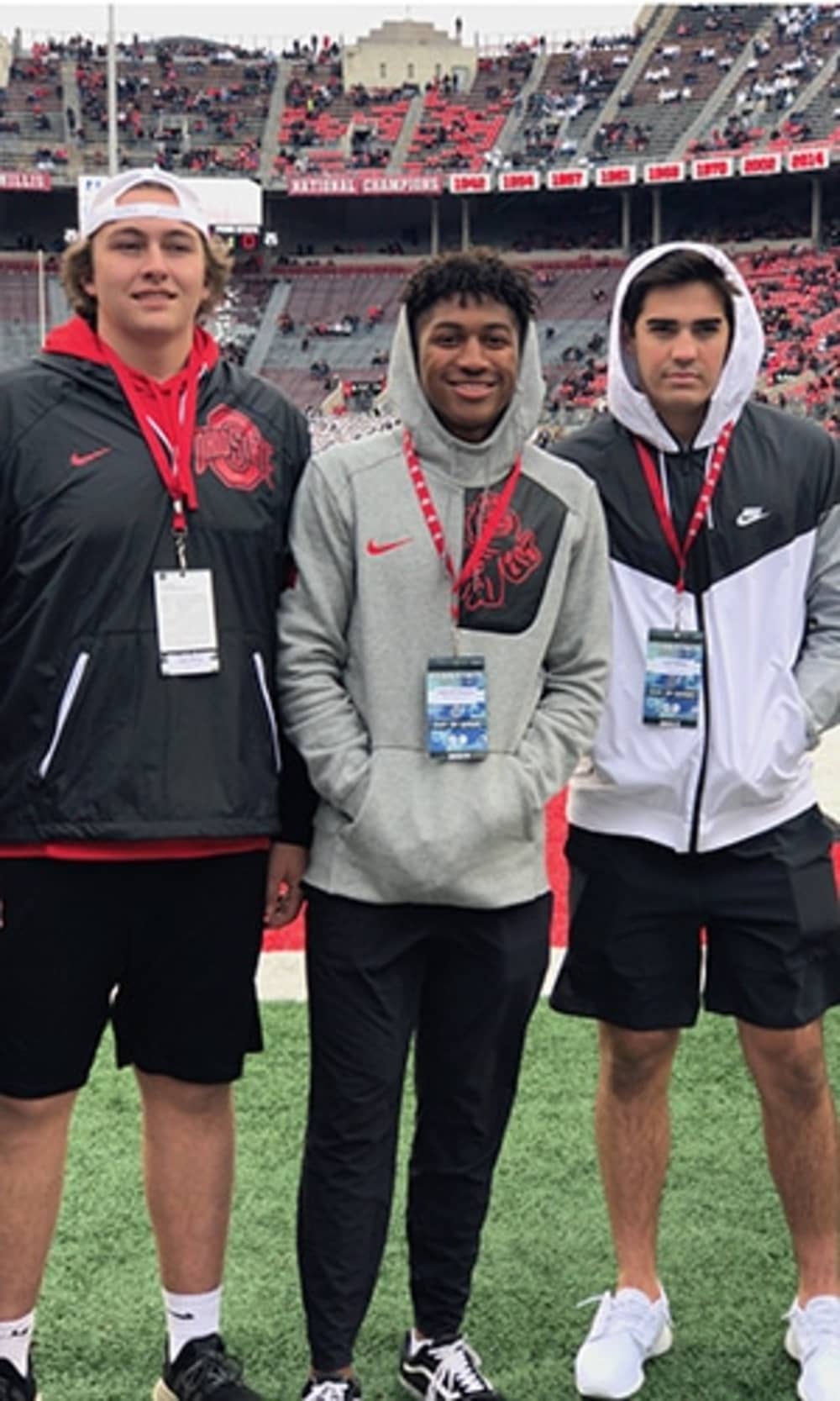 Miller had a big summer planned with visits to Florida State and Ohio State, among others. He hadn’t grown up following the Buckeyes, but he knew shortly after his first visit to Columbus its where he wanted to play his college football — perhaps even during the trip.

Cavazos and Wray could relate. Despite feeling that they had made up their minds, they made trips to other schools as well. After all, there’s never any harm for somebody who hasn’t even played a game as a high school sophomore to check out all available options.

All of them had one waiting in the Horseshoe. And the first in-person meeting between Wray, Cavazos and Miller came in October last year. The online and text message chemistry was just as obvious in person.

“The Penn State game was my first time meeting them in person,” Miller said. “I knew I wanted to play college ball with them.”

Making the visit for the massive Penn State matchup was a plan that had been many months in the making. It was one of the hottest tickets in all of sports last fall and an opportunity for three young football players to hang out, laugh and get to know each other even better.

“Lejond, Jack and me all had planned to go to a game together,” Wray said. “When it happened, it was just like an immediate connection. It felt like we have known each other for years. We drove around the campus after the game,Â tried to sneak into the stadium and had a great weekend.

Over the next few months as the relationship between them grew, so did the national expectations that each would end up committing to the Buckeyes. It wasn’t a secret how much each player liked Ohio State, but there were moments when doubt crept in, especially for Cavazos.

“Jack was never really in doubt,” Cavazos joked. “Oregon made me doubt my decision more than even Georgia did.”

“I had my doubtsÂ that he was gonna pick anywhere over Ohio State,” Miller said. “Everyone has to look around a little bit just to see what else is out there, but we all knew that it was where we wanted to go.”

Wray’s feelings on it were a bit less diplomatic.

“If I had anything to do with it,” he said, “Lejond was always going to Ohio State.”

Cavazos committed to the Ohio State coaching staff on Father’s Day, June 17, shortly after returning home from his final visit to Georgia and before he even took his trip to Oregon. His Ohio State-committed buddies didn’t have to do much, but they provided him with perspective that the two-sport athlete was looking for.

“I was considering Oregon because I’m a track guy, too,” Cavazos said. “They were just letting me know that track isnâ€™t whatâ€™s going to make me my money. Yeah, I could make someÂ money in track, but nowhere near as much as football.

“I chose Ohio State because thatâ€™s where I belong. For football, life after football and just becoming a man. I can see myself developing into my better self at Ohio State.”

The Buckeyes preach about the brotherhood of the football team at Ohio State. It starts early.

After spending a year-and-a-half talking about it, these early members of Ohio State’s 2020 class are three kids from different parts of the country who are hellbent on bringing in more elite talent to join them. None of the three commits are from Ohio, and distance from Columbus can sometimes be a factor.

But time and change is another — and these future Buckeyes are confident they can represent the Scarlet and Gray as well as any player from Ohio could.

“[Recruiting more] is not going to be hard,” Cavazos said. “I know who I’m going to get. They will clearly see what we’re building and want to join.

“And Urban Meyer is hard to say no to.”

Wray backed up that assertion.

“Meyer is impossible to say no to, in my opinion,” the 6-foot-5, 280-pound offensive tackle said. “He’s obviously one of the best college coaches ever, and he is carrying on the tradition and culture Ohio State has always prided itself on.

“Itâ€™s a place like no other. A lot of people can obviously say thatâ€™s biased, but Ohio State has a culture that is built to last.”

Miller said it’s that culture which guided him to Ohio State.

“I chose to be a Buckeye because of the great tradition and how great the people all around the program are,” he said. “I can develop as a man and a player there.”

Not surprisingly, Wray feels the same. It’s why he believes he’s made the right college choice and why he thinks others will follow this trio to Columbus.

“Ohio State builds men,” Wray said. “We aren’t trying to build a class, we are going to build the class. We have an Ohio State group chat with the guys we’re going after. We have guys we know we want, guys that fit the culture. The culture is the game, life, the way we carry ourselves on and off the field. It’sÂ the culture.

“We’re the only program in NCAA history to never have an eight-loss season. That is credit to the culture, the support, the coaches and the belief. I chose Ohio State because not only do my family and I feel itâ€™s the best place for me to play and succeed in football and in school, but it will instill greatness in all of the players that go through it. We are our own brand, and Ohio State will teach us how to build it.

“What kid in America is going to turn that down?”

Clearly not the these three commits coming from different corners of the country, a trio united by the chance to build on that tradition together.