Stay in touch or be left out because Ohio State recruiting is a 24-hour, seven-day-per-week obsession. What’s the latest news as the Buckeyes build for the future? Get that and more Sunday through Thursday on Lettermen Row. Thursday’s notebook has the latest on the potential hiring of Kerry Coombs and how the Buckeyes are working to keep themselves in the recruitment of 5-star cornerback Tony Grimes and the latest on running back Jahmyr Gibbs.

Jamhyr Gibbs official visit to Ohio State will not happen

Dialed-in readers of Lettermen Row and our recruiting coverage may have noticed a less-than-decisive tone in Thursday morning’sÂ Recruiting Question of the Day column about running back Jahmyr Gibbs and his scheduled official visit to Ohio State this weekend.

Sources close to the Buckeyes suggested following Wednesday’s press conference from Ryan Day that the concern about the scholarship numbers in Columbus could derail the planned visit from the Georgia Tech running back commitment. At that point, a decision was still being made about whether or not to go through with the official visit.

The decision was made, and Gibbs will not visit Columbus this weekend. Steve Wiltfong of 247Sports.com first reported that and Lettermen Row sources confirmed the same shortly thereafter.

With Ohio State moving forward from Gibbs, it appears any potential search for another running back is over. Now it appears the only remaining 2020 recruiting question is whether or not Cameron Martinez will sign with the Buckeyes in February or if he’ll move on to another program. Do not expect any other prospects to emerge in this cycle for Ohio State unless there’s a significant amount of unexpected attrition from here through Feb. 5. 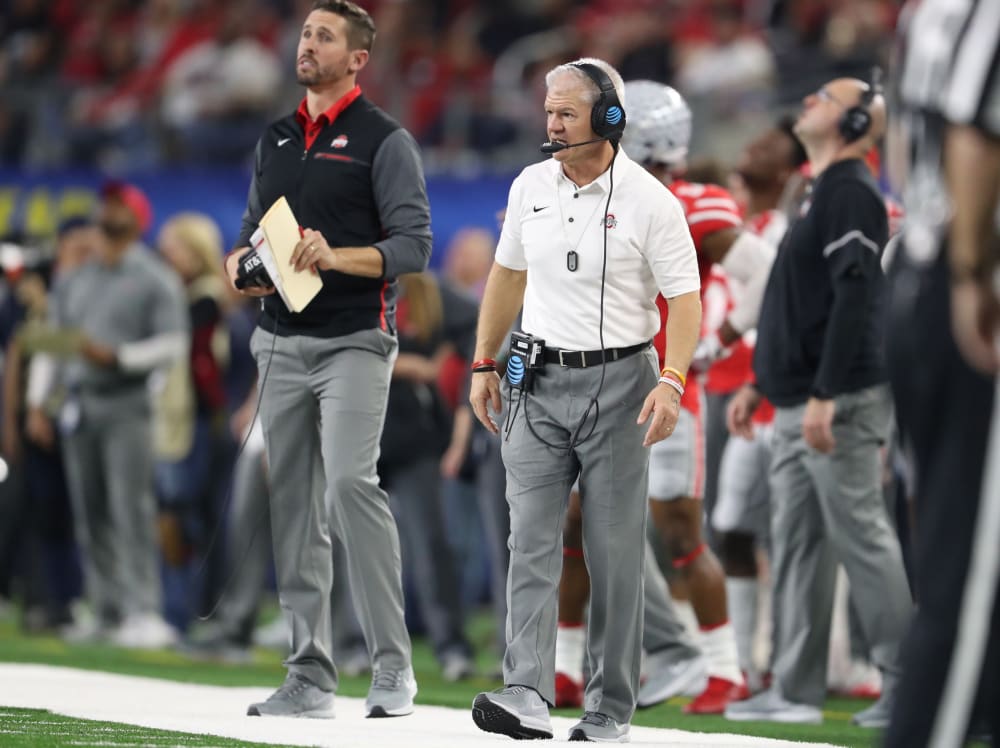 Ohio State coach Ryan Day met with media members on Wednesday and dished on a number of topics pertinent to his program. If interested, that video can be found here and is enlightening on a number of levels.

One thing Day was asked about was the status of Jeff Hafley’s replacement, and as expected, he didn’t say much about where things stand — especially when asked about Kerry Coombs specifically. Day actually bristled a little bit at the assumption that the hiring of Coombs was all but official.

“No, we haven’t hired anyone yet,” Day said. “Still going through it all. Just go from there. I’m not going to go through that right now.”

While it is Lettermen Row’s expectations that Coombs will ultimately replace Hafley, work remains to be done in order for the move to be finished. In sports, especially in college football coaching searches, things can and usually do change very quickly.

Day’s reluctance to dive into the status of Ohio State’s pursuit of Coombs is expected and smart.

One of the primary reasons that hiring a replacement for Hafley is so important for the Buckeyes is that right now recruits around the country are just not sure where to turn to for conversations with the program.

For 5-star defensive back Tony Grimes, Hafley’s departure put some space between the country’s No. 1-ranked cornerback and the Buckeyes. That doesn’t mean Ohio State isn’t still on the mind of Grimes, because it is. But there have been some doubts raised.

“Position coaches are very important to us,” Deon Glover, Grimes father, told Lettermen Row. “They are the buffers and developers of athletes right before they make their transition to the NFL. If you get an athlete and coach that donâ€™t mix, it creates an oil-and-water syndrome.

“Coach Hafley was cool, although he told us he was not leaving and then the next day we see his departure on the news. But Ohio State is still in the mix for us, very much so.”

That’s not to say Hafley intentionally misled Grimes, and the family knows that. It’s just the business of football and a reminder of how quickly things can change — a lesson that the Glover and Grimes were reminded of again recently.

“Funny thing,” Glover shared. “Now Texas A&M has lost [cornerbacks back] Maurice Linguist to the NFL and now we are in that same cycle with them. We had to put the official in April on hold.”

In recent months, Grimes has been regularly linked to Clemson, Penn State and Texas A&M more regularly than any other schools — including Ohio State. Again though, the Buckeyes are still one program they’re watching closely.

“We would have to be crazy to rule Ohio State out especially when there is such a need for defensive backs,” Glover said. “Tony could come in and get right on the field as a freshman. We didnâ€™t know the Ohio State situation yet and during [December] there was very little communication with Coach Hafley and our area recruiter and that’s when I knew something was up.

“After a while, I started to text Coach Day to see if Tony was still on their board or are they moving in a different direction. Coach Day assured us that Tony was their guy; just dealing with the season and personnel changes. Then I got a call from our area recruiter and he apologized for the lack of communication. So we’re just waiting to see where we stood and what’s happening with the defensive coordinator/defensive backs job.”

In the meantime, the conversations with Ryan Day have increased and Glover is working to arrange the next trip to Ohio State for him and his son. Day has not, however, dropped any hints about who Hafley’s replacement will be.

“We’ve been speaking a lot with Coach Day, he’s assured us not to worry,” Glover added. “Hopefully we can get back up there during spring ball. We really like coach Day. He’s a reat guy. There is a genuineness to him that very few coaches have and I have met a ton. He is official.”