Stay in touch or be left out because Ohio State recruiting is a 24-hour, seven-day-per-week obsession. What’s the latest news as the Buckeyes build for the future? Get that and more Sunday through Thursday on Lettermen Row. Tonight’s notebook has an update on linebacker Mitchell Melton and talks with Texas 2021 standout Tunmise Adeleye.

As the Wolverines were reeling in a number of commitments — right now the number appears to be 10 — speculation began that Melton, a 6-foot-3, 240-pound outside linebacker prospect, was one of them. He was not and told Lettermen Row that he couldn’t allow the energy and buzz around him in Ann Arbor to force his hand.

“Everyone has their own process,” Melton said following that visit. “I can’t be swayed into a decision by others, this is my decision.”

That also means Maryland’s 19th-ranked prospect, who has deep family ties to the state of Ohio, isn’t going to be swayed by his family’s preferences, though right now no one is trying to push him in any specific direction.

“Thankfully no [pressure],” he said. “No one has bugged me. I’m just trying to relax.”

A final decision is expected by Melton on July 3, and right now he’s almost made that pick in his mind.

“I’m pretty close,” he said. “But I’m not sure yet. Just trying to find the place that feels the most like home right now I guess.”‘

Ohio State has zero commitments from linebackers and would like to take no more than two, with Melton and Cody Simon as the only real targets on the current board. Michigan has two players committed at linebacker. Recent addition William Mohan, listed as an athlete, will play the Viper position in the Wolverines defense, a spot similar to the linebacker/safety hybrid Bullet position that the Buckeyes will deploy beginning this fall.

Chase Young is likely going to be a top-three pick in next spring’s NFL Draft. But if for some reason that doesn’t work out, the Buckeyes junior defensive end may want to look into a career as a motivational speaker.

“It exceeded my expectations, quite honestly,” Adeleye, the nation’s fifth-ranked strongside defensive end, told Lettermen Row. “You know when I heard about the tradition of the Ohio State program, I started to fall in love with it from a young age.

“But seeing everything in person and actually understanding the gravity of being an Ohio State football player and the responsibilities that entails helped reinforce how I felt about the school now that Iâ€™m older. I had a 15-minute conversation with Chase Young, and we talked about recruiting but also about what Ohio State football is all about. What it means to the city of Columbus and the state of Ohio. Being a player there is such a big responsibility and thereâ€™s so much pressure on their shoulders due to the expectations of being an elite program, year in and year out.”

The conversation with Young was different than what Adeleye has experienced elsewhere.

“That conversation — it wasnâ€™t as much surprising to me as it was eye-opening,” he said.Â  “I’ve had a lot of conversations with the elite defensive linemen at a lot of schools, but my conversation with Chase opened my eyes to how big of a deal it is to be a player at Ohio State.”

For the first visit to a school, leaving as impressed as Adeleye was is a big deal. He didn’t spend as much time as he’d have liked with his peers in the Class of 2021 however, and he joked about why before saying he’d make that more of a priority on his next trip.

“I saw Jack Sawyer, but we didnâ€™t talk that much I think all the guys were scared of me,” he joked. “People have the notion that guys from Texas live in the backwoods or something, so maybe that makes them stay away.”

The Buckeyes continue to monitor other 2020 quarterbacks as they consider the need for a second in this current cycle due to the tumultuous nature of that position room on college campuses around the country right now.

The Buckeyes didn’t get much time with Renfro during his June camp stint because of an early flight to Tallahassee, but he’d welcome a trip back to campus in Columbus if the coaches invite him. 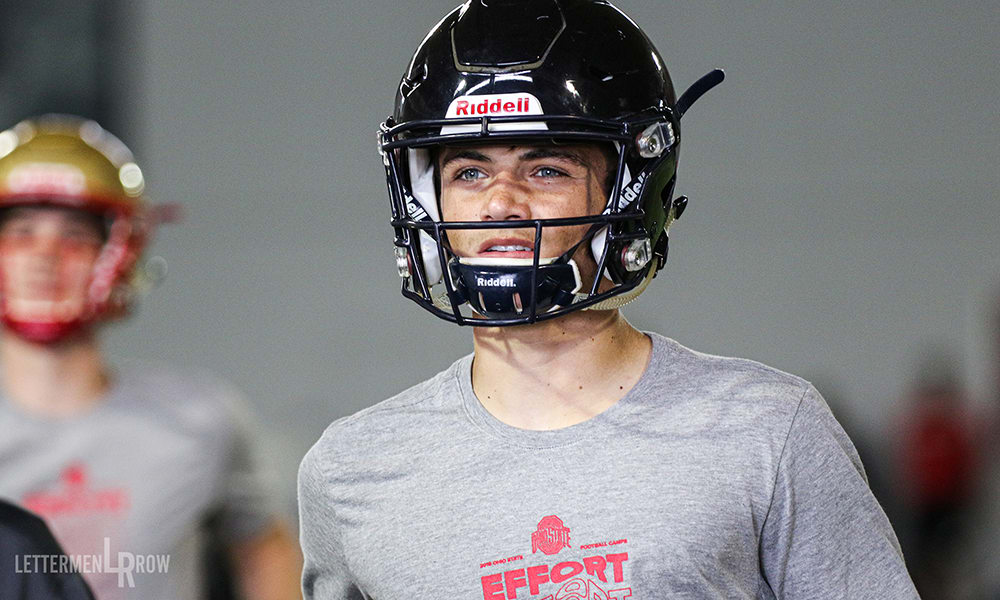 “I wish I couldâ€™ve hung around after [camp] some more, but I did get to see some facilities,” Renfro told Lettermen Row. “Just waiting to see what happens from here and get back up for a visit with the staff to actually get to tour campus.”

A big part of what happens from here, it seems, is how Buckeyes 2020 quarterback commitment Jack Miller feels about the idea of adding a second guy to the mix. Miller has talked about that with Lettermen Row before.

â€œWe havenâ€™t talked about it yet,â€ Miller told Lettermen Row in April. â€œBut I donâ€™t really care who they bring in. I will compete with anybody.â€

That was April, this is June. It will likely be talked about soon, but there’s no real reason to expect Miller’s response to change. The Buckeyes should consider a second quarterback if there’s room to do so, but they won’t do it without Miller’s blessing.