Buckeyes don't need to rush to recruit running back this year
Article written by:

Have a question about Ohio State recruiting? This is the place for you, five days a week. Submit your questions on Twitter or on the Lettermen Row forums. Check in daily to see what’s on the mind of Buckeyes fans all over the country. Tuesday’s question asks about the 2020 running back situation and how Ohio State may handle it.

Would the buckeyes purposely hold off on signing a tailback in Hope's of having a great season and possibly drawing the pledge of an elite tailback rather than signing one soon?

There have been a ton of questions in the last few weeks about the Class of 2020 running back situation at Ohio State, and that’s understandable considering the way July finished. We’ve tried to answer most of them — seriously there’s been a number of questions — and because of that I’ve tried to avoid the topic over the last week-plus.

But I am going to dive into this one today because I think what it suggests actually makes a lot of sense.

Basically, it comes down to this: Bijan Robinson and Jaylen Knighton shocked Ohio State by flipping around their plans, but there’s no need for the Buckeyes to rush into taking another player or two in their place. It may feel like panic time because the majority of the country’s most well-known and top-ranked tailbacks are already committed elsewhere, but there is no shortage of options left on the board — especially for a program like Ohio State.

There are few programs in the country that have the cachet the Buckeyes have. Yes, that’s going to keep some doors open much longer than they would be for other schools. There is no reason to hurry for Ryan Day and Tony Alford, and there’s no reason to consider accepting a commitment right now from any player who isn’t going to be a difference-maker inside of the Ohio State program.

I don’t believe that Kendall Milton, Zach Evans, Bijan Robinson or anyone in that tier is going to come back around to the Buckeyes. But there’s no doubt that patience is the best move for Ohio State right now for a number of reasons, starting with the fact that there is no room for marginal talents on the roster if it wants to compete for national titles. 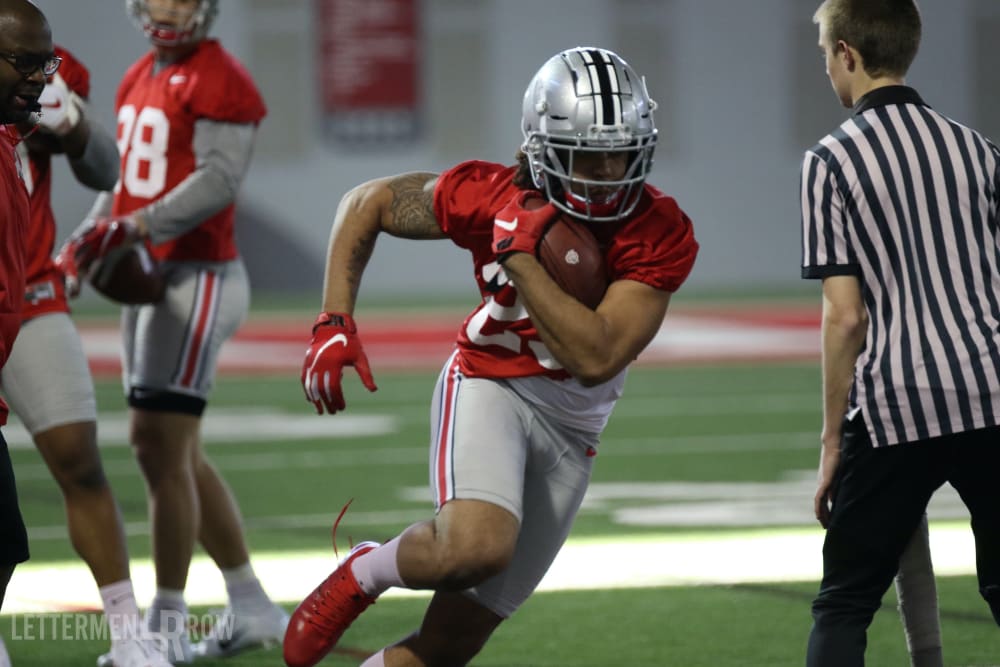 Marcus Crowley was an unknown in Ohio State recruiting circles until October of his senior season, now he’s pushing toward the two-deep as a true freshman. (Birm/Lettermen Row)

Beyond that, though, there are more tangible and logical reasons to wait things out. Some players don’t develop and burst onto the scene until their senior seasons, like Marcus Crowley a year ago. Some guys will certainly flip late in the process and find themselves intrigued by the very successful, very multiple Ohio State offense. Some guys will see the current crop of running backs in Columbus — depth that was used against the Buckeyes in the Bijan Robinson battle — and maybe they’ll see it’s not as deep as they were led to believe.

Hell, maybe it’sÂ deeper than it seems if J.K. Dobbins decides to return next year and if Crowley, Master Teague and Steele Chambers all prove they’re capable of being a dude for Ohio State.

The recruiting calendar appears to be getting faster and faster every single year, but that doesn’t mean that Ohio State has to be a slave to it. The prudent measure is to continue evaluating running backs while making sure that the presumed need matches up to the actual need come December.