Stay in touch or be left out because Ohio State recruiting is a 24-hour, seven-day-per-week obsession. What’s the latest news as the Buckeyes build for the future? Get that and more Sunday through Thursday on Lettermen Row. Tonight’s update updates the status of the 15 Buckeyes official visitors from the monster June 21 recruiting weekend at Ohio State.

Ohio State hosted 15 official visitors last weekend, and though a handful of them are already committed to the program, that doesn’t mean it was a waste to have those players back on campus. Ryan Day and his coaching staff used every opportunity to build up the 2020 recruiting class by solidifying relationships between families and peers as much as they were trying to build it out by adding new players.

Simply put, official visit weekends are just as important for committed players as they are uncommitted players. These are the weekends where the future is forged and bonds are created that last throughout the next four-to-five years. That is easy to see in the reaction from Ohio State commitments who made the trip.

Here are the things I’m hearing and being told from this weekend.

“It’s the best decision I’ve ever made,” recent Penn State flip Grant Toutant told Lettermen Row. “It was amazing. When I was with the guys, it just felt like we were all friends who’d known each other forever.”

Aside from Toutant, the Buckeyes also welcomed in Paris Johnson and his family. It was a very important two-day visit that each side hoped would put to rest any of the doubt and unease from the last six-plus months of Johnson essentially reopening his recruitment. After doing a little digging on this trip, I think the Buckeyes should be breathing easy moving forward when it comes to the country’s top-ranked tackle prospect. 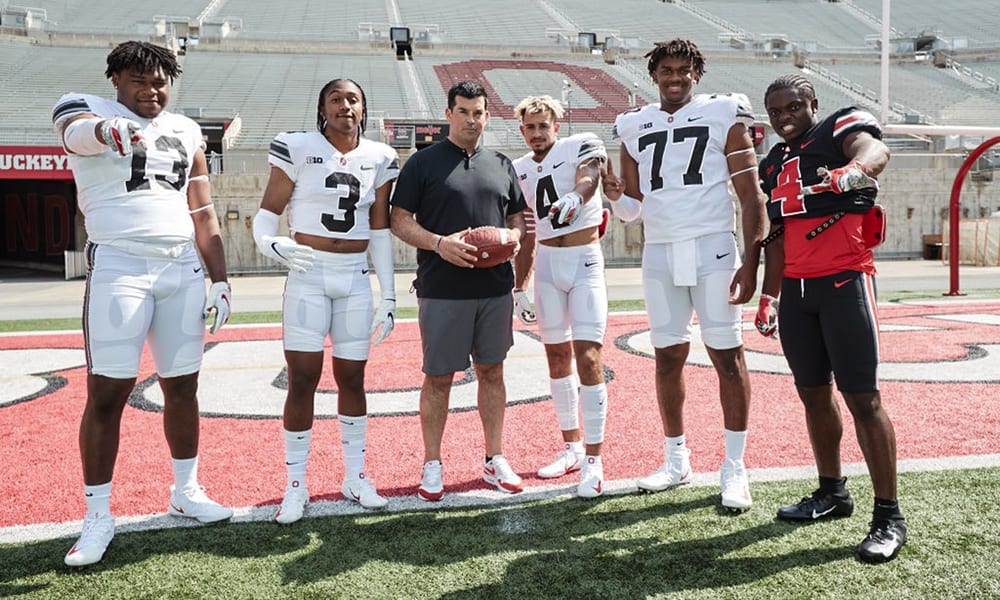 For the Johnson clan, the decision to make other visits was not an easy one. Despite how much fun they’ve had on the road visiting LSU, Georgia, Alabama and others, it was done out of necessity. A backup plan was needed in the event things never felt right again in Columbus or if the feeling they had about the Buckeyes when Johnson committed didn’t return in the wake of Urban Meyer’s departure.

Ohio State had nothing to gain by trying to put restrictions on Johnson’s commitment and his travel plans. Instead it focused on what it could control: Showing why things with the Buckeyes are still on the right track.

I’m hearing that’s paid off and things should be effectively settled from here and moving forward.

Breaking down Ohio State targets, buzz around each

All 13 other official visitors from last weekend are not committed to Ohio State or anywhere else, and because of that it was a chance for the coaching staff to make a serious move in a number of key recruitments.

Let’s run them down individually based on what I’m hearing and what could come next.

After cancelling official visits to Ohio State and Notre Dame because both schools were now done recruiting interior linemen, Colorado 3-star lineman Reece AtteberryÂ committed to Michigan as part of a big weekend for the Wolverines.

So far, Jim Harbaugh’s program has added five commitments, including Jordan Morant and William Mohan, two players who were considering Ohio State as well. The Buckeyes have other priorities at linebacker and weren’t recruiting Mohan nearly as hard as Michigan, but they did host him for a visit the previous weekend and would’ve liked for him to delay a decision into the fall. He saw no reason to do so.

Luke Lachey made official visits to Michigan State and Iowa over the weekend. If the Buckeyes don’t offer soon, it’s very likely that this Ohio State legacy will be playing for a Big Ten foe in the next few years instead. The decisions from Joe Royer, Cam Large and Jalin Conyers need to happen sooner rather than later for the Buckeyes to gain some much-needed clarity here.

Bijan Robinson made his official visit to Texas over the weekend, days after a trip to USC and a week after his lone visit to Columbus. Those three universities now comprise his final choices. Ohio State sources have been cautiously optimistic in their position since he left Ohio, but the Texas visit definitely has remained a concern as the Buckeyes wait for the final word from the 5-star running back. Ohio State still feels good following his visit with the Longhorns, but so does Texas and USC.

We mentioned it here last week, but don’t be surprised if Akron Archbishop Hoban 4-star running back DeaMonte Traynum picks Arizona State over Ohio State whenever he makes his final decision. The primary sticking point remains Trayanum’s desire to be a running back in college. For whatever reason, there’s doubt he’d be in that spot at Ohio State.