Ohio State football recruiting can be a wild ride full of twists and turns as recruits from all over the country maneuver their way to signing day. Lettermen Row is here to help you navigate the tumultuous roads by getting to the heart of the matter with the young football players themselves. BirminologyÂ shows who the young men being recruited by Ohio State truly are — by talking to them. Today’s guest: Paris Johnson, the Buckeyes 5-star offensive tackle commit from Cincinnati.

CINCINNATI — Paris Johnson admits there were moments when he felt things about other schools during his recent spring college tour that made him question his commitment to Ohio State.

One trip to Georgia led to another trip to Georgia. And those two trips produced a third in a one-month stretch. There were moments of feeling the same love he experienced at Ohio State during visits to LSU thanks to coach Ed Orgeron and Baton Rouge’s southern hospitality.

But between every visit to those SEC powers, there were visits back to Ohio State. There was always a trip back to Columbus, a city that Johnson had grown to love during his first recruitment and throughout his junior season of high school. The 6-foot-7, 290-pound offensive tackle spent every weekend on campus with the Buckeyes last fall, getting closer to the guys he’d be playing alongside and establishing a real, sincere relationship with Urban Meyer, the coach he wanted to play for in college.

Urban MeyerÂ was Ohio State football for Johnson. There was not one without the other. 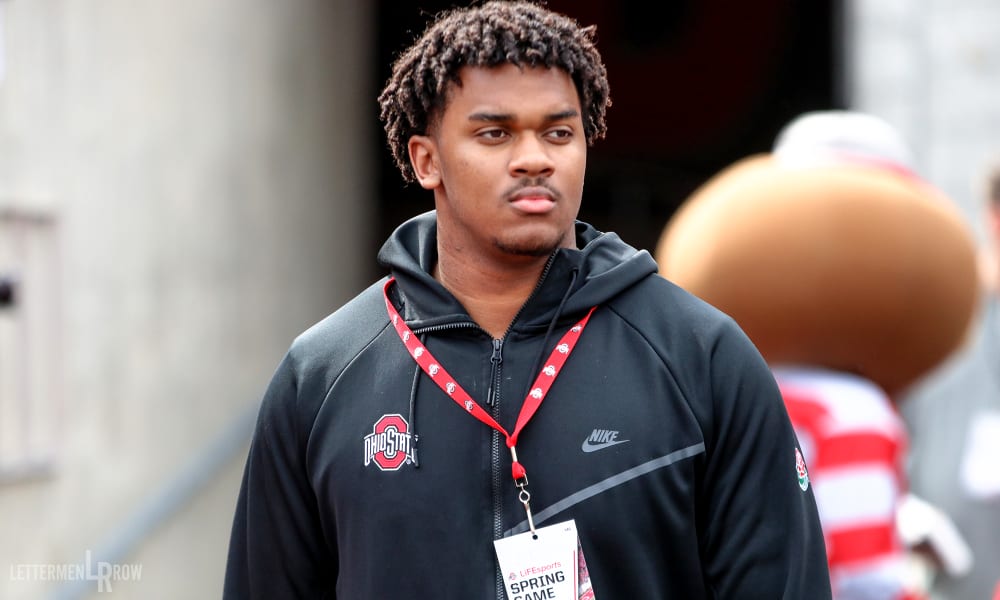 Paris Johnson is ready to be back at Ohio State this fall — and nowhere else. (Birm/Lettermen Row)

When Meyer dropped the bombshell that he was retiring last December, it was Johnson and his mother Monica who received one of the first phone calls from the Buckeyes staff. The emotions ran from pissed off to frustrated, from confused to concerned. For months, Johnson’s plan had been locked into place. Everything he did was with the goal of getting to Ohio State in mind, and in the blink-of-an-eye, everything changed. Some close to the family recommended that Johnson detach from the Buckeyes and completely reopen his recruitment with a public decommitment.

Johnson and his family decided that wasn’t their best course of action. They chose instead to do what they’d always done: Go back to Ohio State.

Four days after Meyer’s retirement was announced, Ryan Day had his first chance to sit down with the cornerstone lineman and an accord was reached. Johnson would stay committed to Ohio State and give the new staff a chance, but he’d also allow himself to visit programs he still held an interest in.

The visits happened, one after another. Tennessee, LSU, Georgia, Alabama and others saw the Buckeyes commitment on campus. And at every turn, Johnson kept the Ohio State staff in the know what he was doing, what he was feeling. In turn, Ryan Day and his staff offered up respect to Johnson and his family. It was a cool and confident approach by Day that belied his inexperience as a head coach.

â€œIt felt like it did when PJ committed a year ago,â€ Monica Johnson told Lettermen Row in June. â€œIt was a comfort. We were searching for that peace.â€

They found it at Ohio State, where it had always been. Now, after months of back and forth, Johnson is locked in with the Buckeyes and sees an end to the whirlwind that has been the last eight months. He’ll enroll at Ohio State in January, something he’s able to do now after making a difficult decision to leave Cincinnati St. Xavier High School. That’s his sole focus.

In this week’s edition of Birminology on Lettermen Row, Paris Johnson explains his thought process when it comes to that transfer, talks about why Ryan Day and Greg Studrawa’s approach was surprising and refreshing, opens up about why he didn’t see himself at Georgia or LSU and a whole lot more.