Have a question about Ohio State recruiting? This is the place for you, five days a week. Submit your questions on Twitter or on the Lettermen Row forums. Check in daily to see what’s on the mind of Buckeyes fans all over the country. Today’s question asks how the Buckeyes and 5-star offensive lineman Paris Johnson following his official visit at Ohio State.

Is the staff now operating like Paris will be here? And with Reece and fryar going elsewhere, who can you see being the 6th lineman?

Let’s first look at the way Ohio State has handled what was a very difficult situation for Ohio State, Paris Johnson and his family.Â I’ve written about it in the past, but I think it’s worth reiterating here: There was aÂ very different way things could’ve gone between the Buckeyes and the 5-star offensive tackle from Cincinnati.

When Urban Meyer retired in December, it was a complete system shock to the 6-foot-7, 285-pound lineman and his family. They had grownÂ extremely close to Meyer, and when it became known that he was retiring, the family took it hard.

The weekend after Meyer’s announcement, the Johnsons traveled to Columbus to meet with Ryan Day and the Buckeyes. Yes, Urban Meyer played a part in that weekend. He made sure that his recommendation of Day as his successor didn’t get lost in the shuffle. But he also made sure that Johnson knew that whatever he had to do in order to be comfortable with Ohio State moving forward, he should do and would be supported by the program in doing so.

The decision after that visit was this: Stay committed, visit as often as possible and visit elsewhere as needed. We wrote about it here on Lettermen Row following that meeting and what would likely happen.

“If I had to posit a guess, which I suppose is what youâ€™re reading this for, it would be this: Johnson stays committed to Ohio State. But heâ€™ll allow himself to take visits to other schools as he and his family get more familiar with Ryan Day.

Itâ€™s not exactly what Buckeyes fans should want, but Ryan Dayâ€™s going to get his chance to prove why Ohio State is the right spot for Johnson and thatâ€™s all he can ask for.”

That’s exactly what happened. And it was theÂ only way Ohio State should’ve reacted if it wanted to keep Johnson as an option.

There was no justification for ultimatums. There were no hard feelings. The people in charge in Columbus knew full well that Johnson and his family — who had become some of the program’s best recruiters — had every rightful, rational reason to look around while they sorted out their feelings. 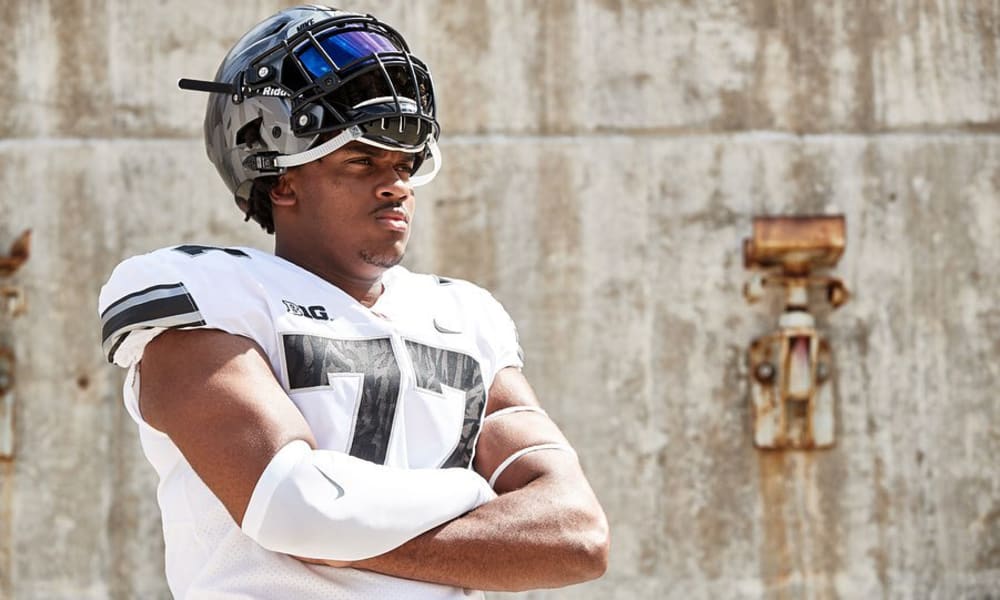 Paris Johnson had a lot to consider in the months following Urban Meyer’s retirement. (Paris Johnson/Courtesy)

But Ohio State never once operated like Paris Johnson wouldn’t be in its 2020 recruiting class.

I think that’s really because they have always felt that Johnson’s heart has been in Columbus since he committed last June. If the Buckeyes had opted for a more confrontational route, it would have sent a message that it thought he was replaceable in this cycle. Quite simply: He’s not.

He’s the country’s top-ranked offensive tackle in a year when the Buckeyes are desperately seeking tackles. He lives in Ohio. For six months he was eating and breathing everything Ohio State and was the program’s most active and recognizable recruiter among his peers. In a world where very few targets qualify as must-get recruits, Paris Johnson is the definition of that for Day in his first full year running the show for the Buckeyes.

And like he has done with so many of the early tests that he’s faced in his time at the helm, Day appears to be on his way to clearing this major hurdle. And the Buckeyes should then see the benefits of that in the shape of an all-in type of commitment in the near future from Johnson.

Ohio State offered Johnson respect and grace while he figured out his feelings, and the country’s top-ranked tackle made sure they received visits nearly every time he went anywhere else. He never went behind the program’s back or kept things from the coaching staff.

That is how to navigate a challenging recruitment without losing what matters the most — the relationship between the two sides.