Stay in touch or be left out because Ohio State recruiting is a 24-hour, seven-day-per-week obsession. What’s the latest news as the Buckeyes build for the future? Get that and more Sunday through Thursday on Lettermen Row. Tuesday, Lettermen Row breaks down the nuance that is so often confusing in the world of college football recruiting and the Buckeyes running back situation in 2020.

For whatever reason, recruits are dropping out of the Texas 2020 class at a rapid rate. And because of that, there’s been some discussion about whether Robinson would follow suit after he committed to Texas over Ohio State and USC in early August. In that initial column, it was written that there’d been no contact between Robinson and the Buckeyes, and that was refuted days later by Robinson himself. Following a press conference in which he was awarded his All-American Game jersey, he suggested toÂ 247Sports.com that he had been hearing somewhat regularly from Ohio State still.

“They give me advice all the time, they tell me to keep working and hanging in there since this recruiting thing is a process.”

Ryan Day and Tony Alford reaching out to Robinson isn’t unexpected. In my opinion, he’s the country’s best running back — and he had committed to Ohio State just weeks before changing his mind and picking the Longhorns. The Buckeyes would be foolish not to maintain the relationship with Robinson and his family, because he is quite simply the top player at his position and has been for months.

It doesn’t matter if Ohio State was the runner-up to Texas or if it was USC. What matters is that he’s committed to the Longhorns. 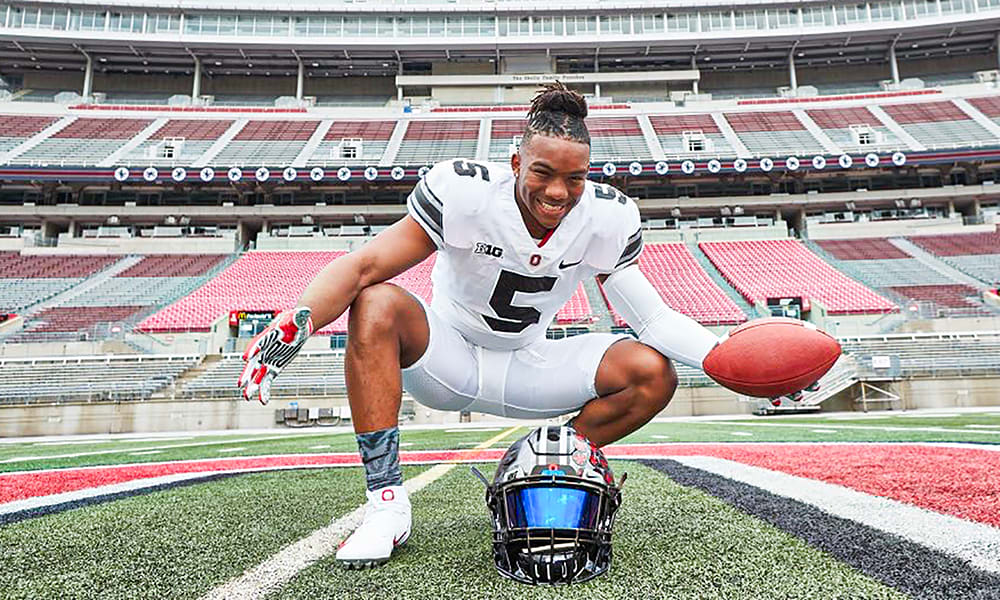 As a result of the mixed messages — which were mostly a matter of semantics and confused syntax because Robinson had not been reaching out to Ohio State, though there had been communication between the two sides — it’s been interesting to watch the ripple effect caused by the running back’s words during that late-week press conference. There is a lot of reading between the lines being done by recruiting analysts and college coaches all over the country. And everybody takes notice when recruits are using words like “right now” when describing the strength of their commitment.

Here’s what I know and where I think things stand with Robinson.

First, it’s clear the uber-talented tailback has some concerns about Texas and the general status of that program. He committed believing that they had turned the corner as a team, that there’d be an improved offense in Austin that would feature the running game and that Stan Drayton, who helped develop Ezekiel Elliott, would be able to do the same thing for him. So far, those points look debatable. Tom Herman’s offense continues to rely on the quarterback as the primary ball carrier, and the Longhorns have once again failed to assert themselves as a real contender alongside Oklahoma in the Big 12.

I think the situation at USC doesn’t make things easier for Robinson, who grew up idolizing Reggie Bush and dreaming of playing in the Coliseum, a quick trip from his Tucson home — and with family in Los Angeles, a potential hometown vibe. The writing is on the wall for Clay Helton and the current USC coaching staff. And because of that, it has to be hard for Robinson to feel any kind of security if he felt like flipping his verbal to USC.

Then there’s Ohio State. The Buckeyes have done a good job maintaining a working relationship with Robinson and his family without pressuring him as a recruit. Alford has continued to be available to him as a mentor and friend, as has Ryan Day. But according to people who know the family, they both have done so without making it about Ohio State. Recruiting is about relationship building, and many of these ties continue well beyond a player’s college years. There’s no reason to completely shut off communication for any number of reasons.

Bottom line? If Bijan Robinson wants to re-open his recruitment and wants to reconsider his options, the Buckeyes would certainly welcome him into their 2020 class with arms wide open.

What about Jaylan Knighton, Buckeyes reuniting?

Bijan Robinson isn’t the only former silently-committed-to-Ohio State running back who has re-emerged in the discussion at this key position.

As mentioned in Monday’sÂ Dotting the ‘Eyes, Deerfield Beach (Fla.) running back Jaylan Knighton reopened his recruitment and decommitted from Florida State one day after it dismissed underperforming coach Willie Taggart.

One of the first questions after Taggart’s fate became known was whether or not Ohio State would get back into the race for Knighton. The Buckeyes are obviously still searching for a running back in the Class of 2020, and Knighton was a top target for them over the summer. But as mentioned here repeatedly: Don’t expect to see Ohio State chase the 5-foot-10, 190-pound tailback at this point.

Does that mean he won’t be chasing the Buckeyes? Not necessarily, because as I wrote over a month ago, he’s maintained interest in Ohio State and reached out to get a sense of the reciprocated interest early on this season.

Far more than with Bijan Robinson, the case with Knighton is one where relationship maintenance is a much more accurate assessment of things instead of currently being recruited by Ohio State. If Knighton and his family want to travel to Columbus again in late November — on their own dime, since his June visit was his official visit — he’s certainly going to be welcomed into town to watch a game.

That doesn’t mean he’s being recruited with any seriousness by the Buckeyes at this time. Barring a major change of circumstances in Columbus I don’t expect that to change.

What’s the bottom line for running back recruiting?

Recruiting is so nuanced. It has a lot of gray areas, and the case of these two running backs is as good an example of that as any out there.

High school coaches and recruits have a unique ability to control the message about their recruitment, and because of that, the narrative often gets twisted, publicized or promoted from only one angle. It’s good to get a player’s opinion on the record, and Lettermen Row does it all the time, but that’s just one piece of information that presents an incomplete picture.

Major colleges like Ohio State spend years building relationships in talent-rich areas of the country. It does that so on the off-chance a player of its caliber is available, there’s an open door to walk through. More and more, high school talents, their coaches and their families are being taught to use the schools that have recruited them as a means of opening other doors — and there’s absolutely nothing wrong with doing so.

There are verbal offers going out to kids all over the country on a daily basis that schools never intend to honor. So, it’s perfectly acceptable for players who know those offers aren’t going to carry weight to use them to drum up interest from other programs. Recruiting is the lifeblood of college football and it keeps pumping in each and every direction, day in and day out.

None of it is an exact science. But when as much information from all sides is fully evaluated, here’s what matters for the Buckeyes right now: Bijan Robinson is committed to Texas but Ohio State remains in the mix; Jaylan Knighton has decommitted but the Buckeyes aren’t likely to pursue him even if they’re not ignoring his calls — and that tailback spot in the class is still up for grabs.