The speculation, debate and conversations about Ohio State never end, and Lettermen Row is always ready to dive into the discussions. All week long, senior writer Austin Ward will field topics about the Buckeyes submitted by readers and break down anything that’s on the minds of the Best Damn Fans in the Land. Have a question that needs to be tackled, like the one today about how Ohio State and a prediction for The Game? Send it in right here — and check back daily for the answers.

Ohio State is a road favorite in the rivalry game at Michigan. (Bovada/Courtesy)

The winning streak before The Game would be ignored, and a potential run at the national championship after it would come with something of an asterisk.

For everything Ryan Day has accomplished already leading Ohio State and all that would be on the table both in the postseason this year or down the road, he’s only going to get one shot at a first impression against rival Michigan. It’s not a mystery to him that this is the matchup that will always define his career with the program, and losing it would certainly change the perception of the early days of his tenure.

Think somebody who wasn’t born in the Buckeye State doesn’t understand the stakes? Yeah, right.

“It’s no secret that part of your evaluation as the head coach at Ohio State is how you do in this game,” Day said. “We all know that. When you take this job, you understand it. You can win them all, not win this game, feel like it’s a disappointment. I get that, embrace it. That’s why we’re working so hard this week. 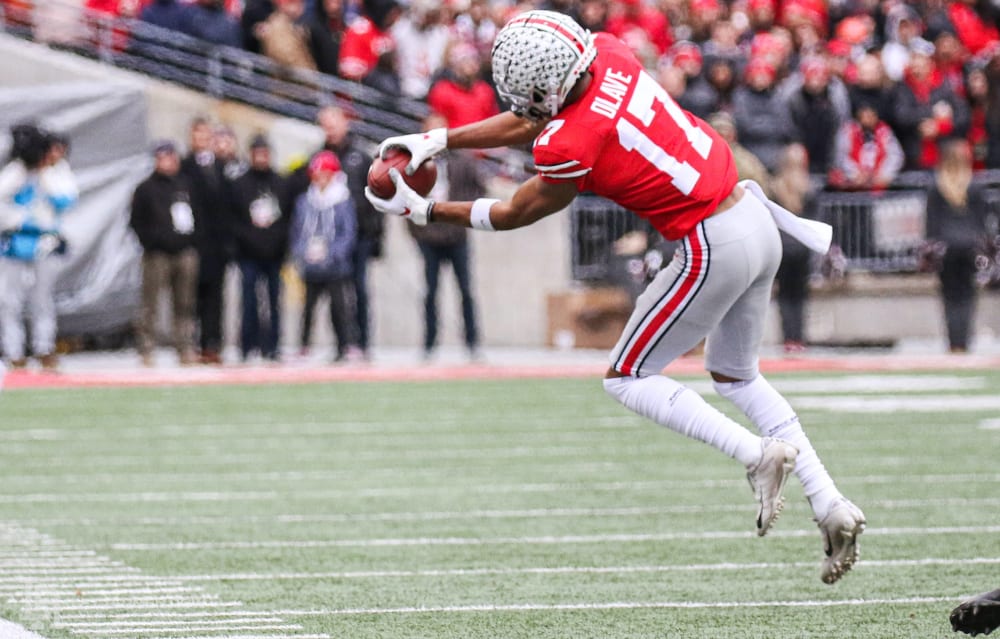 Ohio State wide receiver Chris Olave has already been a star in The Game against Michigan. (Birm/Lettermen Row)

“I think for me to see what this means to the people of Ohio, the Buckeye Nation, that’s to me where it really hits home to me. It strikes in my heart strong. I just see this is everything.Â I just know the Ohio State football team means everything to the people of Ohio. It runs deep in their blood. It’s who they are, it’s their identity, their pride. To be the head coach of the football team, that’s an unbelievable responsibility.”

The Buckeyes expect to contend for national championships every year as well, but in many respects a set of Gold Pants trumps a trophy from the College Football Playoff. That might sound a little crazy to outsiders, but that maniacal focus on the rivalry is what has fueled the dominance over Michigan — and setting the standard against that hated foe has gone hand in hand with solidifying the program on the national stage.

Jim Tressel and Urban Meyer have now handed down an incredible legacy to Day, and his predecessor is also now entrusting him with the famed 7-0 record against the Wolverines that he retired with at the end of last season. Add in the fact that Meyer’s unbeaten run has kept Jim Harbaugh from ever claiming a win as the coach at Michigan and that only magnifies the importance for Day as he takes his turn going head-to-head against him on the field and the recruiting trail.

Day has shown every indication over the course of his first year in charge that nothing has changed with the seriousness at Ohio State from the top down when it comes to Michigan. He’s also already proven that he can slice up the Michigan defense after an epic beatdown last year when he was the offensive coordinator, and his Buckeyes this year have also left no doubt about the standard they expect while beating every opponent by a double-digit margin.

The Buckeyes aren’t going to stop now, and the Ryan Day Era will pick up right where the last one at Ohio State left off.