COLUMBUS â€” The Ohio State football team opened up the doors of the Woody Hayes Athletic Center to the media for the first time this spring and the three-man quarterback battle was the focus for everyone in attendance.

Second-year signal-callers C.J. Stroud and Jack Miller shared reps with early-enrolled freshman Kyle McCord as the Buckeyes whizzed through a handful of drills on the indoor practice field. There was not much to see in the almost 20 minutes of action that was open, but the energy was high and the pace was efficient.

The Buckeyes had a number of interesting things happening though, including returning players at new positions. Gee Scott, a former 5-star receiver, was working with the Ohio State tight ends. Fifth-year player Demario McCall was on the other side of the football, working with the defensive backs. Spring is the time to experiment and the Buckeyes aren’t afraid to mix it up right now. The focus is learning football, not necessarily locking players into roles or positions.

Football is back in Columbus and for the first time this spring, it almost felt normal. The Buckeyes will have their annual spring football game on April 17, so it will be interesting to see which of these adjustments get an extended look.

Lettermen Row was in attendance on Friday morning and got a chance to see the new-look Buckeyes. Check out the photo gallery below for a glimpse at Ryan Day’s 2021 team. 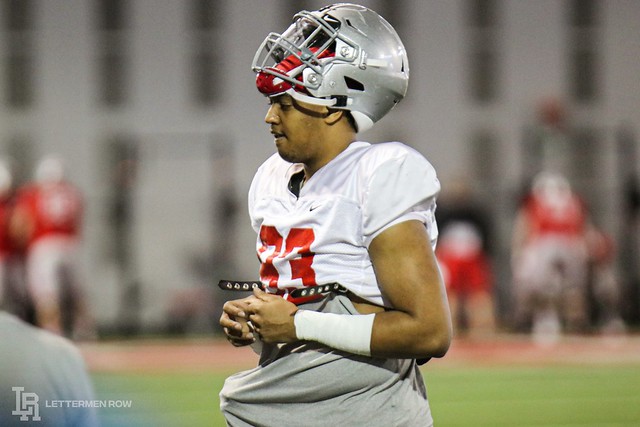