The speculation, debate and conversations about Ohio State never end, and Lettermen Row is always ready to dive into the discussions. All week long, senior writer Austin Ward will field topics about the Buckeyes submitted by readers and break down anything that’s on the minds of the Best Damn Fans in the Land. Have a question that needs to be tackled, like the one today aboutÂ the Ohio State offensive line? Send it in right here — and check back daily for the answers.

Camp-based offensive line update. 247 is saying is saying Bowen and NPF are looking great, which is great news.
(unless I missed an OL update last week)

A gifted offensive tackle is going to have to come off the bench for Ohio State. And even considering how elite some of the units have been for the Buckeyes over the last few seasons, there haven’t been many seasons where there was so much optimism that they could withstand an injury or two at that key position.

Last season was supposed to be the one that featured the most versatile, deepest group of the Urban Meyer Era, but it never quite panned out the way. The Buckeyes obviously had to get creative by pursuing graduate transfer Jonah Jackson to bolster the lineup at guard, and they aren’t operating at full strength right now with Thayer Munford sitting out the spring to recover from the injuries that plagued him for most of last season. But the fact that neither of those potential starters are in camp for the Buckeyes might actually be a blessing, particularly when it comes to bringing Branden Bowen back from injury and trying to gauge if Nicholas Petit-Frere is ready to unleash his five-star ability. 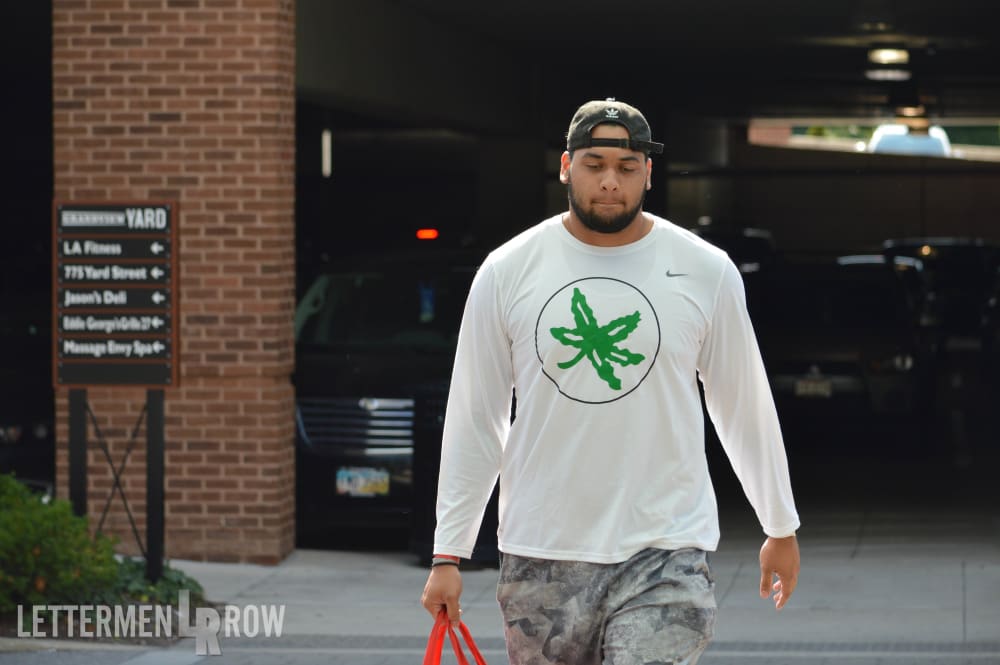 Ohio State will finally have a healthy Branden Bowen back in the rotation this season. (Nick Clarkson/Lettermen Row)

Truly, both guys look the part of starting-caliber tackles at Ohio State, and Joshua Alabi has also proven that he can get the job done thanks to his start in the Rose Bowl. It’s been quite a while since the Buckeyes could have as much confidence at tackle as they likely would with those four guys all healthy this fall, and it’s going to to continue to create an intriguing competition on the right side heading into August.

It’s hard to know for sure what the glimpse at a unit with Bowen at left tackle and Petit-Frere on the right side last weekend truly means at this point. Is it a sign that Bowen is ahead in the battle and should be manning that critical spot in Munford’s place to give Ohio State the best possible looks on offense? Are the Buckeyes seeing enough from Petit-Frere and finding a comfortable fit that they want him to truly settle in on the right side like Isaiah Prince did over the last few years? It’s also possible that it doesn’t really signify anything and was just the way Ohio State practiced for a single day with the public watching and Alabi sick, but it surely still counts for something since Ryan Day makes sure that everything that happens with his program is done with a purpose.

What is becoming clear, though, is that Ohio State has more than enough potential at tackle to get that unit back to an elite level. And it’s a sign of strength that eventually there will be an extra starter or two waiting in the wings if needed.