The speculation, debate and conversations about Ohio State never end, and Lettermen Row is always ready to dive into the discussions. All week long, Lettermen RowÂ will field topics about the Buckeyes submitted by readers and break down anything thatâ€™s on the minds of the Best Damn Fans in the Land. Have a question that needs to be tackled, like the one today about the Ohio State andÂ the motivational success of Ryan Day? Send it inÂ right here â€” and check back daily for the answers.

@AWardSports @TIM_MAYsports @Birm thoughts on the forecast and its effects on the game Saturday? I just can't get msu 2015 out of my head when I see the rain coming

If the game plan was determined based on weather, maybe Ohio State would plan to run the ball every down and hope to find the end zone a couple times.

But it isn’t, and it won’t be Saturday, regardless of how much rain falls at Ohio Stadium.

“We have to make adjustments as individuals, guys who carry the ball, but other than that, we’re still going to have the same game plan regardless of the weather,” coach Ryan Day said. “Unless it’s just completely brutal.”

Completely brutal could describe what the Buckeyes played through in 2015, when Michigan State upset arguably the most talentedÂ Ohio State team ever. The Buckeyes couldn’t generate offense and only scored 14 points in the loss. Don’t plan on watching the Buckeyes plod through a simplified game plan just because the weather looks bleak.

Since finding out the possibility of rain early in the week, Justin Fields and the offense have been practicing for and anticipating sloppy weather for the top-15 showdown. They seem to be comfortable with the idea of a wet weekend in Columbus.

â€œWe practice with a wet ball,â€ quarterback Justin Fields said. â€œEvery period, [senior quality control coach] Corey [Dennis] will go out there and squirt the ball with water. We practice with it. The receivers are very comfortable with it, and I think that wouldnâ€™t be a problem.â€

Wide receiver K.J Hill seems comfortable with a wet ball to the point that he didn’t even know it was supposed to rain.

For him, it doesn’t matter what the weather is.

“You just get used to it when you’ve been playing all your life, so you know how to adjust in rainy games,” Hill said. “Take your gloves off, for me as a receiver. With that, just practice through it and play through it. There’s going to be mistakes, but you can’t look at it.” 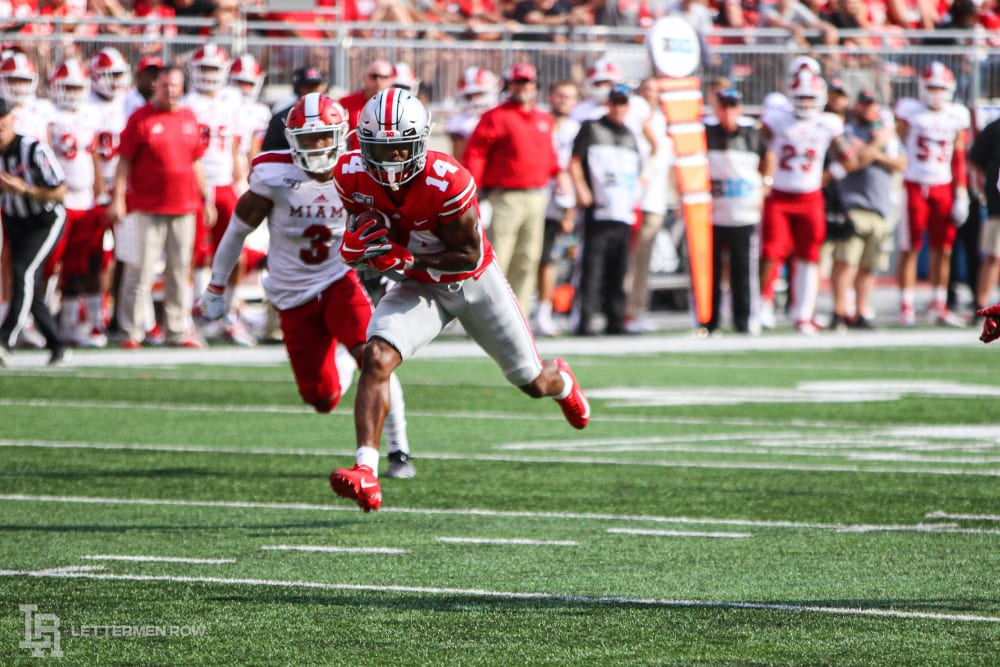 Wide receiver K.J. Hill and the offense will have to battle rain Saturday. (Birm/Lettermen Row)

The only thing Ohio State and Wisconsin can do is play through it. There isn’t a choice. Ohio Stadium isn’t going to have a closed roof or protection, so the game will likely be played in the rain. Ohio State isn’t going to change what it does offensively just because the weather isn’t perfect.

Although, there is a caveat to that.

“There’s different levels of rain, too,” Day said. “There’s kinda where it’s out there and it’s raining, But there’s also the stuff that’s sideways like in that Illinois game a few years ago. It was hard to just take a snap.

“In those situations, you have to be a little bit more conservative. But if it’s just raining out, we have our full arsenal.”

If Ohio State has to go a conservative route and run the ball, J.K. Dobbins and Master Teague seem to be up for that challenge of taking over a game, and Wisconsin’s Jonathan Taylor certainly won’t mind the additional carries.

And even if the rain is falling hard, don’t expect an Ohio State game plan that is any different than the dominant attack from the first seven games of the season.