COLUMBUS — Chris Olave didn’t know if he could play at Ohio State when he arrived last June.

As a former 3-star recruit, he questioned his size and weight. But a couple months in the Buckeyes weight room and a handful of fall practices later, Olave grew out of that.

Then when Austin Mack went down with a season-ending injury in November, the true freshman Olave had a chance to play meaningful snaps during the most crucial portion of Ohio State’s schedule.

The results? Two catches in the first half of the Buckeyes win over Michigan State. Two touchdown grabs and a blocked punt against Michigan. Another score in the Big Ten Championship Game win.

Even Olave was caught off-guard a bit.

“The Team Up North game, I kind of busted out and had a great game,” he said. “That first touchdown, I was kind of surprised and shocked, but I just went along with it and played like how I do. It all came through.â€

Surprises are gone, now. He torched the best defense in the country last year on Ohio State’s biggest stage. Last season was reserved for building confidence and proving he could compete at this level. His coming-out party is entirely behind him.

Heading into 2019, Olave’s confidence is there. That’s why he’s working with wide receiver coach Brian Hartline on staying consistent and fine-tuning. Hartline, along with the rest of the country, saw what Olave can be at his best: Dominant. 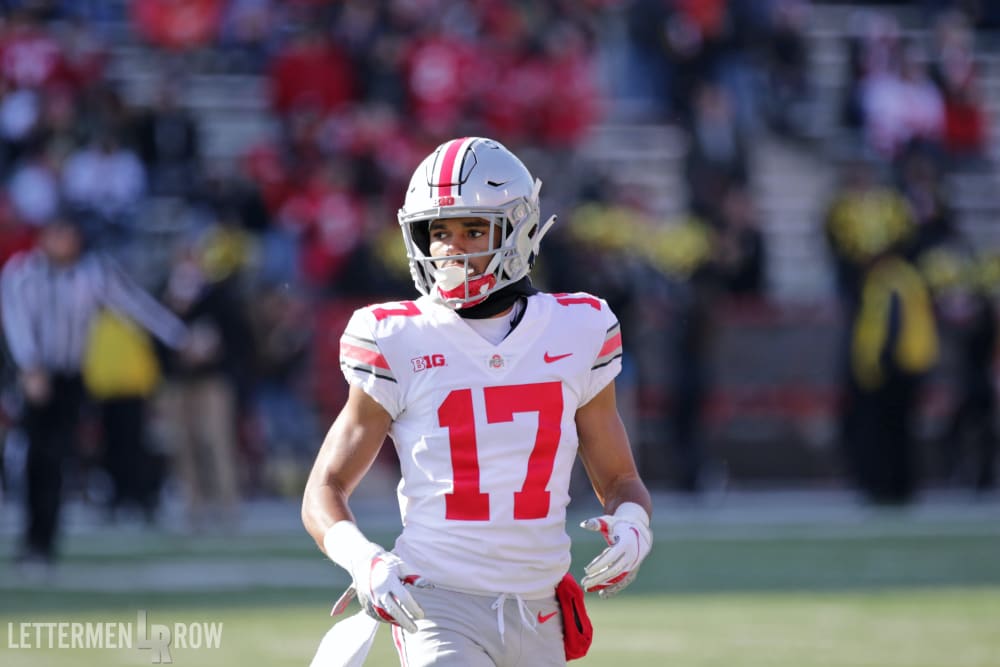 Chris Olave is working on being more consistent this offseason. (Birm/Lettermen Row)

But Hartline wants to see Olave stay consistent in what he’s doing. Over the course of spring practice, Hartline challenged Olave to be great.

“His level of consistency will change whether he’s a good player or he’s a great player,” Hartline said.

So far, so good for Olave. He’s carrying the same mindset as last season, trying to prove he can do even more for the Buckeyes than he’s already done in his one year he’s had.

Terry McLaurin was a “big brother” figure for Olave last year at Ohio State, and at the NFL Combine in March, he gave his word of approval for Olave, who’s taking over the tradition of wide receivers for the Buckeyes.

â€œHeâ€™s going to be a great player — not just on the field but off the field,” McLaurin said. “Heâ€™s raised right and Iâ€™m happy to see what his future holds.â€

The future might not include McLaurin or record-breaking quarterback Dwayne Haskins to target Olave. But it features highly touted incoming signal caller Justin Fields, a cast of veteran receivers and a freshman phenom in Garrett Wilson.

Olave will have plenty of chances to make plays, but it may have to come on a platoon basis for the Buckeyes. Mack, Binjimen Victor, Wilson, K.J. Hill and Jaelen Gill are all presumed to be in the rotation with or around Olave. The bevy of talent at wide receiver may cloud how many targets or receptions Olave gets. When the ball is thrown his way, though, he’ll make plays.

“If I get an opportunity, I have to take advantage of it,” Olave said. “It’s either you do — or you don’t.”

He definitely took advantage of it late last season when his confidence was increased. That building stage is over.

He knows he has what he needs to play at Ohio State.