COLUMBUS â€” Since 1984, sports fans can’t see the number 23 on a jersey — whether it’s an Ohio State football jersey, a baseball jersey, or a hockey sweater –Â  without thinking of Michael Jordan.

That’s the power of branding, after all, and Nike and Jordan figured out the importance of building a personal brand earlier than most.

35 years later, it’s more important than ever, especially in college sports, as the possibility of players receiving compensation for their name, image and likeness increases. That’s why, for a number of Ohio State commitments, the always important jersey number they’ve worn throughout their football careers is set to take on new value. It’s even why some players are thinking ahead and wondering if they should change their number in order to be even more marketable.

“I wear No. 4 now,” TreVeyon Henderson, a 5-star running back from Virginia, told Lettermen Row. “And that number means a lot to me. I changed to it because of [current NFL receiver] Greg Dortch, who played for Wake Forest, I watched his highlights after my seventh grade year, and he was in high school at the time and he wore No. 4. If you watch his highlights you’ll see why I changed.”

True freshman wide receiver Julian Fleming will wear that number for the Buckeyes this season, and presumably for the next three or four years. That means Henderson will need to switch again and he’s fine with that. He’s thinking about his brand, even beyond his time at Ohio State.

“Iâ€™m going to change my number to a number in the twenties, to brand myself before I go to the NFL,” Henderson said. “Then I’ll keep the same number in the NFL. I’m feeling No. 24.”

Ohio State commitment Jack Sawyer, a 5-star defensive end from Pickerington, wears No. 40 and has for most of his football-playing life, inspired by a Madden football hero who played for the Cleveland Browns.

“What made me pick it originally was Peyton Hillis,” Sawyer said, laughing. “When I was a running back in the third grade. The number 40 has been my number since I can remember starting to play football so it means a lot to me because itâ€™s kind of who I am now.

“It wouldnâ€™t feel right wearing a different one.”

Still, growing up in the shadows of Ohio Stadium and knows the value of numbers and Buckeyes traditions more than most of his peers. His number, number 40, is the ring of honor at Ohio Stadium and that means it’ll take some extra steps to have the chance to wear it.

“I really want to be able to wear number 40 at Ohio State,” Sawyer said. “Hopalong Cassidy wore it, and he was a phenomenal player who represented Ohio State with the number 40. I hope I can be able to continue that tradition on wearing number 40.”

Current Ohio State linebacker Justin Hilliard, who wears No. 47, needed the help of Urban Meyer — who reached out to the family of Buckeyes legend Chic Harley — to get his number because 47 was enshrined in 2004. Sawyer may need that same kind of assist to make sure he gets his number. At a place like Ohio State, memories of certain players are often stoked by the number they wore and that’s why even numbers that aren’t “retired”need to be thoughtfully considered before putting them on. That’s something Ironton (Ohio) 4-star linebacker Reid Carrico, who wears No. 28 now because as a young running back he looked up to Adrian Peterson, is considering as he looks to the future.

He wants his number to evoke the same response in others that some of the great linebackers in Buckeyes history do for him.

“I don’t even know if I’ll get to pick in college, I doubt it but there are a few numbers I wouldnâ€™t like. I could never wear a number in the fifties or above, so Iâ€™d like to wear a number in the thirties or forties at Ohio State. I feel like thatâ€™s what will be given to me, but now that I think about I would probably just pick 28 if I could. I feel like itâ€™s my number because Iâ€™ve worn it for so long. I could start my own brand, you know? That’s all the more reason to keep wearing it.” 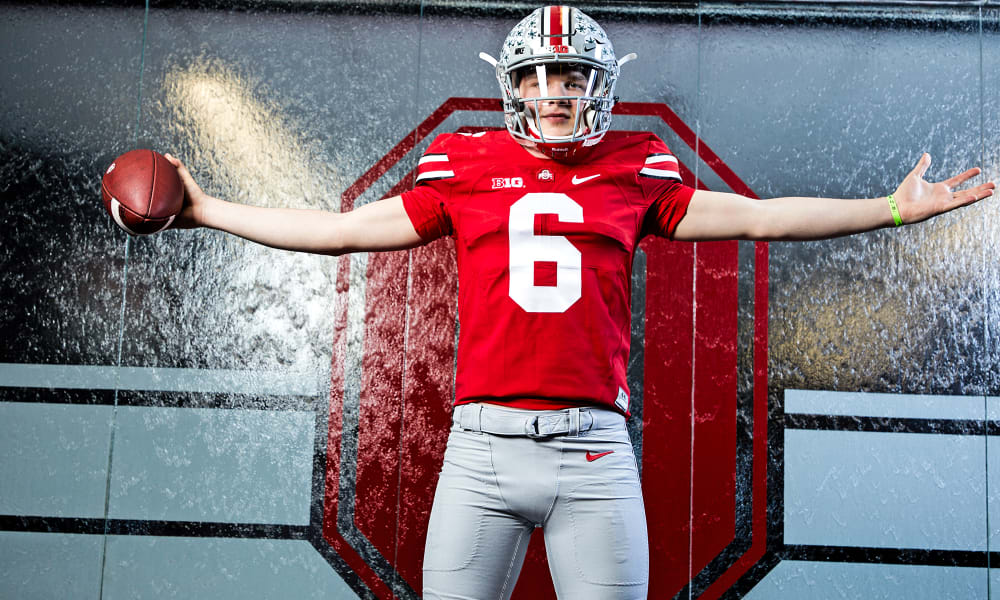 Kyle McCord wants kids to wear the No. 6 jersey in the Ohio Stadium bleachers. (Kyle McCord/Courtesy)

For those of us who grew up playing sports, the number you picked usually had a significance beyond the game. That’s the case for 5-star quarterback Kyle McCord, who donned the number 16 when he started in sports as homage to his first football hero, his father. He switched to No. 6 to honor another, then New York Jets quarterback Mark Sanchez, who led his favorite team to a pair of AFC Championship games.

“Sixteen was the number my dad wore while he was in college,” McCord said about his first number. “But one year they didnâ€™t have it and so I chose No. 6 because I was a Jets fan, and it was during the time Mark Sanchez led them to two straight AFC championships. Plus, that’s was when I started to realize that I was pretty good at football, so I just kept it to this day.”

Like his future teammates, McCord is thinking about how his number will represent him in the future. Buckeyes fans throughout the last few decades have all kinds of jersey options to pick from, with No. 2, 7, 45, 1, 5, 97, 15 and more all very well represented among the 105,000-plus packed into the Ohio Stadium seats every game day. There’s not many No. 6 jerseys out there though, and McCord wants to change that.

“Thatâ€™s another reason why I want to wear it in college,” McCord said when asked if the fact that there is no real tradition associated with the number and the quarterback position at Ohio State. “So I obviously would love to wear it but whatever number I get when I getÂ  out there, Iâ€™ll make mine.”

As schools around the country begin to think of ways to sell the name, image and likeness possibilities, it’s clear that the kids preparing for what could be a new world of college football are doing the same.