COLUMBUS — Anybody Jeff Hafley puts on the field in the Ohio State secondary better be able to get at least one hand on the football, and the preference is two.

Whether it’s an individual drill in practice, a scrimmage situation or the spring game for the Buckeyes, it doesn’t matter. The priority is always to disrupt as many passes as possible, and that goes for the starters down to the bottom of the depth chart whenever the opportunity presents itself.

Ohio State clearly didn’t do that as much as it would like a year ago, and those deficiencies in the secondary were obviously part of the problem for a defense that collectively finished as the worst statistical unit in school history. But a lack of talent doesn’t appear to have been the issue, at least based on the plays backups like Jahsen Wint and Amir Riep made in the Horseshoe on Saturday.

Who knows exactly how much work they could be in line for in the fall. But if those guys have improved enough to combine to snag three interceptions in the scrimmage, imagine what Hafley and the revamped coaching staff might squeeze out of the starters. 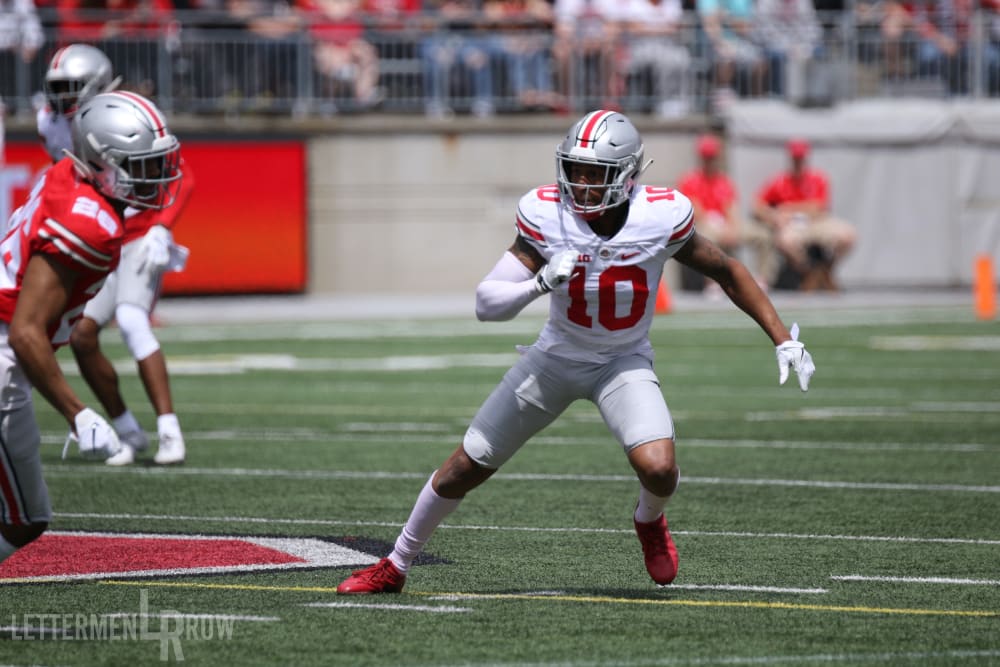 â€œI donâ€™t look at any struggle from last year,â€ Ohio State co-defensive coordinator Jeff Hafley said. â€œI look at what we have right now, and all I want to see is consistency and guys getting better every single day. To look back, to think back, to talk back, Iâ€™m just not going to do it. Iâ€™m going to look ahead and try to get these guys as good as we can.

The Buckeyes can already point to clear progress after spring on the field, and that’s translated to a surge in confidence that Hafley and co-defensive coordinator Greg Mattison are going to put everybody in the right position to make plays again this fall.

Sure, it was only a spring game. But those were live passes being thrown at the Ohio State secondary, and Hafley’s expectation when the ball is in the air doesn’t change just because the exhibition might not count in the record books.

What helped those Ohio State defensive backs close out camp on a high note? How can the Buckeyes continue to improve to get the secondary back to the level the program expects? What should be taken away from that performance heading into the summer? Former Ohio State linebacker Zach Boren returned to the Lettermen Row film lab to break it all down as the latest episode of BuckIQ breaks down the Silver Bullets.