So far in his career at Ohio State, the right combination of opportunity, experience and good health just hasn’t lined up for Demario McCall. Last season in particular was a painful one physically for the dynamic offensive weapon, who on some days had trouble even running as dealt with a nagging groin injury following hernia surgery earlier in the year. But that issue looks to be solidly in McCall’s rearview mirror now based on his electrifying performance in the spring game, one that might just be forcing the Buckeyes to reconsider their plans for him a bit this season.

There has never been any question about what McCall can provide with the his speed, elusiveness and confidence with the football in his hands. That was a significant part of the thinking that had the coaching staff trying to carve out a permanent role for McCall as a returner on special teams this season, in effect making that a full-time job where he could focus on the responsibilities of that position and get a somewhat reliable way to consistently get touches. With so many veterans returning at wide receiver, depth at H-back and a rushing workload that already has to be split between J.K. Dobbins and Mike Weber somehow, it was looking like a challenge to find out how McCall would fit in offensively. 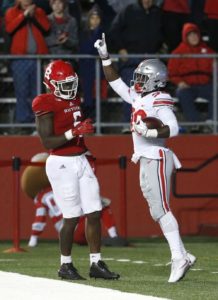 Demario McCall only got to show what he could do briefly last season due to injury. (Deonte Roberts/USA TODAY Sports)

And it’s still going to be difficult at times for Ohio State to fit all those pieces together, but McCall’s huge spring game is the newest complication. Granted, those exhibition scrimmages have to be taken with a grain of salt, but watching him rack up 11 catches for 165 yards with a pair of touchdowns made it hard to envision the Buckeyes not unleashing him this season. Just as important was the way McCall did it, showing no signs of pain, putting strong hands as a target on display and giving reason to think he can’t be limited to just catching punts.

So, a healthy McCall should be in the rotation in some capacity, and it’s a relatively safe bet that he will be. But it’s tougher to predict exactly how often he’ll be directly involved with the football in his hands, because there is still a heated race for touches. Even just at H-back, there’s kind of a logjam with Parris Campbell and K.J. Hill both returning. The biggest bonus for McCall personally is that his versatility as a rusher and receiver gives Ohio State options as it looks for ways to turn him loose — and one way or another, it looks like that time is coming.