COLUMBUS â€” For all the videos and photos that have given Buckeyes junior Demario McCall internet fame over the last few years, what’s been noticeably absent is his place in the big picture of the Ohio State offense.

A former 4-star recruit that rode into Columbus as the next budding star, McCall has instead found himself fighting for a spot on the depth chart amid a rash of injuries throughout his first three seasons at Ohio State. An electric ballcarrier, McCall also had to endure a position change that forced him out of his comfort zone — and there’s a chance that decision was the best thing to ever happen to his career. 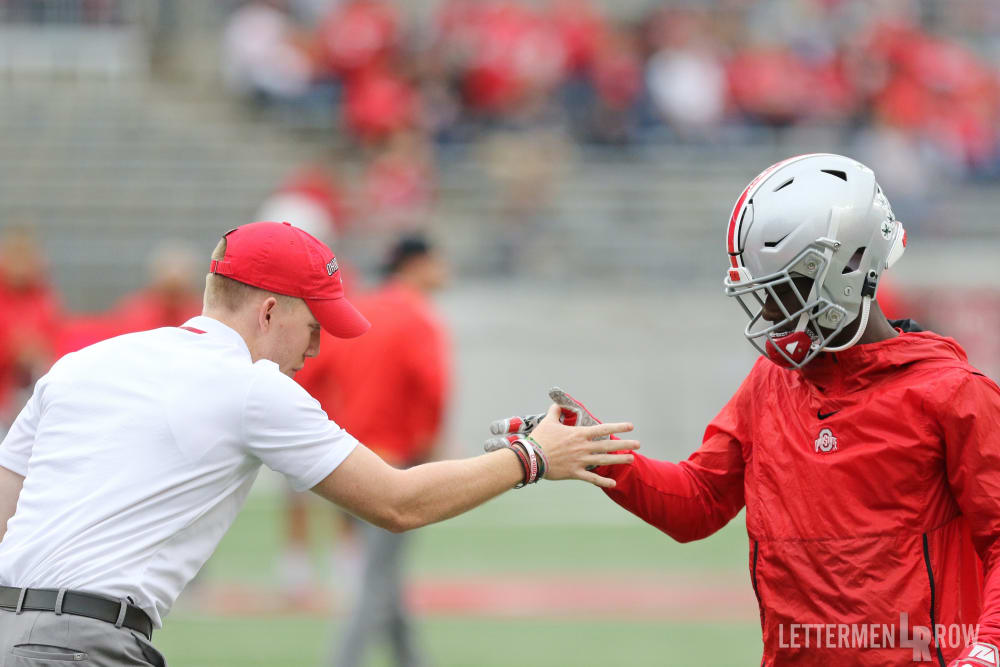 Keenan Bailey gets some credit for helping teach Demario McCall the ins and outs of playing receiver. (Birm/Lettermen Row)

“I feel like it made me a better football player for the future,” McCall said after practice on Thursday, the first fully-padded workout of the spring. “It helped my game a lot, not just as a tailback but as a receiver. My ball skills, catching and route running thanks to [wide receivers coach Brian] Hartline and [assistant receivers coach] Keenan Bailey. I’m reading defenses better also.”

Working with a talented group of future NFL receivers allowed McCall to learn what it takes to compete at the highest level. And he’s taken the example of Johnnie Dixon, Parris Campbell and Terry McLaurin and is running with it.

“Just watching those guys come out of practice every day, they’d tell me it was going to be hard — but seeing them go through it?” he said. “I had no choice but to trust them. To see them come out every day with theÂ same exact energy? It was motivational.”

After a nagging calf injury that had slowed him down already this spring, McCall appears ready to be the weapon Ohio State has envisioned. And he’s ready to do that from his most comfortable position: tailback. He’s not ignoring the lesson he’s learned in the last year though and that’s one reason why his former — and now current — position coach is so glad to have him back in his unit.

“All of a sudden you put in the backfield and shift him out to some empty sets and make linebackers go out there and cover him? That’s a matchup problem, we’d like to think. ”

What McCall wants is a chance to make an impact, and he doesn’t really much care what position he’s doing it from. He knows he’s more valuable to his teammates when he becomes that matchup nightmare Alford described.

“That’s the type of athlete I am, I can be a tailback and a receiver,” McCall said. “I feel like last year playing mostly receiver will actually make me a better tailback. Last year it was more: Find the mismatch, go find a linebacker to try and guard me, because that’s going to be tough.

“Hopefully I play a big role in the offense. I hope so. They’ve got me in the tailback room, I’m a tailback now, but I’m pretty sure I’m going to be put in the slot sometimes. Me and J.K. [Dobbins] splitting time, just being an athlete, being in the slot sometimes, special teams — just a ballplayer.”

Alford has witnessed his running back develop from a wide-eyed, always-grinning kid into a young man that’s stepping up to lead his position room. Even if he’s still doing it with a smile on his face. 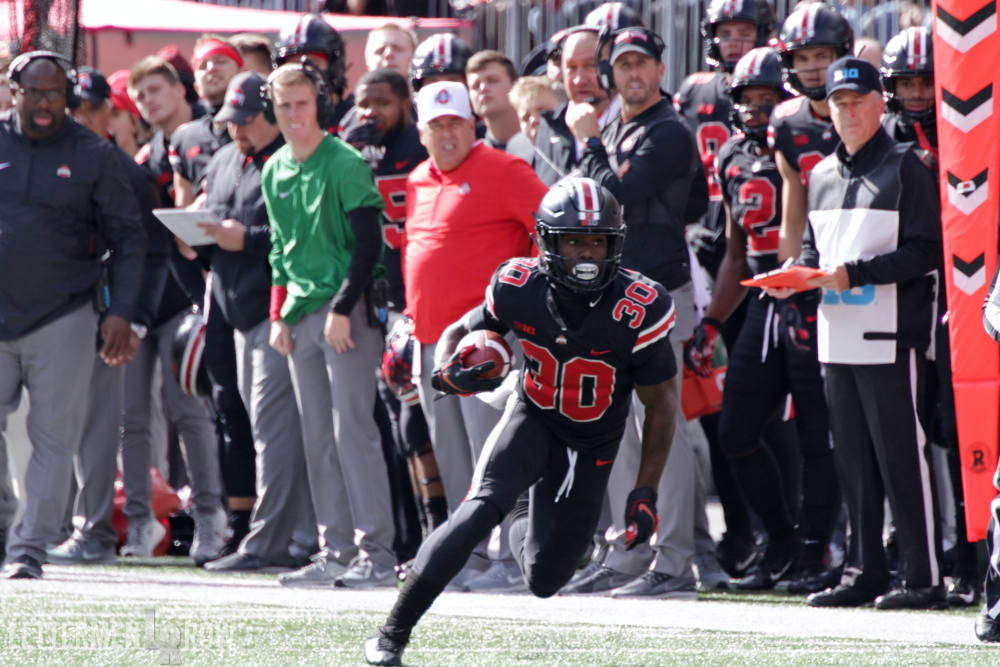 Ohio State is expecting Demario McCall to be an explosive option on offense. (Birm/Lettermen Row)

“A ton,” Alford said. “He’s like a grown-ass man. You’ve got to understand, I started recruiting him as a junior in high school and I’ve watched him just mature, immensely, and it’s fun to watch. He’s one of my favorites on this football team.”

After years of waiting, McCall is ready to do whatever it takes to make his time in Columbus count.

“It helped me, but then again, it was frustrating,” he said. “It made me a lot hungrier, but now I’m ready and I’ve got something to prove.

“I’m anxious to see what the future brings. I’m definitely physically ready and emotionally ready to take on whatever they’ve got planned for me. I feel like this year is going to be my biggest year. I definitely should have a breakout season this year.”