How depth chart might look for Ohio State running backs

COLUMBUS â€” J.K. Dobbins may carry the ball this season more than he ever has at Ohio State.

That’s not for lack of talent elsewhere, but Dobbins will finally be the only feature back in the offense. Mike Weber is gone, and the Buckeyes will break in a new quarterback â€” likely Justin Fields. As Dobbins enters his junior year, he’ll get his share of opportunities.

Ohio State has recruited well at running back, and the position room has some intrigue. The battle for the backup running back role is one to keep an eye on moving forward. Running backs coach Tony Alford has some decisions to make.

As part of Running Back Week atÂ Lettermen Row, weâ€™re breaking down who is a lock for playing time, who may find time on the field and who can expect to watch from the sidelines.

J.K. Dobbins, Jr.:Â There’s no question that J.K. Dobbins will be the lead back for the Buckeyes, and his workload will surely increase from last season when he split carries with Mike Weber. This season might be the most he’s had to carry the ball in his career, since during his freshman season, he still had to share with Weber and J.T. Barrett.

Not every school can have a junior running back who already has 2,456 rushing yards and 17 touchdowns, but Ohio State does. Dobbins will be on numerous preseason watch lists, and the running ability of Georgia transfer quarterback Justin Fields only figures to open more running lanes for Dobbins than he had last year.

Master Teague, RFr.:Â Teague left spring camp after an impressive string of practices and workouts, and he put himself in prime position to be the second back behind Dobbins. Teague discussed his growth during the spring, saying he’s more comfortable on the field this year than he was last season. His combination of speed and power make him a commodity on the field for the Buckeyes, and it’ll be hard to keep him on the sideline.

Of course, Dobbins is squarely in front of him. But as Master Teague keeps progressing in the offense, he’s leaving the talent elsewhere on the depth chart behind him. He’s making a push for meaningful carries for his second season. 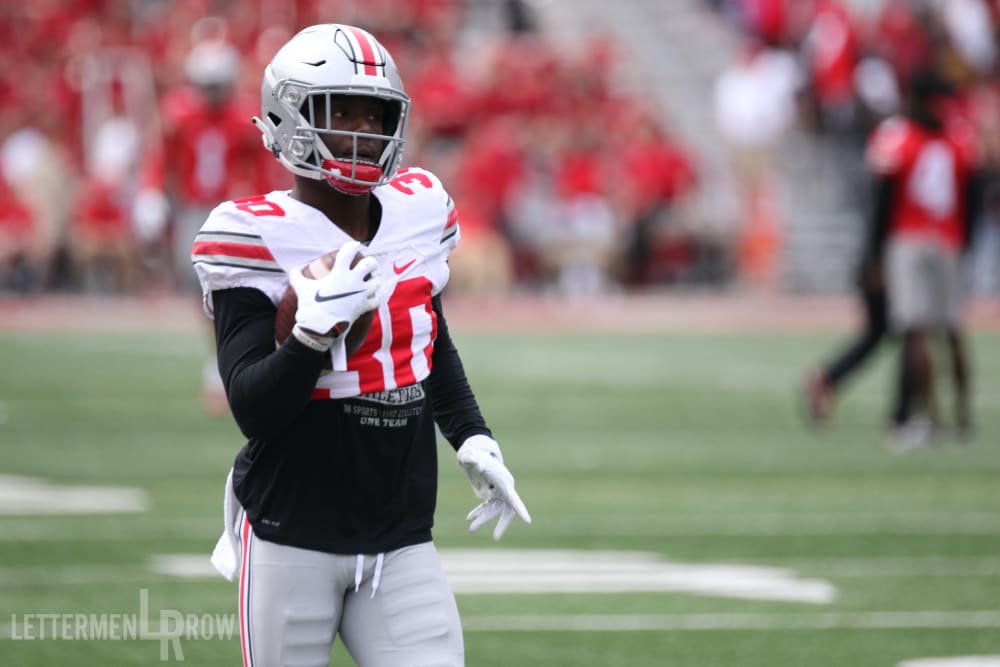 DeMario McCall has a big season ahead of him as he fights for reps at running back. (Birm/Lettermen Row)

DeMario McCall, Jr.:Â Ohio State has been waiting for Demario McCall to break out and have an impact since he stepped on campus, and it’s never truly come to fruition. With Weber out of the equation, that could change. McCall has been featured as a kick returner and punt specialist.

He’s also been swapped around as an H-back and a running back, and his versatility has actually in some ways made it tougher to find where he fits best into the offense. He’ll battle with Teague for the backup role, a position battle worth watching deep into fall camp.

Marcus Crowley, Fr.:Â Crowley is talented enough to play as a freshman. He enrolled in January and went through spring practice with the Buckeyes, but the depth chart is plenty talented ahead of him. If DeMario McCall becomes more of a threat in the passing game or as an H-back, Crowley could find some early playing time this season behind Dobbins and Teague. His path to the field as a freshman is still an uphill climb.

Steele Chambers, Fr.: The newcomer wasn’t around for spring practice as he finished up high school, which puts him slightly behind Crowley when it comes to adapting to the college level and learning his responsibilities with the Buckeyes. But Chambers arrived looking physically ready for the challenge right off the bat, and it will be fascinating to see his transition this fall since he could still potentially develop into a linebacker given his size and speed.